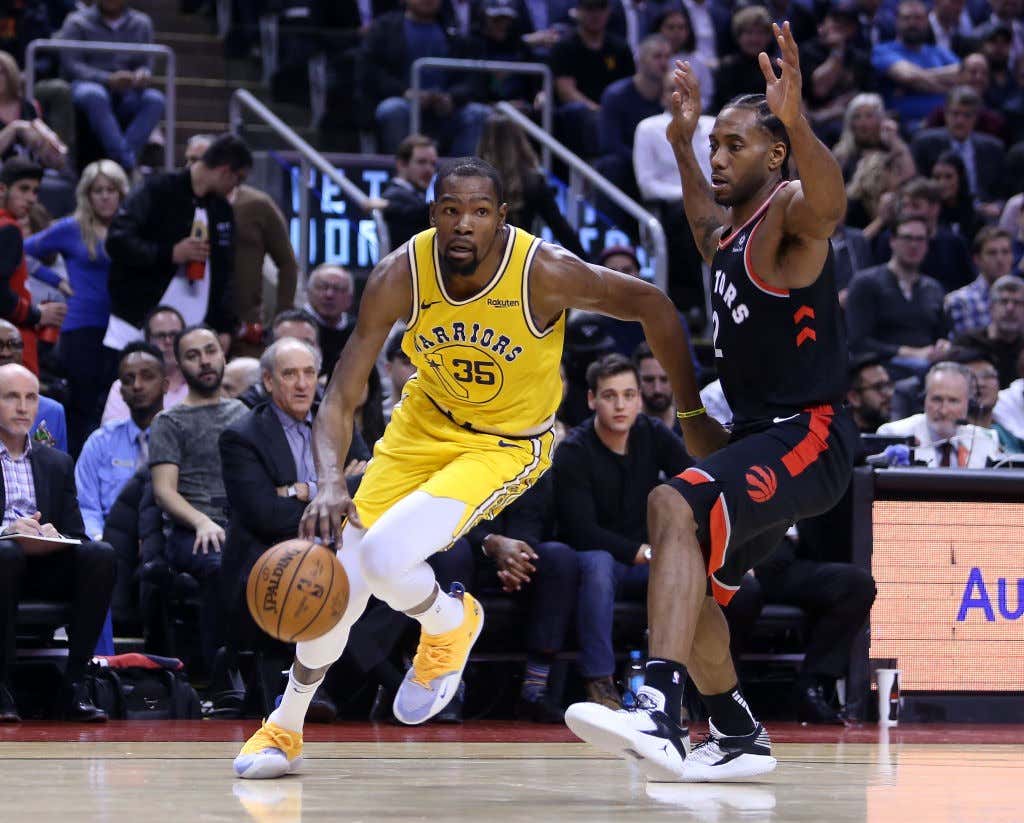 Happy Friday everybody and welcome to another edition of Last Night In The NBA where we bring you up to speed on everything that went down from the night before in the Association. It was a light night in terms of the schedule with only three games being played, but boy did we get ourselves some good games. Now I understand that there was also a pretty good football game on as well so there may be some of you that have no idea what went on, and all I can say is that the NBA brought the heat last night. If you have no clue what I’m talking about just keep reading. Here’s what happened

We may as well start with the best game of the night, and potentially one of the best games we’ve seen all year between two really, really good teams. This game was billed as a potential Finals preview, and man did it give us everything we could have hoped for. You go down the list and it delvered on all fronts. Kawhi vs Durant was awesome. Pascal Siakam had a career night. Drake talked shit, had it thrown in his face, and even had his nipple twisted. We got a thrilling ending that included two gigantic Durant threes, it was incredible. I guess I could stop telling you, and start showing you

Kevin Durant has been on another level over his last three. When you go for 44, 49, and 51 points, you pretty much are letting the world know you are still one of the best scorers on the entire planet. Klay did his best to help with 23

but it did feel like every wide open big momentum three he had, he missed. Obviously if you’re a Warriors fan this is whatever, I mean you were this close without two pretty important pieces in Steph Curry and Draymond Green, so if these two teams were to meet in the Finals, you add in a healthy Boogie to that and yeah they aren’t exactly going to look the same. Getting down by so much early gave us the fear that this was just going to be another blowout, but that’s the thing with the Warriors that we have come to learn. No lead, no matter how big, is ever safe. Ever. The battle between Durant and Kawhi was everything I hoped it would be, as neither guy could contain the other. You look at some of those shots Durant made down the stretch, and they don’t make sense. Those are bad shots for almost every other player in the league, but for him they are routine. What a talent.

For TOR, in my opinion it makes no difference to them that GS was missing players. No matter who your favorite team is, you have to concede that right now, without question, the Raptors are the best team in the NBA. You look up and down their roster and everyone played great. Obviously the lead story is the dominance of Kawhi

but it was more than that. Pascal Siakam, someone who fell into TOR’s lap at the draft, continued his breakout season with the best game of his career

What would make me happy as a TOR fan is that’s not even the full story. How about Serge Ibaka still coming up with huge shots? His 20 points on 8-13 shooting including a big time FT line jumper in OT was massive. Then you have the clutch shooting from Danny Green and Kyle Lowry, who threw dagger after dagger after dagger, and gave us one of the best photos of the year so far in my opinion 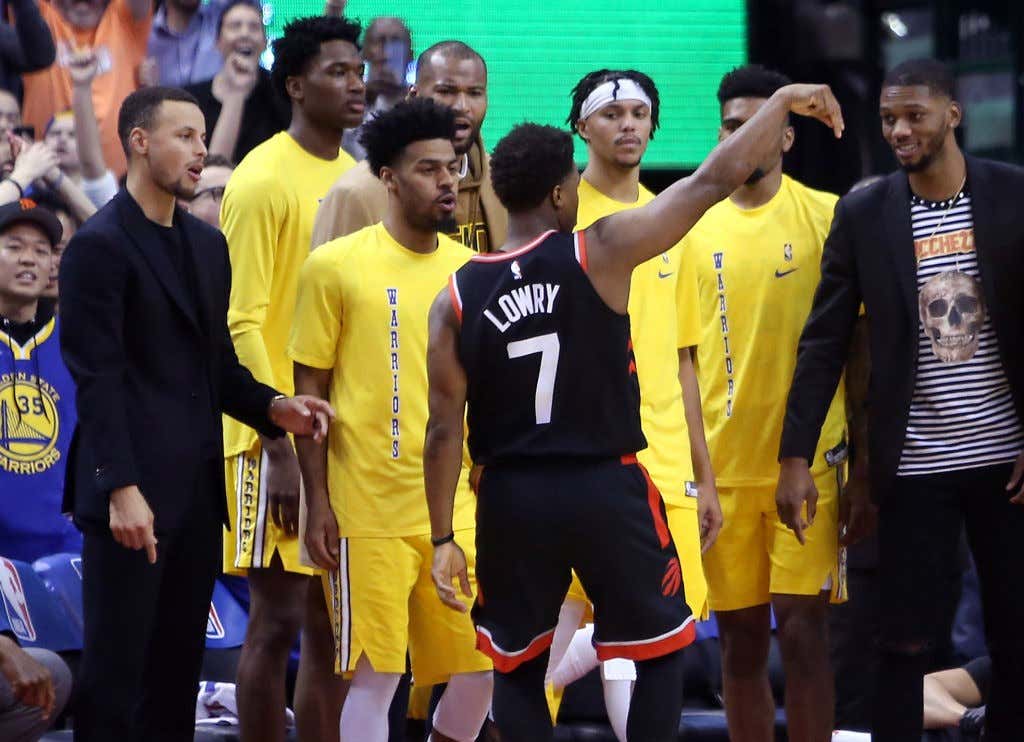 That was the most impressive thing about this win for me with TOR. They never pooped their pants, never freaked out that Durant made crazy shots, they just kept attacking. As expected points in a paint was a huge advantage for them, and that home court advantage is legit something real. I think they are something crazy like 14-1 or something close to it when leading after the first quarter. Now 10-2 at home, this is the best team in the league through November 29th. period.

It’s true, there were other games being played last night, including one from the best team in the West at the moment. The Clippers simply keep winning while not having a single All Star, and this now makes 10 wins in 11 games. I don’t care who you are, you pull off a run like that and you not only have my attention, but you have me respect. I’m taking the Clippers seriously and you should too. Whatever Doc is doing over there, it’s working big time

Considering they are coming off a B2B, putting up 133 points and shooting 55% from the floor is pretty impressive. Just when it looked like they were going to coast after a 42-26 first quarter, the Clippers did immediately give it right back and essentially had to win this game for a second time. It’s just pretty wild they put up this many points and someone like Lou Williams only went 3-10. But I would say you finish with 55/44% splits, make 12 3PM and only turn it over 9 times, that usually tends to work out for you.

For SAC, is the honeymoon over? They’ve now lost three in a row and 5 of their last 7, which personally I don’t hate but it’s not often you drop that many points at home and still lose. That’s why defense is important kids, you have to be able to stop your opponent every once in a while. Despite the loss that doesn’t mean there weren’t some Baby Kings that had strong showings

but it does feel like the Kings are on the edge about to collapse. On the court struggles combined with front office drama is usually the recipe for disaster, and if there’s one thing the Kings to best it’s chaos. Their schedule doesn’t get too hard with IND/PHX/CLE/IND/CHI on deck, but then the fun is over as they have a much harder rest of December. I’d hate to see them go on a massive losing streak, that would just be terrible.

Ah yes, LeBron was working last night too. While he won’t get many of the headlines, I would say 38/9/7 on 15-27 shooting is pretty immpressive

The Lakers came out with much better energy and shot out to a 38-15 lead after the first quarter, but just like the Clippers they immediately gave it right back losing the second quarter 35-18. That’s probably a little annoying for Lakers fans. The good news is the kids did just enough in the second half to avoid blowing the game

and for a team that struggles defensively I thought they were actually OK in this one. They caused 17 TOs and held IND to just 37% shooting and while you don’t love that LeBron had to play 38 minutes, you take the win.

For IND, still without Oladipo which obviously hurts them and it was a tough go for their starting backcourt. Hard to win on the road when your two guards go 5-22. In fact, all of the starters were pretty much garbage and the Pacers were really only in this game because they got 47 points from their second unit. I give them credit, they clawed their way back into this game, making it close in the third quarter, they simply didn’t have enough firepower for those final 12 minutes.

I’ll say this though, I do enjoy their Hickory High jerseys. Those things are big fire. It’s also encouraging for any sad Pacer fan out there that their schedule is pretty light over the next handful of games with SAC/CHI/ORL/SAC/WSH up next.

And that’s it! You’re now all caught up on everything that went down from last night in the NBA. We’re back tonight with 11 games so go out and enjoy your Friday night and just check back in the morning and I’ll fill you in on what you missed.