After years of guzzling beers, gorging on enormous hangover meals, and generally making horrific health decisions, the guys at Hard Factor News are looking to shift the tide and take back our health (or at least lose enough weight where we can keep partying indefinitely without fear of a heart attack). As you can see in the graphic below, we are all extremely unhealthy: 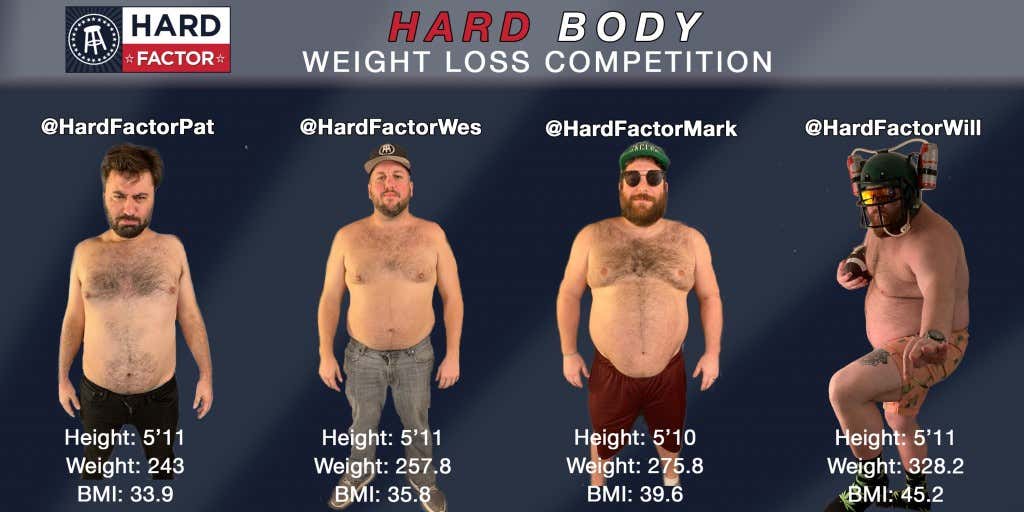 We’ve all taken different paths to get here. Look at Pat for example, while he may not look fat, he is afflicted with extremely heavy legs and they have grown LARGE from pizza and red wine. Pat uses those haunches to support his busy days of working on a laptop and snaking on potato chips, so it’s no wonder he’s fallen so far.

Wes has always treated his weight like a yo-yo, ranging between “mildly chubby” and “definitely husky” depending on how intent he is on winning over a potential mate. Just like all the Hard Factor fellas, Wes enjoys his share of beers in the fresh outdoors, too bad for him he used to enjoy them out on the links and now he’s just slugging them on his back patio next to a tray of appetizers.

Then there’s Mark, who as little as 8-9 years ago was an athletic specimen that would run half marathons like they were Sunday strolls in the park… but then he decided to stop running and turn up the intensity on booze and brunches, and you can see the results for yourself.

Finally, Will. He’s by far the largest of the group, has always been a large fella, and has been getting larger and larger as time goes by. While he is known for being capable of working out pretty hard, he’s also know for blacking out at parties and eating whole sticks of butter on a single slice of bread. As of now, our Twitter polls have him favored to either win it all or lose it all, and that is a very accurate prediction.

Regardless of how we got here, now we’re trying to shed that man baby fat and get those bodies hard(er). We’re going to hit the diet and exercise as hard as we can while still keeping our jobs for 16 weeks and see who can lose the highest percentage of their bodyweight. With the help of our dietician, hopefully we can bring you some good transformation stories, and then make a painfully embarrassing video of the loser doing something against their will for your enjoyment.

Welcome to the thunder-dome that is the Hard Factor: Hard Body Competition.