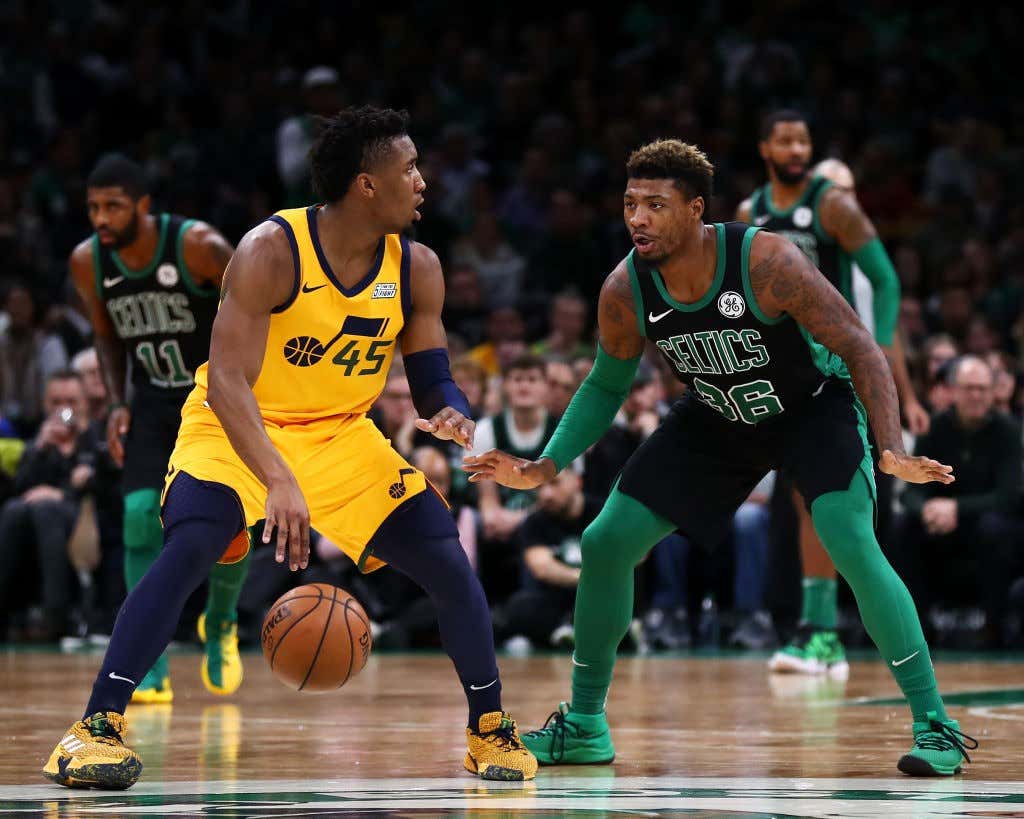 It’s not exactly rocket science for me to say that the Celtics have had a laundry list of issues that have put them in the position they are currently in. We’ve all spent time on focusing on the sexy issues like shooting, lineup changes, rotations, offensive struggles etc, but since they’ve been off for a million years and because I have mental issues, I’ve spent this whole time looking for more reasons as to why this shit is happening, and I feel like I came across an area that I feel like nobody is really talking about, but is a legit gigantic problem that needs to be addressed immediately.

The Boston Celtics are horrific in clutch defense situations.

If you’ve watched them play this season you see a common theme. Get down early, sometimes by as much as 20+, and spend the rest of the game clawing back only to make it somewhat close in the fourth quarter, and each and every time they’ve needed just ONE stop on the defensive end, they’ve been unable to get it. Just so we’re all on the same page here, the NBA defines “clutch” situations as 5 minutes or less in the fourth quarter with the score within 5 points. To be honest, this was also an issue last year to some degree, but it’s been so much worse this season. Allow me to explain.

Overall, the Boston Celtics have the 2nd best Drtg in the NBA at 103.1. Pretty good right? Well that number jumps to 107 (12th) in the fourth quarter and a very, very bad 122.5 in “clutch” situations. That’s the 26th best defense in the NBA in those situations. Let me put this into perspective for you. Last season, the Celtics were among the worst in this area too, but their rating was 107. That’s a gigantic difference and a big reasons why the Celts are 2-2 in games decided by 3 points or less, and why whenever they are getting into tight spots against shitty teams, they are not coming through. Defensively, they’ve been pathetic. A quick look at some of the biggest offenders this year in the clutch 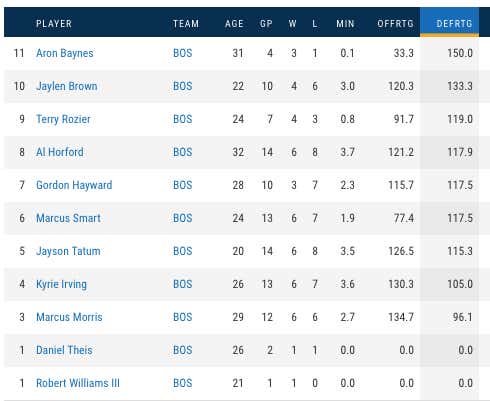 you see that many of this teams “best defenders” are pretty awful. For comparison, here was how everyone looked last season 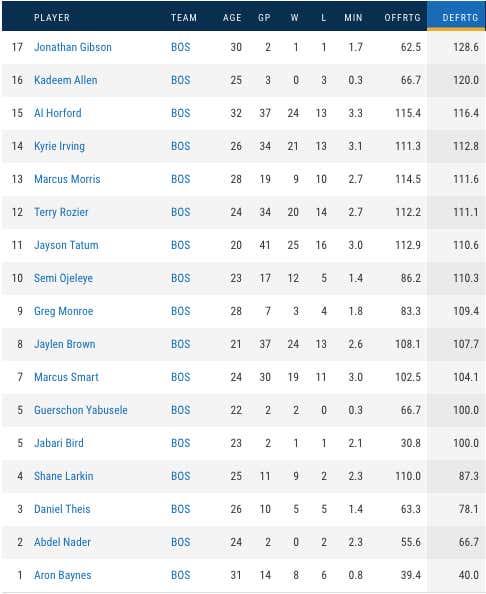 Right off the bat you see huge regression from guys like Smart, Jaylen, and Rozier. That passes the eye test since we all can agree those three have struggled so far this year to play consistent defense.

So after learning this I was curious to see what lineups did the best, and that maybe this new combination might be the answer. Well, when you look closer you sort of see why Brad made the changes that he did the other night.

In the fourth quarter, Brad has used this lineup the most: Kyrie/Smart/Tatum/Hayward/Horford.

As you can see, it’s not as simple as just inserting Smart in place of Brown with the original starters. For whatever reason that is not getting it done. Then you look at a lineup that is tied for the second most minutes in: Kyrie/Brown/Smart/Hayward/Horford

But what I found interesting is if you look at the other lineup that is tied for the second most minutes that Brad uses, one that may look familiar to what we just saw: Kyrie/Smart/Tatum/Mook/Horford things are drastically different.

Ummmm holy shit. This backs up what we saw against NO doesn’t it? Every time the Pelicans made a run, the Celtics were able to punch back. When they needed a stop they got it, so for the time being it looks like this combination might be the way to go.

We also see similar success with the traditional starters in: Kyrie/Brown/Tatum/Hayward/Horford

Only Brad hasn’t used this all that often. This is a combination that has the 5th most minutes together in the fourth quarter.

We all agree the biggest advantage of having someone like Smart is to use him to close games. Well that only really works if he’s going to defend at a high level. With both Kyrie and Mook showing real improvement in clutch time defense, it makes sense that this new lineup saw some success.  It’s clear that Brad has been trying everything to figure out what combination works, and we have enough evidence to suggest that when it comes to tight games down the stretch Brad needs to ride with either the lineup we saw against NO, or the five that we all thought would be starters when the season started. I would say it’s pretty interesting that someone like Smart is part of the worst two defensive lineups but also part of the very best. To me that just goes to show how inconsistent he’s been on that end of the floor.

With a team like the Celtics that refuse to play into contact and get to the FT line, scoring is going to be an issue. That means more often than not they are going to find themselves in tight games down the stretch in the fourth quarter, which is why this issue is so important to me. If this team can’t rely on elite level defense when the pressure gets highest their fucked. So this means Brad needs to be aware of his lineups, if he doesn’t have the right combination and a team is making a run, he NEEDS to be better and call a timeout and get one of those good combinations in there. It means that Smart is going to have to stop relying on his reputation and actually show up, just like he did against NO. Good teams in this league are at their best in the last 5 minutes of a close game, and it’s an area the Celtics have prided themselves on over the years. So far this season it’s been pretty pathetic, and in my opinion is a major reason why this team is 11-10.

Get stops when it matters, and the rest will take care of itself.