If I could just talk to my fellow fat people for a second…  More specifically, fat guys.

I have an event later on tonight and needed another dress shirt because I burned most of my formal wear after I decided to leave* my old industry.  I am not at the top of my weight range (319 pounds was my meringue peak), but I am still tough to look at.  Inevitably, this need for awkwardly tailored clothes led me to yet another trip to Rochester Big & Tall.

Most of you have no idea what that trip is like, but for me, it is always a roller-coaster of emotion.  I immediately have to swallow my pride as I walk through their oversized doorways because I am not so big that I have no other options…  There is an argument that my destiny is in my own hands.  I have never made enough dough to have things custom-made, but if I was to drop maybe 40 pounds or so, I could probably find tall sized shirts in other “regular” stores.  But my aversion to diet and exercise has left me with a perfect storm of heft plus height which in turn leaves me no option when it comes to finding dress shirts that need to have a tailored fit…  So Big&Tall it is.

I mentioned “roller coaster of emotions” because there is also something surprisingly soothing about going into a store and seeing racks upon racks of clothing that is actually, too big for me.  I will often loop a 72″ belt around my waist and mockingly use it like a hula hoop…  All the while being careful not to look outside the window of the shop only to be brought back down to earth by seeing passersby that can actually fit underneath an umbrella.

I think that is why most B&T’s don’t have windows.  The owners of these establishments want them to be safe spaces for hefty folk like me.  So the addition of big bay windows might lead to crowds of people gathering outside to watch my people, try on shoes.

“Hey look…  The bald one has to come up for air before tying the other one!”

I may have mentioned this story before, but I was once in a spacious dressing room in my local B&T and there was a sizable dollop of whipped cream on the reinforced bench…  At least I hope to God it was whipped cream.

But I should not shit on these stores any longer because they fill a need and I am amazed there aren’t more of them.  The fact that every major clothing company does not also have a B&T option seems like such a missed opportunity.  Obesity rates are climbing last time I checked the newspaper my fish and chips came wrapped in, so the Rubenesque seem like a demographic that are literally low hanging fruit.

Case in point:  This was the “Fattest Man in the World” according to Ripley’s in 1948… 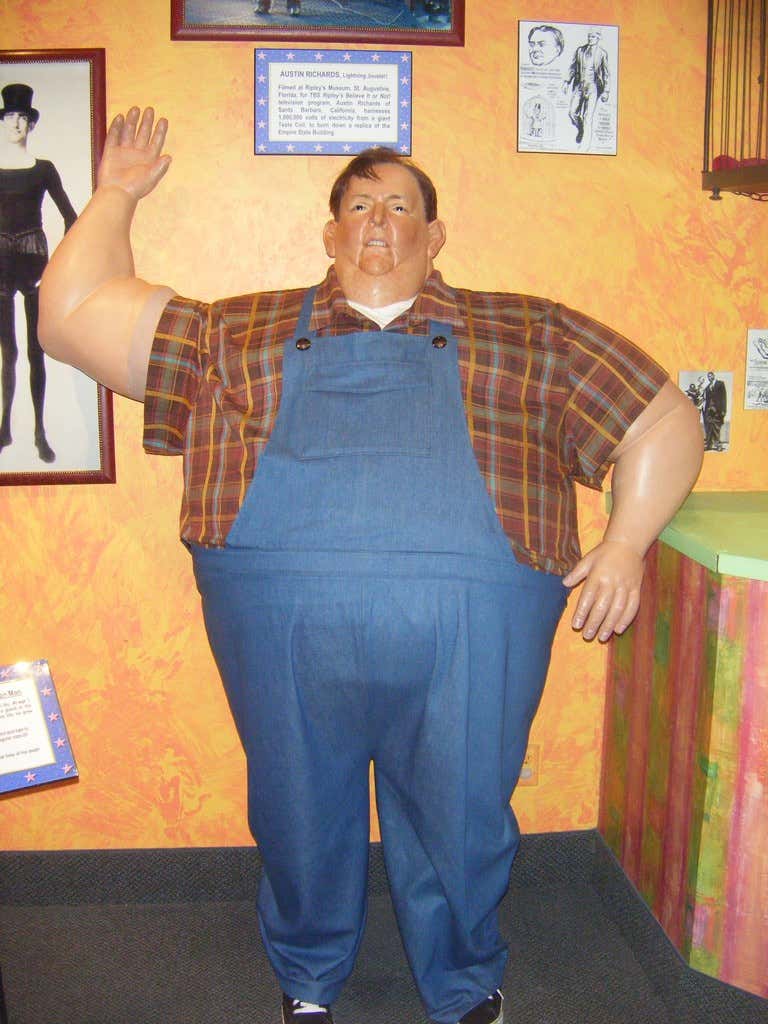 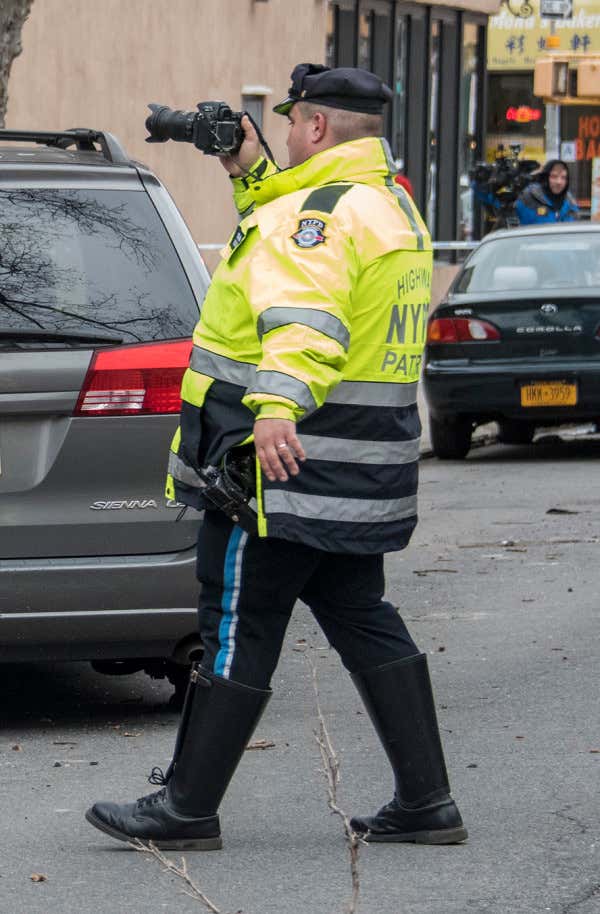 (I fucking HATE New York, by the way)

Like it or not, the anomalies have become the norm.

You don’t think heavyset cops, firemen, deli workers, politicians, athletes, bloggers, etc should have more options than just the local Big & Tall?  We obviously have enough disposable cash to spend on pastries.  You don’t think we could funnel some funnel cake dough into paying for fashion?

Why isn’t there a Fat Gap? 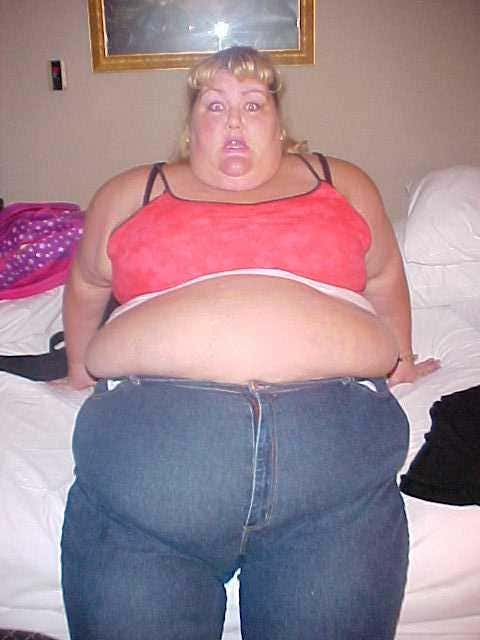 Why isn’t there a Banana Cream Pie Republic?

I’ll take the high road and say the reason major clothing chains don’t offer stuff for the over-zoftig is that they don’t want to enable a society that is eating itself to death.  But this reasoning cannot be reasonable because these are the same stores that are making thong underwear for grammar school aged girls…  So if their moral barometer prevents them from enabling the hefty, then shouldn’t that same barometer prevent them from fostering whorish behavior in our youth? 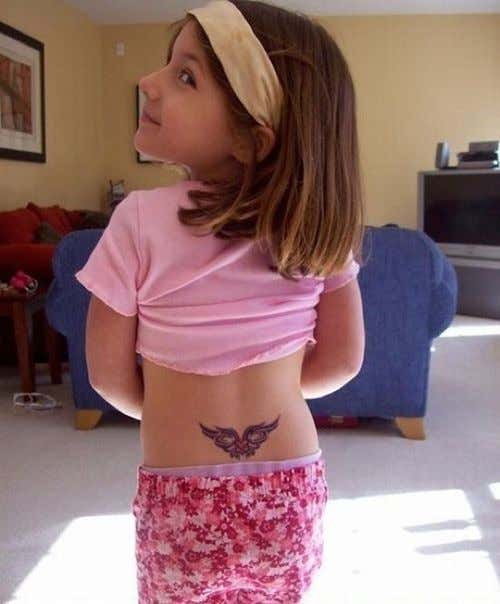 No.  I think quite simply there are not enough options for fat dudes because we are the forgotten members of society.  There are at least 3 cross-eyed gents in my office, and they go about their business with nary a complaint.  100 years ago, these cockeyed bastards would’ve been burned at the stake.  But then I walk into that very same office with my extra 50 pounds of skin, and I am looked upon as a big bloated plastic bag of Hepatitis C that is splitting at the seams.

I have been called an “old racist weirdo” by a website that may or may not still exist, but I wonder if that same website knows the shame I feel in my heart each day after the looks I receive from heartless “thinnies” that I work with like Pat, Vibbs, or Robbie Fox… With their narrow waists and thick hair.

And don’t get me started on the girls at Barstool…  If I were to look at your chests the same way you leer at my love handles, I would be fired on the fucking spot.  No matter how much I resemble that photoshopped cow picture that was circulating earlier this week, I am not a piece of meat, ladies…  And I am looking at a (tasteful) picture of you as I type this, Erika. 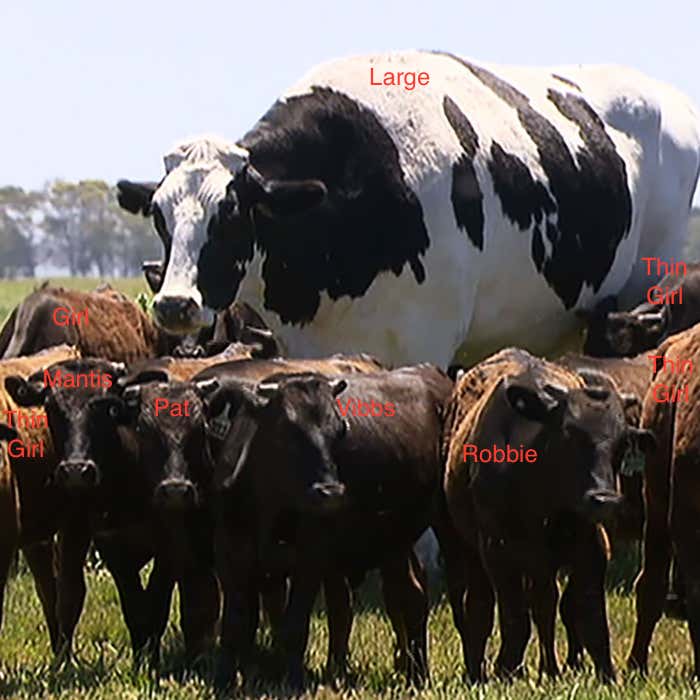 I gotta go…  I have a breakfast calzone in the fucking oven.

* I keep saying I left my old profession, but I think we all know I was fired from my last job.