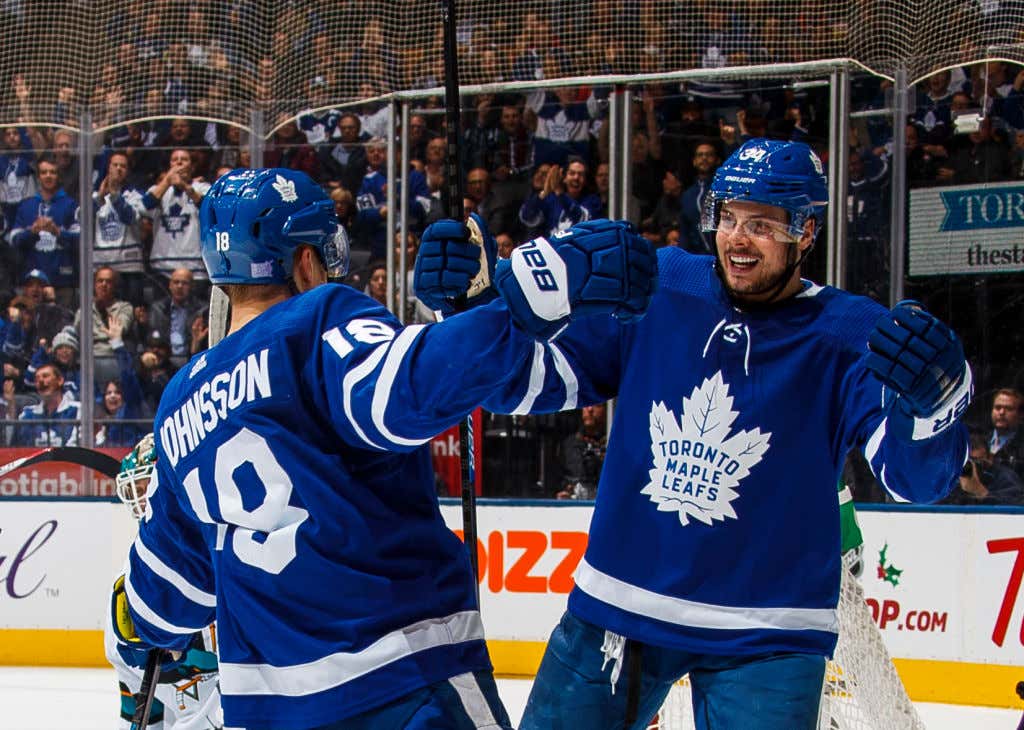 Auston Matthews. If you’re a die-hard hockey fan, you’re probably familiar with the name at this point. He’s the kid from Arizona who was able to make it out of the desert and into the NHL. If you haven’t heard of him before then I suggest looking it up. Great story.  But anyways, Auston Matthews got his 2018-19 season started by scoring at least 2 points in each of his first 7 games. It was pretty ridiculous. He was leading the league in points with 10 goals and 6 assists through just 7 games. Then he had a few games where he wasn’t able to find the scoresheet. And then he got injured against the Winnipeg Jets on Saturday 10/27. He hadn’t played in a game since after going on IR with a shoulder injury.

Last night, Young Auston made his return to Leafs’ lineup. Unfortunately since the last time Auston hit the ice, Mikko Rantanen and Nathan MacKinnon have shot the fuck up the leaderboard with each of those two savages having over 40 points before December. That’s another blog for another time. But obviously Matthews has some catching up to do considering he’s missed 14 games and hasn’t registered a point since 10/15. So what does Auston Matthews do in his first game back from injury?

Well he collects an apple on the first goal of the night last night with this dish to Toronto Maple Leafs Legend John Tavares.

Beauty of a slap pass cross-ice from Marner to Matthews. And then this is what makes Auston Matthews so deadly. His shot is so nasty that whenever he gets the puck on his stick at that spot, you have to assume that he’s ripping it. So everyone is thinking shot, but Auston Matthews is already a few steps ahead. Instead of the shot, he sees Johnny On The Spot at the back pipe, quickly kicks it over to 91 for an easy assist. First point of the night. And a little later in the 1st period, on the powerplay again…

Get the fuck outta here with that release. What a beast. I’ve said this before but we’ll run this one back–that left face off circle on the powerplay is an absolute Kill Zone in the NHL. But the guys who we typically see murdering goalies from that spot on the powerplay are Alex Ovechkin and Patrik Laine and Steven Stamkos. All of those guys are right-handed shooters. Matthews is on his opposite side there as a lefty posting up in the left face off circle. But he’s still just as lethal from that spot because his release is so sneaky and so quick and he fucking ropes this one short side top bunk. Good lord.

And then later in the night, Matthews put the dagger in the game after he got credit for this deflection to make it 5-2 in the 3rd.

Not the prettiest goal Auston has ever scored in his career but he’s battling in front of the net with Joe Pavelski and with this goal, I think Auston Matthews just ripped the “C” off of Pavelski’s Team USA jersey and slapped it on himself.

2 goals and 3 points on his first game back after missing a full month of hockey with a shoulder injury. That gives him 19 points on the season. I wouldn’t be surprised if he catches everybody by Christmas.

P.S. – I decided that I’m going to write at least 4 Maple Leafs blogs today. It’s about time somebody in the hockey media has the balls to cover this team. So I’ll be the guy to do it. Buckle up, folks. It’s gonna be a day.