Last night was a very busy night at The Ohio State basketball game. The 6-0 Buckeyes welcomed a blue blood Syracuse program to town (we lost, now 6-1), and Thad Matta got a banner recognizing his accomplishments hung in the rafters. But neither of those were the main story afterwards as we all headed out of the Schottenstein Center into the blistering cold. It was the kid in the hot dog suit at halftime that shot his shot with the reporter, and then hit his half-court shot to win free hot dogs for a year.

“Most people call me Robbie, but you can call me anytime.” Swish. 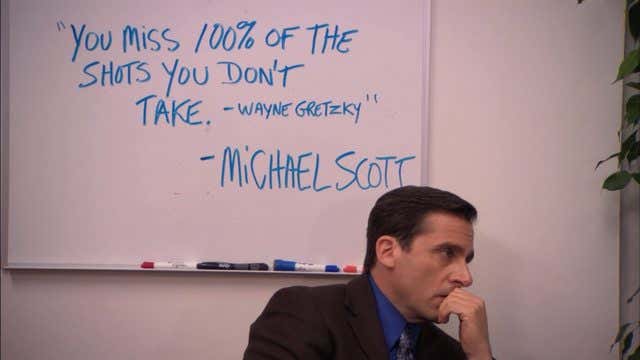 But this outcome had the Buckeye fans going nuts and HAS to mean he’s getting a date, right? I will check with my inside sources within the University to get you all an update. But anyways, he just showed huge confidence and then sunk a half-courter. Major game on and off the court. What else would a girl want? Plus the fact that the prize is free hot dogs for a year means that he can provide for her too!  Sounds like she found herself a real wiener. Only knock on him is that he did miss a golden opportunity during the interview. When dressed in a hot dog costume and being asked questions, you have to drop the famous Jonah Hill line from Accepted.

The only other thing I didn’t like about this entire situation was the prize. Free hot dogs for a year? Quite frankly, I think that is disgusting. Don’t get me wrong, I always relish the opportunity to eat a fine dog, but I don’t think I could mustard up enough strength to eat one day after day after day. There’s nothing special about hot dogs. Sure, they’re good from time to time, but I can make them at my own house. Well, unless it’s a Gene and Jude’s hot dog.