Controversy erupts in a game in the tightly contested AFC East, as the New England Patriots beat the Buffalo Bills 25-21 on a walk-off touchdown from Drew Bledsoe to Ben Coates. The Bills were angered by two late calls extending the drive, including a pass interference call that gave New England an untimed down at the end of the game, a call the NFL later admitted was a mistake.

Bad officiating was the story of Week 13, as the week began with Phil Luckett’s infamous blown coin toss on Thanksgiving. Heading into that week the AFC East was the most intriguing battle, as the Buffalo Bills, Miami Dolphins and New York Jets all had records of 7-4 on top, while the New England Patriots were one game back at 6-5. As the Dolphins were beating the New Orleans Saints 30-10 and the Jets beating the Carolina Panthers 48-21, all eyes were on Foxboro as the Bills and Patriots had a late afternoon kickoff.

The Buffalo Bills led by Coach Wade Phillips came in red-hot, winning seven of their last eight games, after a 0-3 start. Leading the resurgence was a change at quarterback as Doug Flutie after a decade in the CFL, returned to the NFL and took over for an ineffective Rob Johnson. The New England Patriots in their second season with Peter Carroll as their coach were scuffling a 6-5 having lost to the Bills 13-10 in Buffalo two weeks earlier. 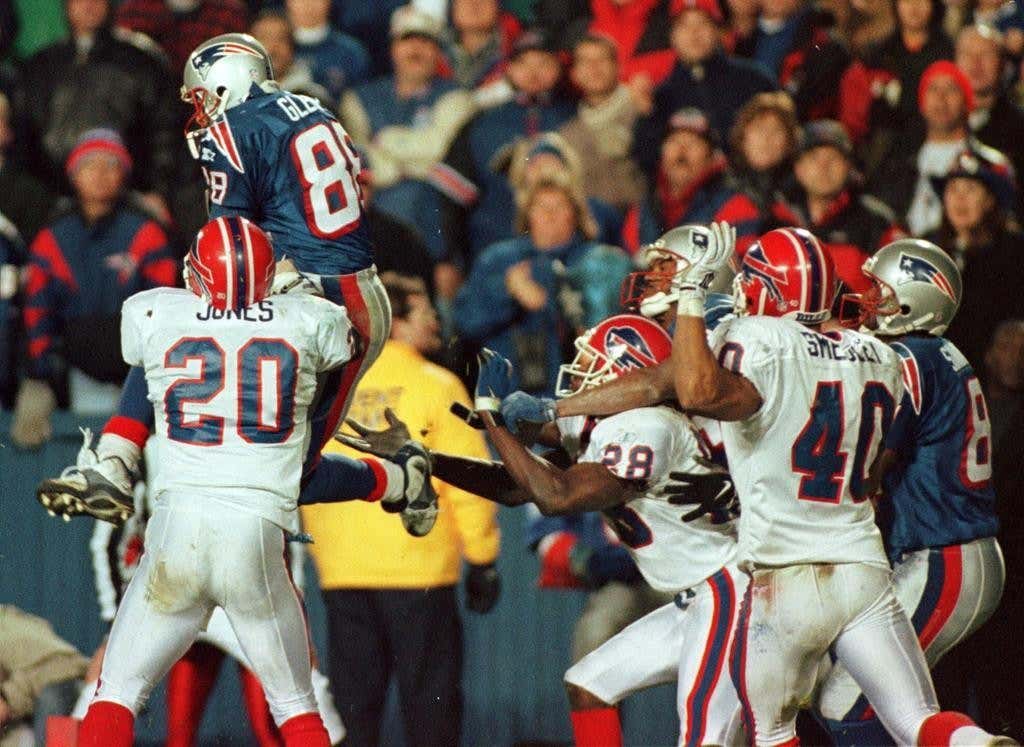 After a scoreless first quarter, New England took control of the game in the second quarter, scoring two touchdowns as Drew Bledsoe completed scoring plays to Robert Edwards and Derek Cullors. The Bills first points came courtesy of a 34-yard field goal by Steve Christie with 1:25 left. Buffalo added a second field goal by Christie to go into the locker down 14-6, as Doug Flutie completed a 55-yard pass to Kevin Williams. The big play came up again for Buffalo in the third quarter, as Flutie had an 84-yard pass to Eric Moulds to make it 14-12, as Buffalo’s two-point attempt failed. The Patriots extended their lead to 17-12 on the next series as Adam Vinatieri nailed a 44-yard field goal. The Bills got a third field goal from Steve Christie and went into the fourth quarter down by just two points. In the fourth quarter, Buffalo took the lead 21-17 as Flutie connected with Andre Reed on a four-yard touchdown pass, but once again missed the two-point attempt. Down by four, the Patriots had no timeouts had the ball at their own 18, with 1:52 left. Playing with a broken finger, Drew Bledsoe had to rely on short passes to get the ball down, the field. However, it was bleeding time off the clock, as the Patriots were down to 11 seconds left as they faced fourth and nine from the Buffalo 36. Needing to get a first down and stop the clock, Bledsoe tossed a sideline pass that was caught by Shawn Jefferson at the 26 with six seconds left. However, it appeared that Jefferson did not come down in bounds with the catch. After a long huddle, in which several Bills overheard one official say “Just give it to them”, the Patriots had one last chance to win the game. Bledsoe tossed a pass to Terry Glenn in the end zone, which fell incomplete as time ran out. However, Henry Jones was flagged for pass interference, giving New England an untimed down from the one-yard line. This play further angered the Bills, as the NFL later admitted the penalty was called in error. With the untimed down, the Patriots would get the game-winning touchdown as Ben Coates caught a lofting pass from Drew Bledsoe in the end zone. The Bills stormed off the field in anger as they were enraged by the two blown calls as the Patriots celebrated. The Patriots lined up for the extra point with the Bills heading to the locker. This led Pete Carroll smiling like that cat that ate the cannery to call for a two-point try, which Adam Vinatieri ran into the end zone to make the final score 25-21. The last play angered gamblers who suffered the bad beat with the Patriots three and a half point favorites.

After the game, the Bills were furious as both teams held records of 7-5. The game further demonstrated the need for instant replay in the NFL. Both the Bills and Patriots would make the playoffs as four of five teams in the AFC East made the playoffs. The Bills would lose to division rival Miami 24-17, while the Patriots lost to the Jacksonville Jaguars 25-10 with backup Scott Zolak under center. The controversial ending helped further the momentum that would bring instant replay back to the NFL for the 1999 season, using a new challenge system.