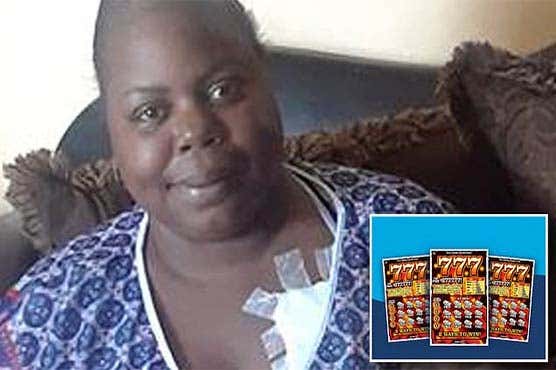 AP- A North Carolina woman who was given the wrong lottery game ticket is celebrating that mistake. The N.C. Education Lottery said in a news release that Zerineia Carmichael of Goldsboro wanted to buy the Carolina Panthers lottery game ticket Sunday, but the store clerk gave her a “777” ticket instead.

Carmichael said she normally would have asked the clerk to give her what she asked for, but she decided instead to keep it. When she began scratching off the card in her car, she thought she had only won $7. She said she kept scratching and seeing more 7?s. When she was done, Carmichael had won $277,777. After state and federal taxes, she took home $195,837, part of which she said she plans to use to get a new car.

Usually seeing someone fall ass backwards into hundreds of thousands of dollars would make me sick to my stomach. Granted some of that is due to the cheap C-grade meat I buy at the grocery store since I am a poor smut blogger with three other mouths to feed at home. But I have nothing but love for Zerineia Carmichael. You know why? Because she just taught everyone that read this blog a very important lesson. Sure Mrs. Carmichael had the right to tell the employee at that convenience store to fuck off and give her the Panthers lotto ticket she wanted before Cam and the fellas took on the Seahawks.

But one of the biggest unwritten rules of lotto is that if someone gives you the wrong lotto ticket, you buy that ticket as well as the one you originally wanted every single time. Yeah you are spending more money on the lotto ticket dream than you initially budgeted (JK, nobody that buys lotto ticket even knows what a budget is). However the only thing worse than lighting a few extra dollars on fire is watching the person behind you take that ticket and win your money. Then you go from lighting money on fire to lighting yourself on fire. I guess there is another way to deal with giving someone else your lifeline from God. But I think I dousing my fat ass in gasoline and lighting a cigarette would be less painful than peacefully going on with my life knowing I gave someone else my ticket out of this lower middle class life.

P.S. I don’t know which new car Z Money is going to buy with her $200K fortune, but she better throw a few bucks at that store clerk before he lights himself on fire. Because while the Good Juju Gods smiled upon her this week, catching a depressed store clerk’s body on your conscience is bad juju city for someone that just fell into a bunch of newfound money.