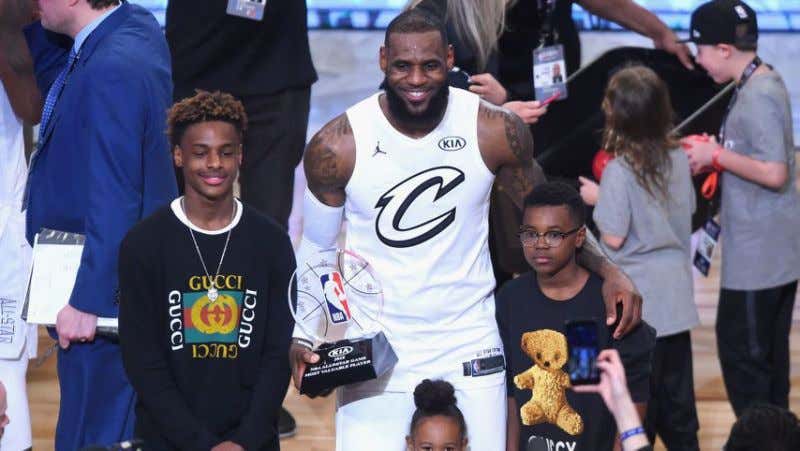 A father/son both playing in the NBA isn’t all that rare. That shit happens all the time whether it’s the Curry’s, Wes Matthews and his father, Gerald Henderson and his, Doc and Austin Rivers, Stan and Kevin Love, Joe and Kobe Bryant, Mychal and Klay Thompson, Rick Barry and his kids, Jimmy Walker and Jalen Rose, etc. Not really rocket science that NBA players have kids who also end up being good at basketball and playing in the NBA.

But what I’m almost positive we’ve never seen is a player and his son play at the same time. I could be wrong, but I’m feeling confident in that statement. So to hear LeBron talk about potentially playing with/against his son is pretty wild. LeBron only needs to play 5-6 more years? No problem. He just needs to make it to what, halfway through his next deal? He’s only 33, and we’re already seen guys like Dirk, Manu, Vince Carter stay in the league into their 40s and I think it’s fair to say they are not exactly the same exact type of athlete LeBron is. Even if you’re a big time LeBron hater you can’t lie that if that moment happens, it’ll be cool to see.

Now where this would scare me as a Lakers fan is if LeBron signs another deal to stay in LA, you can take it to the bank that he’s going to find a way to force Magic to take his son. You thought LaVar Ball had the power to make sure they drafted Lonzo, well multiply that by about a billion. God forbid if LeBron ever brings a title to LA in that timeframe, there will be other choice for Magic and the Lakers front office. A quick Google search told me that Bronny Jr is the 25th ranked player in his class as recently as September, and I guess he already has standing offers from Duke, Kentucky so really this is just a matter of time.

For those of you who have never seen Bronny Jr play, below is a mixtape for you. Little different than most of us when we were in the 8th grade I would say. Pretty sure I was pumped to be able to touch the backboard on a layup.