HONOLULU (AP) — A man who suffered a heart attack shortly after Hawaii mistakenly issued an alert about a ballistic missile filed a lawsuit against the state on Tuesday.

The false missile alert and the state’s failure to cancel it in a timely manner was a substantial factor in causing James Sean Shields’ heart attack on Jan. 13, the lawsuit said.

His girlfriend Brenda Reichel joined the lawsuit, having suffered “emotional upset” from watching him almost die on several occasions.

THANK YOU!  This is the question I’ve been asking since this thing happened – I can’t find the blog I mentioned it in,  but trust me.  My biggest question was, well what about the fucking people you scared to death with this thing?  What about the people who had heart attacks?  Who fainted and smashed their head?  Who gathered together in a room and drank the Kool Aid and fucking killed themselves?  I mean it had to have happened.  There are old people all over that island.  You’re telling me a bunch of them found out Kim Jong was smashing them with a nuke in 15 minutes and didn’t drop dead?  Nobody committed suicide?   That was the first thing I thought when I saw Deep Impact starring Morgan Freeman – if I saw that big ass wave coming, I would kill myself.  Fuck drowning.

Speaking of…that’s exactly what this couple decided to do.

The lawsuit recounts how the couple was heading from their townhome in Hawaii Kai to Sandy Beach on Saturday morning when they received the alert on their cellphones.

This one is okay because it’s a missile strike and you’d die instantly. That’s different. Big wave – bad on beach. Missile – okay.

Oh, and it’s not just heart attack dude. It’s his girlfriend who had the emotional distress of watching him almost die too.

And I don’t blame her. Look at this shit.

Reichel’s son, who is in the Hawaii Army National Guard, called her saying the threat was real and asked what they planned to do to seek shelter. The couple called their loved ones as they drove to the beach. Shields began to feel a severe and painful burning in his chest after he called his son and daughter.

Shortly after, he went to a community clinic, where he suffered cardiac arrest. A doctor resuscitated him, while arriving paramedics assisted him further. He was diagnosed with a myocardial infarction or heart attack after he arrived at Straub Hospital, the lawsuit said.

I mean, not getting cheese on your McDonald’s cheeseburger is not emotional distress.  Watching the man you love technically die on a table probably is.

Know who the first person going down is?  The Governor who couldn’t tell people the missile was a false alarm because he forgot his password. 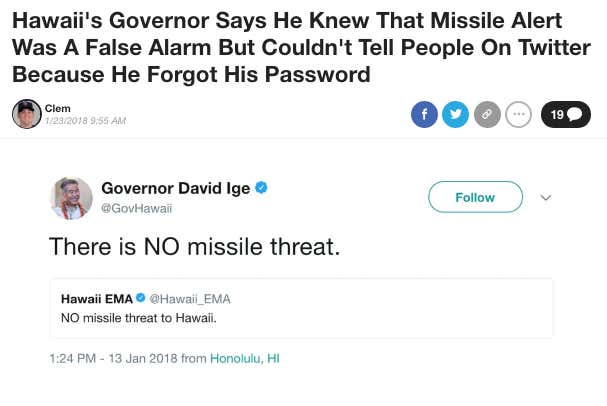