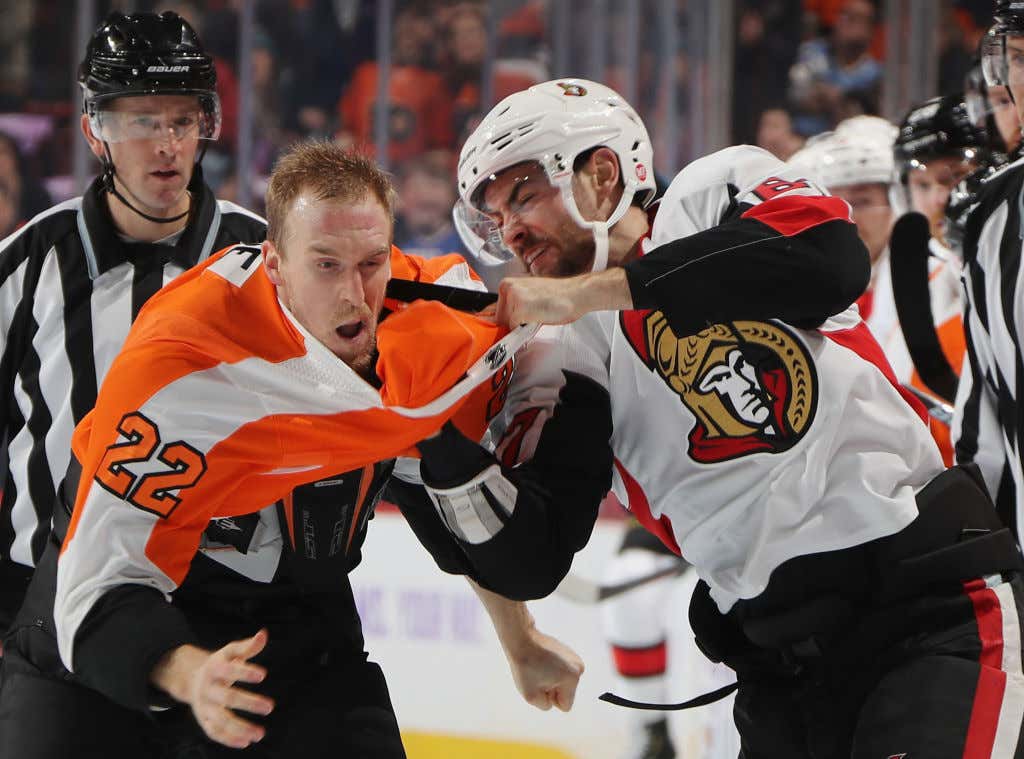 I feel bad that this picture exists because I think Dale Weise played a great game last night and credit to him for chuckin’ some knucks after a clean hit. But the fact of the matter is that this is the only picture that truly describes what that 3rd period felt like so we have to go with it. So yeah. Dale, if you’re seeing this, I am sorry.

Anybody who has watched the Flyers this season knew exactly how that game was going to play out. Obviously the Flyers were going to come out of the gates with a ton of juice in their game after their GM just got shit canned. If the biggest boss on the team gets let go, what does that say about everybody else? That at this point, almost anybody is expendable. So the Flyers had to come out and make a statement. They had to come out flying around and proving to the owner/city/themselves that they received the message that the firing of Ron Hextall was intended to send. And for much of that game last night, you could tell there was a difference. The biggest difference was just in the team’s energy. They were winning battles to loose pucks, they were finishing their checks, they weren’t committing any lazy turnovers while trying to break out of the defensive zone.

One guy in particular who really looked to be more dialed in was Ivan Provorov. He has been looking…well…not great a quarter of the way through the season so far. He’s just been reckless with the puck and it looks like he doesn’t have much confidence in his game at all. But last night he made this great breakout play that led to Giroux doing Giroux things and eventually with TK getting the first goal of the night.

I don’t know if he intended on springing Giroux for this break or not but it was still the right play to make. Just get the puck out of the zone and don’t try anything fancy. I feel like for most of this season so far, Provorov would have tried to either backhand that pass up the boards to Konency who was getting pinched on, or try to go up the middle to Couturier with a forechecker in the way. Inevitably that pass would get broken up and the Senators would go on to score after the turnover. But instead, Provorov just gets it out of the zone, Giroux makes a filthy play and Konency gets the boys on the board. Similar thing here with this Voracek goal later in the night.

Nothing fancy but it was a smart and decisive play that ended up with the puck in the back of the net. Things were going well for the Flyers. They were playing hard, they weren’t making a ton of mistakes, they were dictating the pace of the game and they had a ton of possession time in the offensive zone. It was the exact type of first two periods that you’d want to see out of a team after having their GM get fired the day before. But then the 3rd period happened and I think Jake Voracek put it perfectly after the game when he said this team just doesn’t have any confidence in themselves.

That right there should scare the everliving shit out of Flyers fans. Because as we’ve seen with other athletes in the city (see: Fultz, Markelle), confidence is a pretty tough thing to get back if you’ve lost it completely. And the reason why the Flyers have lost their confidence? Well that lies entirely on the coach and the leadership group of this team. Hakstol breeds an unconfident brand hockey. What is sickening is that the Flyers went into the locker room after the 3rd period with a 2-goal lead. They had an entire intermission to get themselves ready to go out there and hold on to that lead for the final 20 minutes. Now granted, the next 3 goals scored against the Flyers weren’t necessarily products of Ottawa taking over the game. They were a couple of fluky bounces and bad breaks. But eventually you have to wonder if so many bad breaks come against the Flyers because they’re just a bad team. And the answer to that question certainly isn’t “no”.

The Flyers could have came out in that 3rd period flying around. They don’t play again until Saturday. They could have said to themselves in the locker room that they were going to stomp on this team’s throat and not let them up until the game is over. When you have a team that is drowning, you put your foot on their head and you keep them underwater. But the Flyers don’t have the confidence to put a game away like that. Instead, they play like they’re scared to lose the lead. And then when you let a pesky team like Ottawa hang around in a game, goals like this happen.

A deflection that ends up going off the pipe, lands on Stolie’s pads, Stolarz then gets up to find the puck and it drops right in front for Tkachuk to put it away. All of a sudden, it’s only a 1-goal game. And then goals like this happen.

Pretty nice redirection by Tkachuk. A lot of traffic in front of Stolarz but it doesn’t look like he’s necessarily ready for that shot from the point. That was maybe the one goal on the night that Stolarz could catch a little heat for but with that much traffic plus a redirection, that’s just a really good goal from the Senators to tie it up. And then finally…

Matt Duchene with the biggest circus act goal I’ve ever seen. 3 unanswered goals in the final 10 minutes of the game. The Flyers went into that 3rd period with a 2-goal lead and they end up losing in regulation. I’m not saying that shit could only happen against the Flyers considering it also happened to the Minnesota Wild last night against Arizona. But the way in which it happened? Also the fact that it was the first game after the GM gets fired? That’s how you know the Flyers are cursed.

Listen. It wasn’t all bad last night. People who didn’t watch the game or people who don’t watch the Flyers will point and laugh. They’ll say shit like “Same old Flyers” or “LOL the Flyers still can’t find a goalie”. Those people are idiots. There were 4 goals scored by Ottawa last night. Here’s the breakdown.

Stolarz did exactly what he had to do last night in order to give the Flyers a chance of winning that game. I think that was probably my biggest takeaway of the night. Stolarz has the stuff to be an NHL-caliber goaltender. I’d be perfectly fine with riding a tandem of Hart and Stolarz in the future. He made a few big saves throughout the night that bailed the defense out after making some bad turnovers, and he always seems to be in a position to at least have a chance at making a save.

Unfortunately the bar for Flyers goaltending has been set so low. So the fact that he’s always squared to the shooter is a rarity to Flyers fans. But his positioning is strong and he seems to have control over his body, which is something I can’t say for all the other goalies in the organization. Like when Stolarz pushing off from the left pipe to the right pipe, he doesn’t end up all the way in the goddamn right faceoff circle and completely out of position. And he swallows up rebounds. I actually loved 95% of what I saw from Anthony Stolarz last night. So aside from the loss and the fact that I bet Flyers -1.5 thinking they’d come out and make a statement after Hextall got fired, I’m coming out of this game relatively positive.

Also I thought Shayne Gostisbehere showed some flashes of being back to the player he’s supposed to be last night. Like this breakout right here. This is the shit we need to see out of Ghost all the time.

Comes out of the zone with speed. Then he goes with the mohawk once he hits the blueline. What that does is it confuses those two Ottawa players in the neutral zone on which way Ghost is going with this puck. So they both end up just crashing down and him and he has so much speed that he can easily get split that double. Unfortunately he loses his handle on the puck entering the offensive zone but if he was able to enter that zone cleanly? The Flyers probably could have ended up getting a decent chance out of that. And that’s what having a player with breakout ability like Shayne Gostisbehere can do for this team.

So all in all–The Flyers looked good and energetic through the first 2 periods. They don’t have any confidence at all as a team because the coach does absolutely nothing to instill that confidence into them, so they ultimately end up blowing the lead in the 3rd. But Provorov looked good. Gostisbehere looked good. Stolarz looked good. This team is one head coach firing away from being able to turn it around here.

P.S. – Not exactly confident going into Saturday but maybe this team can surprise us in a good way for once.