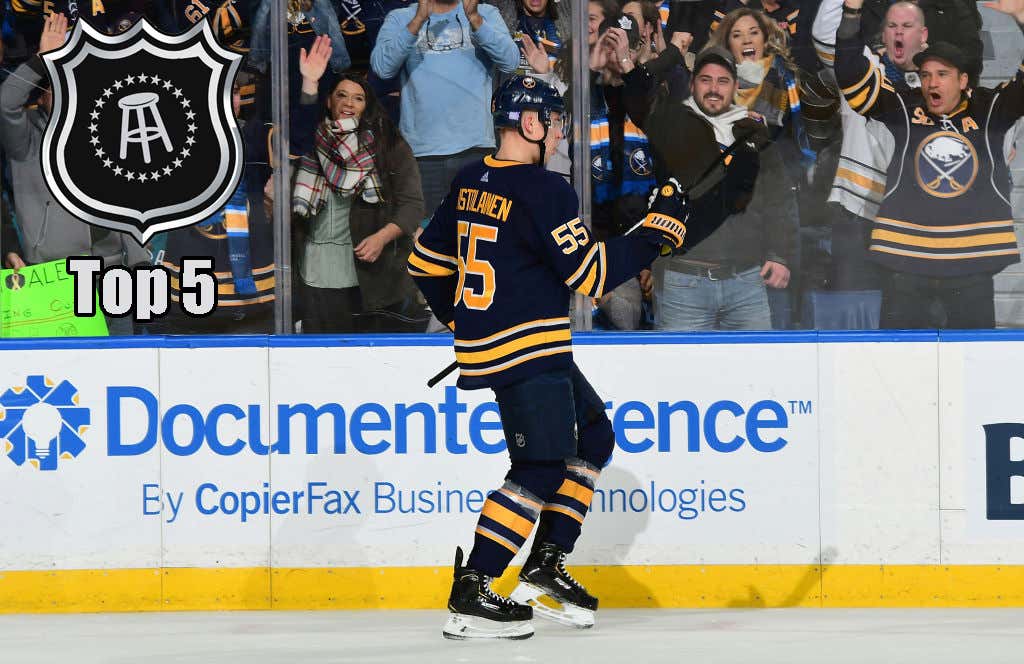 Now I don’t want Buffalo fans to get their hopes up. As a Flyers fan myself, I know all too well how a team can go on a 10-game winning streak and still fail to make the playoffs that year. But Buffalo deserves this. They deserve to believe in something. They deserve to believe in this Sabres’ team, even if it means they probably have to break the bank if they want to re-sign Jeff Skinner in the offseason.

5. Brayden Point Gets His 18th Of The Year Off The Set Piece

This is how you know the Tampa Bay Lightning are just on a different level when it comes to puck movement. Ryan McDonagh starts this play off by just lightly tossing this puck off the end boards. He doesn’t want to put too much on it because he knows he needs the perfect touch in order for that puck to settle for Kucherov behind the net.

Kucherov knows that puck is going to settle for him and he anticipates being able to make a play from behind the net. Brayden Point watches this whole thing develop, is able to catch the Ducks with their heads turned around, gets himself to the front of the net with his stick on the ice and is there for the put away. That is next level shit right there out of a nasty, nasty team. That’s also how you end up scoring 18 goals in the National Hockey League before December. Great awareness by Point, great awareness from Kucherov, great start to the play by McDonagh.

Jonathan Toews. Patrick Kane. Brandon Saad. Duncan Keith. Watch all of those guys on this play. Kane is just wandering around aimlessly in the defensive zone. Toews is trying to direct traffic but isn’t doing much of anything. Saad stops his feet and tries to just reach out with his stick here. Duncan Keith has a great seat to watch the show. And then Corey Crawford is the one who inevitably gets dunked on here by Cody goddamn Eakin with the slick mitts. That right there is the heart and soul of the Chicago Blackhawks. Those are their guys. And Cody Eakin just took them all on a stroll through town. Handles the pass on his backhand, pulls it to his forehand to walk past Saad, brings it back to his backhand and then it’s in the back of the net. What a beaut.

3. Jeffrey Skinner With The OT Game Winner To Make In 10 In A Row For Buffalo

Now the goal was nice. There’s no denying that. And obviously the goal was huge considering it kept the Sabres’ win streak rolling. But the thing I want to really talk about here is this initial zone entry and how it sets everything up. Watch Jeff Skinner here as he’s coming through the neutral zone. He knows he needs to slow up to stay onside, but he doesn’t just slow himself up. He sets a little bit of a pick on Joe Thornton and then as soon as he can, he slingshots himself off of Thornton and puts himself out front for a great scoring chance.

Again, that is Joe Thornton. He’s about as savvy of a vet as they come, and Jeff Skinner just worked him on that one. And even though Skinner wasn’t able to control that pass and get a shot on net, it still put the Sharks on their heels in their own zone which eventually led to Skinner scoring the OT dagger.

I’m 380 miles away in Philly but I could still feel the emotion from that celly. Buffalo is buzzin’, they’re fun to watch, they never say die. And they also provide us with some clips like this next one right here.

2. I Like To Call Him Rasmus PISTOLainen Because This Was A Murder

Now the only reason why this wasn’t the #1 goal of the night is because we see that same exact move roughly 15-20 times per NHL season. About 8 of those times all come from Alexander Ovechkin so I’m not saying it’s not a dirty move. But it’s not like we’ve ever seen a guy go between his legs along the boards as he turns the corner on his defenseman and makes a power move toward the front of the net. It’s pretty standard in the NHL these days. But the fact that it was Rasmus Ristolainen putting Brent Burns on a poster? And that celly to go on top of it all? What a time for Buffalo.

1. Matt Duchene Should Join The Circus

I’ve already written a blog about this goal that you can read right here. And I’ll also be talking about it some more when I write my Flyers recap a little later this morning. But give me a break. This Matt Duchene goal only goes in against one franchise in the National Hockey League, and that’s the Philadelphia Flyers. Luckily for Matt, he picked the right night to test this circus shit out.

Off the defenseman, batting the puck out of mid-air on the backhand and tucked away nice and neatly under the crossbar? Get real. That’s just not real life. The laws of physics clearly do not apply to this Matt Duchene goal. It’s sickening.