A couple days ago, Large wrote a blog calling for Liz Gonzales’ head. I don’t have any Chihuahua in that fight. I went to Mexico once and found it extremely affordable, just like every other vacation I took with my family growing up. Sure, I find it somewhat off-putting that Liz randomly supports the most successful sports franchises in the country as though she spun some globe that only delineated cities with championship teams and landed her finger on Green Bay and the Bronx. But this doesn’t really bother me because when it comes to sports, I’m more of a participant than a fan. However, I remember that her 27 rings rant upset Frankie a great deal, and that upsets me because he doesn’t take the pipe when he’s pissed. So I guess I hate Liz after all. Wow. You learn something new every day.

However, the real target of my vitriol here is Mike McCarthy, aka “Large.” He started the trend of calling for heads at Barstool, and I would ask the executioner to keep the guillotine warm. For I would make the case that his bulbous, Chernobyl-infused head should be the next to roll. Let me explain why…

About a year ago, Julie Stewart-Binks was brought on to lead the morning Sirius XM show that became Barstool Breakfast. A number of interesting people auditioned for the roles of her cohosts. But once Willie Colon and I took the mics together, it was over. Witnesses of that 15-minute test segment still recall the unprecedented chemistry that fizzled between us. In the same way that John Krasinski and Jenna Fischer famously named the other as his/her favorite “Pam” and “Jim” following their Office auditions, Willie and I both said that we wanted the other to be our cohost (true story). Soon, we were taking our seats every morning from 7-9AM, forging a bond rarely seen between a privileged white kid from Maine and an enormous black linemen from the Bronx. 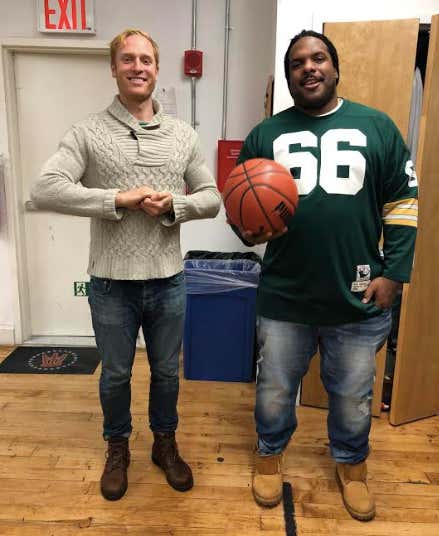 That’s how it was for six months. Through thick and thin, Willie and I grew closer and closer. Inevitably, our friendship spilled over into our lives outside the radio room as we discovered how much we both loved popping bottles with D’Brickashaw Ferguson: 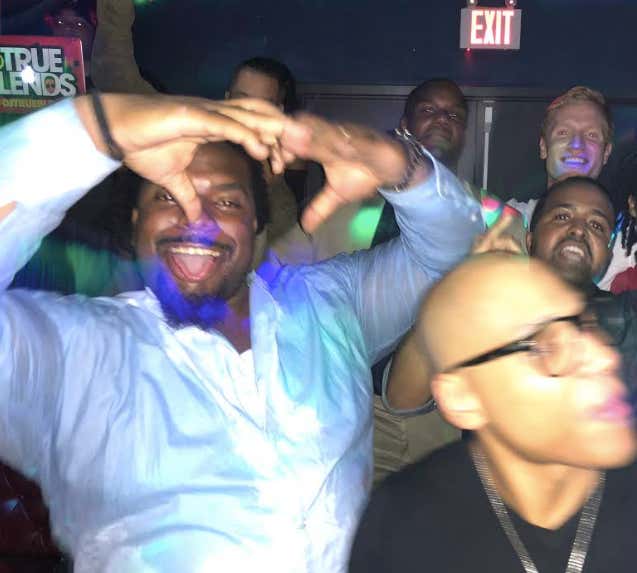 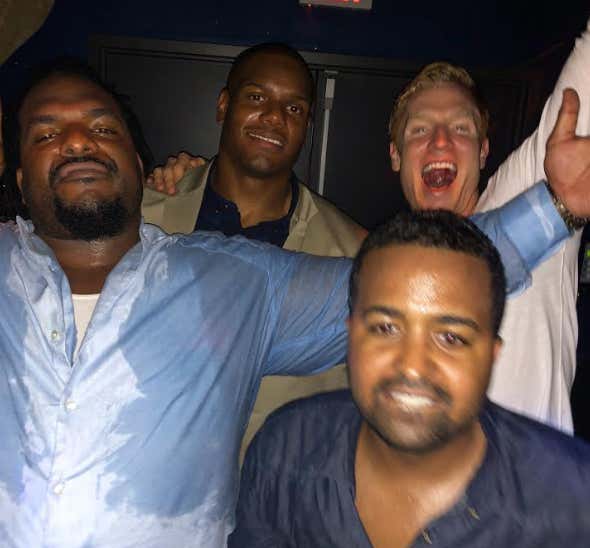 When JSB left, Willie and I really hit our stride. Our show became the #1 show on the channel, according to a consensus of two or three random comments on Reddit. It felt like a honeymoon, until Willie went on his actual honeymoon, reminding me that he had a wife. During those days, we would often have breakfast together after the show, where we would discuss things that we didn’t want to share to our growing audience. He always ordered the oatmeal with a side of sausage and a pot of tea because he was trying to lose weight, even though I prefer it when he’s bigger because I feel safer. Meanwhile, I had the steak and eggs because lord knows I can afford it. We would take turns paying the bill. Willie is a guy who is used to paying the bill for everyone, and it made me feel good to know that I was his only friend who would shoulder the load with him. Those were the best days of my life.

Who did I turn to? The newly-hired Large. Willie was away for a few days, so I asked Large to cohost with me in his absence. He was terrific—fearless, engaging, calm, hysterical. He had stories for days. He’d lived through 9/11. He was happily married. He had money. He was bigger than me.

I should have seen it coming, but I was so tired that I wasn’t thinking straight. When Willie came back, I introduced him to Large. Did you read that? I introduced WILLIE to LARGE. I told Willie to try a couple shows with Large in the hopes that he might spell me now and then. At first, Willie was doubtful. “We have such a good thing going, man” he said. I promised him that it would just be a day here, a day there, so that I could get some sleep. I had no idea that I was handing the keys to the kingdom to a usurper.

Like Brett Favre teaching Aaron Rodgers the tricks of the trade (h/t Liz!), I continued to let Large have his reps. It seemed like a win-win. Every other day, he was getting his radio feet under him, connecting with our audience, while I was sleeping until 8AM. Willie and I were still tight, though our breakfasts seemed to be happening less frequently. I chalked it up to the start of football season. I knew Willie had other commitments. What I didn’t know was that he and Large were now having breakfasts together, talking about life before 1989, sharing stories about married life, swapping recipes for extremely fattening foods, making lists of restaurants to try together. Hell, they even lived near each other in New Jersey! In short, Large was able to cover topics about which I had no knowledge. He was filling Willie’s holes in a way that I couldn’t.

For a while, they hid it from me. But as the weeks ticked by, they grew bolder and started to flaunt their bromance in my stupid, red face. I now understood how JSB had felt when I went out for a fateful trivia night with Keith and Feits, flaunting my new membership of Barstool Club Cool on social media. At the time, I had told her that we were coworkers, that friendship was not a foregone consequence of working together. But now, I was the guy on the outside of the glass, looking through the window on a party that I had built but was not invited to. I wanted to light the entire house on fire and watch them burn inside. 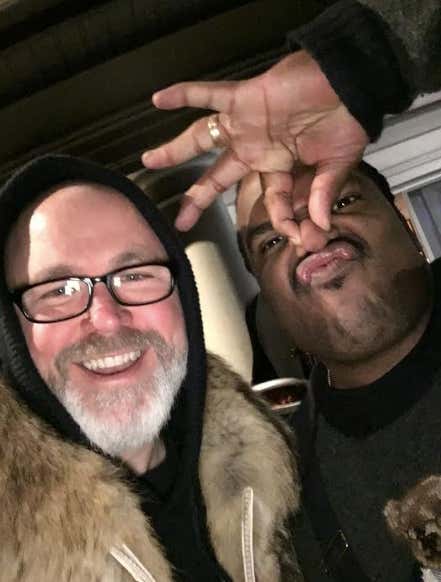 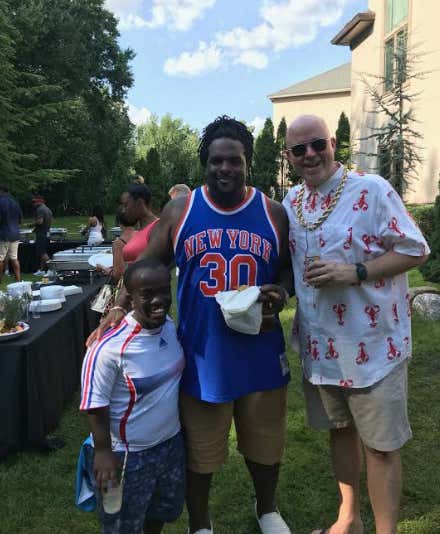 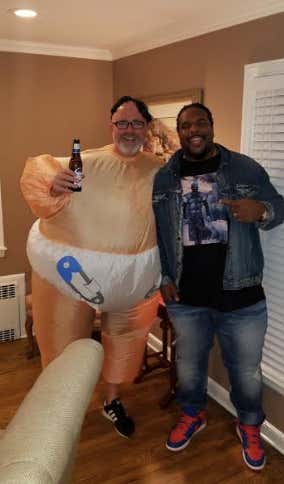 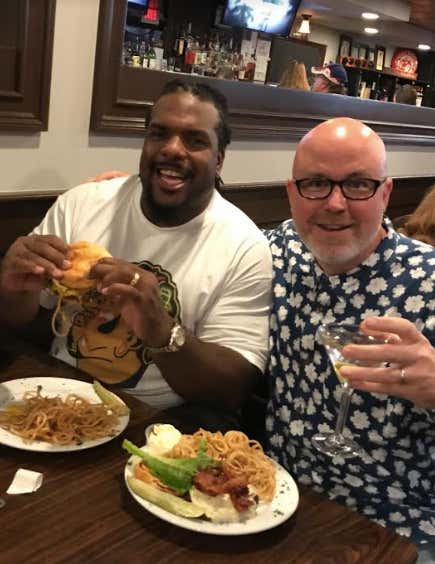 Picture after picture, post after post, Large and Willie stitched together the tapestry of my nightmares. To make matters worse, on the days when I was on radio with Willie, we would talk about the crazy antics that he and Large had committed over the weekend. Imagine getting a play-by-play rundown from your wife about the dude she banged while you were away?

“So then he lit some candles.”

“Then he pulled my pants down.”

“Then he spanked me and his hands are bigger than yours.”

I tried to come up with ways to get back in the mix. I invited them to my golf club for dinner, but they couldn’t make it. I bought a house in New Jersey so we could commute together, but their carpool was full. I tried to gain weight, but my metabolism was too fast. Nothing worked.

I couldn’t be mad because in my heart, I knew this was all my doing. I had been the architect of my own marginalization. And in the ultimate twist of irony, I was now losing sleep from an arrangement I had made to help me get more sleep!

The final turn of the knife came when Willie and Large showed up to one of my standup shows together. They sat right in the front, their two massive heads blocking everyone behind them from seeing the show, unmissable. I barely made it through my set as they pretended to laugh at my jokes, mocking me to my face. The entire crowd was howling as I ran off stage, tears stinging my eyes. But all I heard was Willie’s deep guffaw harmonized perfectly by Large’s pathetic high-pitched tittering. They were having the time of their lives while the time of my life… was up.

Nowadays when I walk in to the radio room for my days with Willie, he doesn’t even look up. He gives me a cursory “whattup doe,” but I can tell he doesn’t care. The magic is gone. One look at my red hair reminds Willie that it’s an off-day, a day where he has to suck it up until tomorrow, when life returns to full-throttle with Large. I can see it in the deadness of his eyes; I can hear it the flatness of his voice. It’s only a matter of time until I’m taken off the show completely.

But someday soon, Large will let his guard down. When he’s not looking, I’m going to stuff his bag with KKK hoods and anti-Lupus research signs. I’m not afraid to play dirty when the stakes are this high. Trust me, I hate to do it. After all, I was the one who brought Large and Willie together. But I’ve run out of options. My back is against the wall. And I miss my black friend. 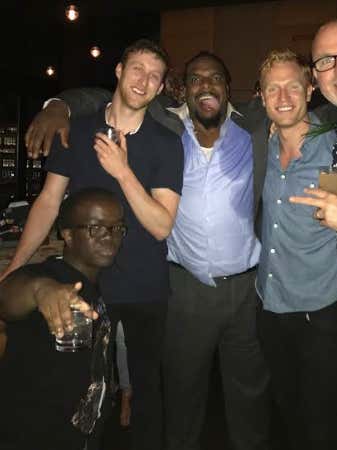