I swear everytime I look up Evan Barratt is doing something spectacular. It started last year when he completely emasculated Ryan Lindgren in every possible way inside of basically one shift.

Followed by going bar-down to put the game on ice.

Kid just won’t quit. The following weekend he had a HUGE series vs Michigan where he had the hat-trick shown above on Saturday and then night before he had a goal and an assist. The Blackhawks 3rd round pick was originally thought to be a bottom 6 energy type wing-center. He might end up being that, but right now he’s looking like he going to be much MUCH more. Tied for 1st in the Nation in scoring in his sophomore year. 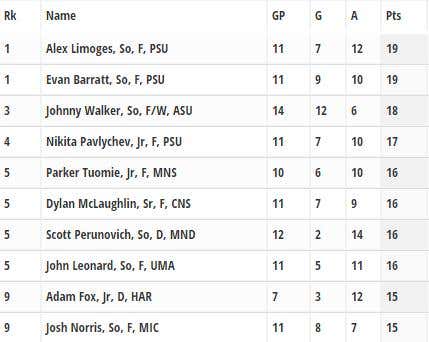 Barratt has to be a lock to make the USA WJC this Christmas with a start to the season like this. We’ll see how he looks against the World’s best of his peer group. Something tells me he’s going to be an impact guy and that Canada will absolutely hate his guts, which I love.

That 2017 Draft class is shaping up to be a SLAM dunk.

2nd round(57th overall): Ian Mitchell. Mitchell is Denver’s best dman and one of the best defensemen in all of college hockey. He will likely be an important guy for Canada at the World Juniors too and will probably sign with the Blackhawks as soon as his season is over.

Great work by Mark Kelley, Blackhawks VP of Amateur Scouting and the guy who runs the draft for the Hawks. He’s been a tremendous asset for the Blackhawks and I love him even though he unfollowed me on twitter after I started the #FireStan campaign.