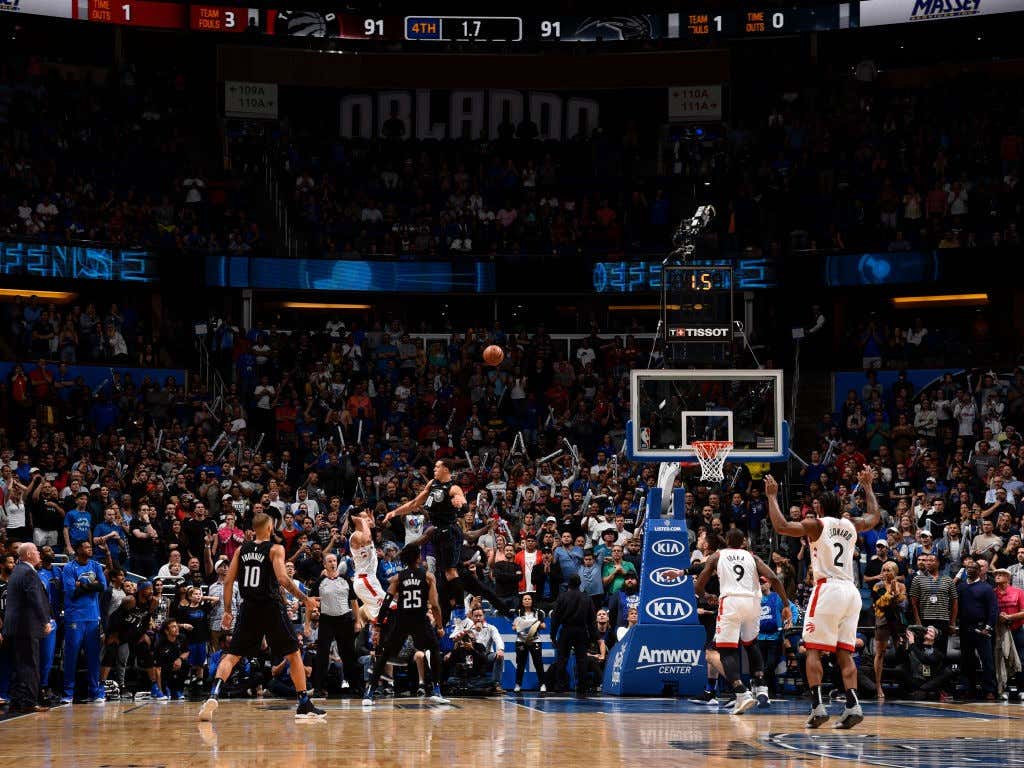 Good morning everybody and welcome to another edition of Last Night In The NBA where we bring you up to speed on everything that went down from the night before in the Association. Now since it’s Thanksgiving break and maybe you were traveling home, there’s a chance you weren’t able to catch any of the four games that were on the schedule last night. I’ll tell ya, you missed some quality basketball as all four games were pretty close that were decided in the final minutes. This was one of those rare nights that no matter what game you watched, you got a great show. Now I also know that now that you may be home, you might not be ready to deal with your family yet this morning, so take some time, watch some basketball videos and see what you missed. Here’s what happened

Right off the bat we had a battle down in Orlando. The Raptors have been in a little bit of a funk as of late, but when they came out and built an 18 point lead against the Magic, it looked like things were getting back on track. But just like ORL has been all year, they played this Raptors team tough and all the sudden we had a dogfight entering the fourth quarter.

After giving up a midrange shot to Ibaka to go down two late, the Magic ran a great ATO to get Fournier to the rim, they simply just left too much time on the clock after he tied it all at 91. They gave the Raptors one last chance at life. This is what happened

Burtal. A tough loss for sure for the Magic, and a bit of a prayer by the Raptors to save what would have been their fourth loss in five games.

For TOR, instead they come out victorious, Kawhi with another solid night, and it’s onto the next

Speaking of blown leads, may I introduce you to this disaster of a night for the Clippers. Everyone knows the Wizards are a complete mess, and given how they started this game, getting down nearly 20 points after the first quarter, I think we all assumed the Clippers were going to walk to another win, and the Wizards dysfunction was going to continue. Thats usually how these things play out

But then Lou Williams got tossed

and out of nowhere the Wizards started to chip away, and you’ll never guess what happened.

For WSH, it was an epic comeback win. After a slow first quarter they had three straight 30+ point quarters and were able to storm all the way back from a 24 point deficit to secure the win. While this doesn’t fix their issues, it does give them a temporary moment of joy where they can head into the holiday feeling good. As you can expect Beal/Wall were great

The whole thing was very weird for the Wizards. They had great bench play combined with a 39 point fourth quarter. When does that ever happen? Good for them.

You know who has been playing really well as of late? D’Angelo Russell. For a guy looking for a contract, that’s a great sign. While this wasn’t exactly a game with incredible offense, if you like defense then this was your ideal matchup because there wasn’t much offense to be played by either team.

He didn’t shoot the ball all that well but Russell led the way with 20/9/6/4 and despite the low score this was another game that was a dogfight into the fourth quarter before he Nets used a 30-15 quarter to close things out. They Nets needed this win as it’s only their second win in their last 6 games, and even without LeVert they are still feisty, which is honestly the best way I can describe them. You can’t take a night off against them because they play hard.

For MIA, are we sure the Heat are good? Now 6-11 on the year and 3-7 at home, I don’t know if we can definitely say that right now. They may one day be good at some point of the season, but they aren’t right now. They’ve now lost 6 of their last 7 games, and 9 of their last 12. That’s not great! But hey, at least Hassan Whiteside is engaged and trying, and when he does that he is sort of a monster

Our final game was another close out down in MSG. The Blazers were looking to keep the momentum going on this East Coast trip right before they play MIL, and the Knicks were just trying to make sure they continued to increase their chances at Zion. One would think NYK would just mail it in, but that was not the case at all

As a Knicks fan this would have bothered me, like why are you trying so hard. I mean this was close until the final seconds, which is way more stressful than any Knicks fan had to be anticipating. I guess at the end of the day it was a perfect tank, they gave you an enjoyable game yet didn’t blow their lottery odds. Kudos to them.

For POR, it sure is nice to have Damian Lillard isn’t it?

Can you imagine there are people out there that wanted to break these two up? Well now look at POR. Sitting atop of the brutal Western Conference playing some great basketball. Hell, even Meyers Leonard showed life in this game!

They were able to keep things close until late in the fourth, and then just like we’ve seen so many times Dame took over and had the dagger bucket. Here’s another look

The man never gets nervous in the big spots, and that’s just a fact. One of the better clutch bucket getters in the entire league. Considering their next three are MIL/GS/LAC, this was a big win to get even if it was just against the lowly Knicks.

And that’s it! You’re now all caught up on everything that went down from last night in the NBA. We’re back tonight with a full goddamn slate of 13 games, and maybe if you’re lucky I’ll have this blog for tomorrow so you can have something to ignore all the family bullshit we all have to endure tomorrow. You’ll have to check back in the morning to find out!