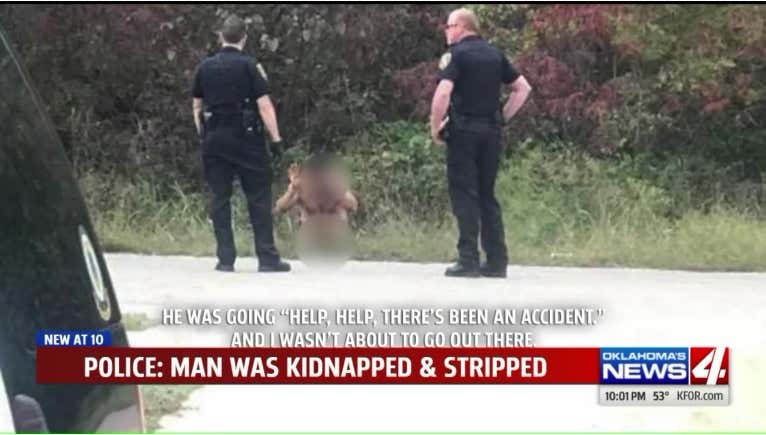 Source – A man found running through the street naked in Norman claims he was one of two people kidnapped in Moore and dropped off there. … [P]olice say a lot of bad decisions on both sides led up to the bizarre scene.

William Trites and Phillip Tullis are both charged with two counts of kidnapping, and one count of robbery. A warrant has been issued for their arrest.

According to police, it started when the victim went to a strip club at 3 a.m. An hour later, he met up with a dancer he met there at 24-hour restaurant, Mama Lou’s. It was there that the two med Trites and Tullis, who had a jeep the male victim liked.

“Struck up a conversation that led them into Moore where that person said that he had some jeep tops that he had for sale,” Moore Police Sgt. Jeremy Lewis said. …

Once inside, the victims told police the suspects laid out lines of cocaine, and when the victims refused it, they were ordered to snort it.

Then the two men allegedly demanded money from the male victim, before driving him to a remote street, ordering to strip off his clothes, and dropping him off naked.

That’s when neighbors spotted him and called the police. …

When police went to talk to the dancer, her story corroborated the other victim’s.

“As crazy as it sounded at first, it actually did happen pretty closely to the way they said. … There were a few crimes committed,” Sgt. Lewis said, “but a lot of horrible decisions led up to him eventually being found naked in Norman.”

Sgt. Jeremy Lewis has a talent for police work, but an even greater flair for understatement. Hell yeah, I’d say that any time you find yourself naked along the side of a remote street in Norman, Oklahoma, a series of horrible decisions have been made.

It’s hard to pin down the exact moment the first bad decision was made. That one, small error that set off the Butterfly Effect chain of events that led to the male victim to be calling out for help in an Oklahoma neighborhood with his nuts in his cupped hands. But if I had to narrow it down, I think I’d go with these seven words “went to a strip club at 3 a.m.”

Yup. There’s yer problem, sir. Basically if you have a free evening/early morning and had the power to brainstorm all the possible permutations of the decision to hit that tittay bar at 3 in the morning Dr. Strange-style, out of all the potential outcomes, I’d say nakedly scaring people in the middle of the night would probably be the best case scenario.

Second, as a general rule you do not want to hang out at a 24-hour diner with one of the strippers. That arrangement works out well in approximately zero percent of all the times it’s tried. No matter how good the all-night breakfast is at Mama Lou’s, your best play is to just go home, get into bed, and jack it to the satisfying aroma of discount perfume, beer, Marlboro Lights and despair still in your clothes.

Lastly, the hours just before dawn are never the best time to go Jeep top shopping at the U-Store-It of two strangers. Every Jeep owner knows that. No matter how bad you want that cherry hardtop for your sweet 4X4, that’s a choice too important not to let it wait until the daylight hours. And even then, it’s best to go to a reputable dealer. And should things go awry, by all means help yourself to the cocaine that’s been offered you. At that point, you might as well. Because your day isn’t going to get any worse. Word to the wise.

P.S. How did the stripper escape prosecution on this one? Not to let it destroy your faith in the integrity of Norman’s Pole-Worker population, but ever there was an inside job, this is it. When the perps make the guy take his clothes off but not the professional naked dancer? That’s a dead giveaway in my book.