There are so many reasons to think Aquaman as the lead in a tentpole superhero movie has almost no shot at working. Starting with the obvious ridiculousness of the character. Aquaman’s lameness is the “airplane food” of the superhero genre. Something that’s been lampooned everywhere from Seinfeld’s standup to Entourage to Spongebob:

Now factor in the horrific record of the DC Cinematic Universe so far. A multi-million dollar operation that has managed to take their most important properties – not to mention some of the most iconic fictional characters in pop culture, and reduce them to stilted, monosyllabic robots with all the charisma of the guy running the Zoning Board meetings on your local cable access. Or, in the case of Suicide Squad, ridiculous cartoon characters.

Now try to take on the challenge simply make the world-building work. It has to work underwater without looking like this: 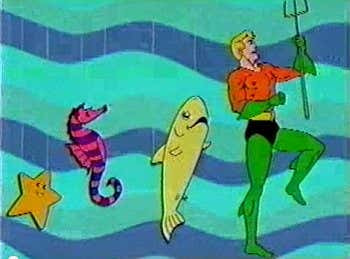 And yet … based on this … Aquaman looks pretty badass. More than that, it looks fun, which is a novel concept in the DCCU so far. And a tall order for the director James Wan, whose background is in the Saw franchise and The Conjuring films. Which, while well made, aren’t exactly Judd Apatow comedies. But it’s like Wan has taken the best elements of their by-far best movie Wonder Woman, and tried to capture what made put that one among the best superhero movies by any studio. No more of that Zach Snyder color pallette of dark gray, darker gray and fire. It seems to be folding in a lot of the kinds of scenes that have made so many good action movies great.

You’ve got your holograms sending the title character off on his hero’s journey:

The obligatory underwater city that bears an unfortunate resemblance to Star Wars Episode I, but let’s let cut it some slack because it’s necessary here:

It’s not Aquaman if they’re not riding sea creatures into battle. Well, do they? Hell, yeah they do. Even if it looks a somewhat Little Mermaid-y :

Here’s our standard villain in an exoskeleton spacesuit:

There’s Amber in a prolonged rooftop chase that could be out of Winter Soldier or literally any Tom Cruise vehicle:

And finally, and most importantly, they’re not shying away from the inherent goofiness of the scaly orange and green costume:

In a hundred million years I didn’t think they’d try it, and yet here it is. With Jason Momoa wearing the shit out of it.

You always take a chance relying too much on the trailer. But so far this one has done its job of getting this nerdboy interested in seeing this at the theater instead of waiting for it on streaming. Given how long the odds are DC is capable of pulling off an Aquaman movie, that alone is an accomplishment. Opening weekend for me, for sure.