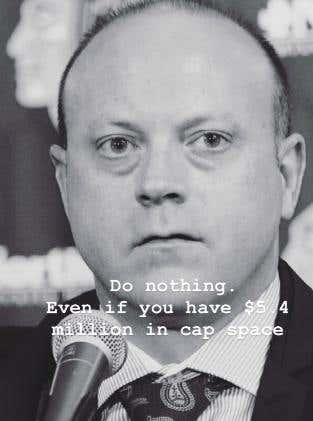 For the first time since Stan fired the greatest coach in franchise history with $12M left on his contract, Bowman did a long form interview. He sat down with Deb Placey, who I rather enjoy, and it was the exact type of interview you would expect. A quick segment right in the beginning about Joel and then probably 38 minutes about Stan the person, his background, his battle with cancer, his father, family life, etc. I’ve been particularly hard on Stan Bowman in the past few years and obviously I set the heat on high when he fired Joel Quenneville. This interview humanized Stan Bowman. Which I think is necessary in these trying times. He is a man with a family. Having said that…just because he has a family doesn’t mean he shouldn’t be fired. He absolutely should. He’s been bad at his job for a while now and it seemed as though he fired Joel Quenneville the first chance he got. Here is my thing though…he talked about accountability a lot during his press conference two weeks ago, but he’s never stepped up and directly answered the hard questions.

A few days later Stan Bowman sat down with Scott Powers of The Athletic for an extended interview. The entire thing is worth a read, and I am sure Scott’s hands were somewhat tied as far as what he could ask. I closed my laptop after reading and left frustrated with both interviews because the difficult questions weren’t ask/answered/printed on the record. Again, it goes back to accountability and Stan Bowman constantly ducking, bobbing, and weaving, is going to make people angry. There were a few moments that were utterly shocking.

Now, of course Stan and John would never grant me an interview because well…they don’t like me at the moment(so I’ve been told). Here is what I would ask:

Question #2) Why do you keep addressing/pushing this Scotty Bowman narrative?

In an interview with 670am The Score a couple weeks ago John McDonough brought up Scotty Bowman on his own out of nowhere in what was easily the most angry and emotional segment of the interview. It was bizarre.

The one thing I would really like to debunk the fact that ‘Scotty Bowman runs the Blackhawks’…I really would like to see the media stop reporting that. It’s FANTASY. IT’S NOT REAL. Scotty plays a micro-fractional role here. He’s a consultant. This is one of those perpetuating things because Stan is Scotty’s son. Stan is his own man. It’s just not true. It’s not accurate. People think that he’s running the organziation. It’s not fair to Stan either. Sometimes it can get a little tough on him because that’s the perception.”–John McDonough

Then in the interview with the Athletic, Stan talked about his father’s role in the organization too

“My dad lives in Tampa, in Sarasota. He’s an adviser. He’s hardly … He’s into the NHL. He goes to the Tampa games all the time. He watches college games online. He watches American League games. He watches junior games. He loves hockey. But as far as him like having this big … he just doesn’t. If I have questions, I’ll call him. He never calls me and offers me ‘You need to do this’ or ‘You need to do (that).’ He’s basically there when I want to bounce an idea off of him. But that’s just totally false, right? But people are going to think it, and it’s not right, but what can you do about it other than say it’s not right?”–Stan Bowman

The Scotty Bowman role was also discussed in the NHL Exec Suite interview with Deb Placey. I don’t know. It just feels forced and weird. I don’t think anyone actually believes Scotty Bowman is running the show. It’s like a false narrative or an intentional distraction at this point. Stop addressing it. It feels forced. OF COURSE Scotty Bowman is involved. You pay him to be a consultant and he is Stan’s Dad. If you have a job in hockey and your dad is one of the greatest coaches of all time and you don’t consult with him then you’re an idiot. I don’t think anyone believes that Scotty is a puppet master or the man behind the curtain. I imagine it’s similar to the end of Godfather I. Stan is the Don. Scotty is the semi-retired consiglieri. Stop addressing it. Nobody with a brain actually thinks it’s some conspiracy where Scotty is in charge.

Bowman said he targeted Kunitz and Manning because they appeared to fit Quenneville’s type of game.

“Part of your job as a manager is to try to work with your coach to try to give them players that can implement the way they want to play,” Bowman said. “So I think we did a good job of that over the years with Joel. When it was obvious players didn’t fit the way even though they were quote-unquote good players, if they weren’t going to work for us, we didn’t just sit on them. We would move them and try to find somebody.

Seriously, man, what’s your problem? Someone needs to cross examine Stan Bowman because this answer should NOT be allowed to fly. Uneccesary to throw Joel under the bus in this fashion and also very much not true.

Follow up question 1#) What makes Kunitz and Manning fit Joel’s type of game?

Because that is NOT obvious and I would go as far to say that Joel was VERY disappointed by the moves this summer, per a source who would know. Kunitz is 39 and a 4th liner at best.

Manning isn’t Joel’s type of player at all. Joel wants players who can skate, move the puck up quickly, and who can think. Manning has never been reliable consistently in his own end. He is the very definition of NOT a Joel type of player. There has to ACCOUNTABILITY if you’re going to say something like that. If you are going to blame the coach for your roster decisions after he’s been fired then you need to be asked difficult questions when you volunteer in correct statements like that. This statement by Stan is either a lie or he truly doesn’t understand what Joel’s type of player is. It’s sad to say that maybe he really doesn’t know.

Follow up question #2) David Rundblad, Jan Rutta, and Erik Gustafsson are all players who received extensions when it was very obvious that there was a) no market for them and b) they were not Joel type players…how can you say that you do a good job of moving players out who clearly don’t fit? Also the “good players” you’re referring to are Trevor Daley and Kempny. They went on to have success with other teams while they struggled here. If you were so in tune with Joel’s style and type of player, why acquire them in the first place? Especially Trevor Daley who had a substantial track record in the NHL and you knew what his strengths were?

Other questions I have

Where would this team be if you hadn’t acquired Anisimov for Saad only to save $1.5m?

Where would the team be if you hadn’t traded Phillip Danault for Dale Weise?

Where would the team be if you hadn’t traded Joel ultimate guy, Hjalmarsson for Connor Murphy?

Where would the team be if you hadn’t traded an MVP caliber talent in Artemi Panarin for Brandon Saad?

What was the last time you “won” a trade?

Stan is free to do the media circuit because he knows people won’t or can’t hold his feet to the fire. He is free to take drive-by shots at Joel Quenneville and blame him for Manning and Kunitz without being challenged. That part really bothered me. Stan, John, Adam, if you’re reading this…lets go. Let’s have a coffee and discuss what is actually going on. I will let you tell the truth to people. The truth will set you free. People are suckers for the truth and fans can forgive a lot of things if you sit there and just say “I fucked up, BUT here is how I am going to fix it”. Do that. Come talk to me.