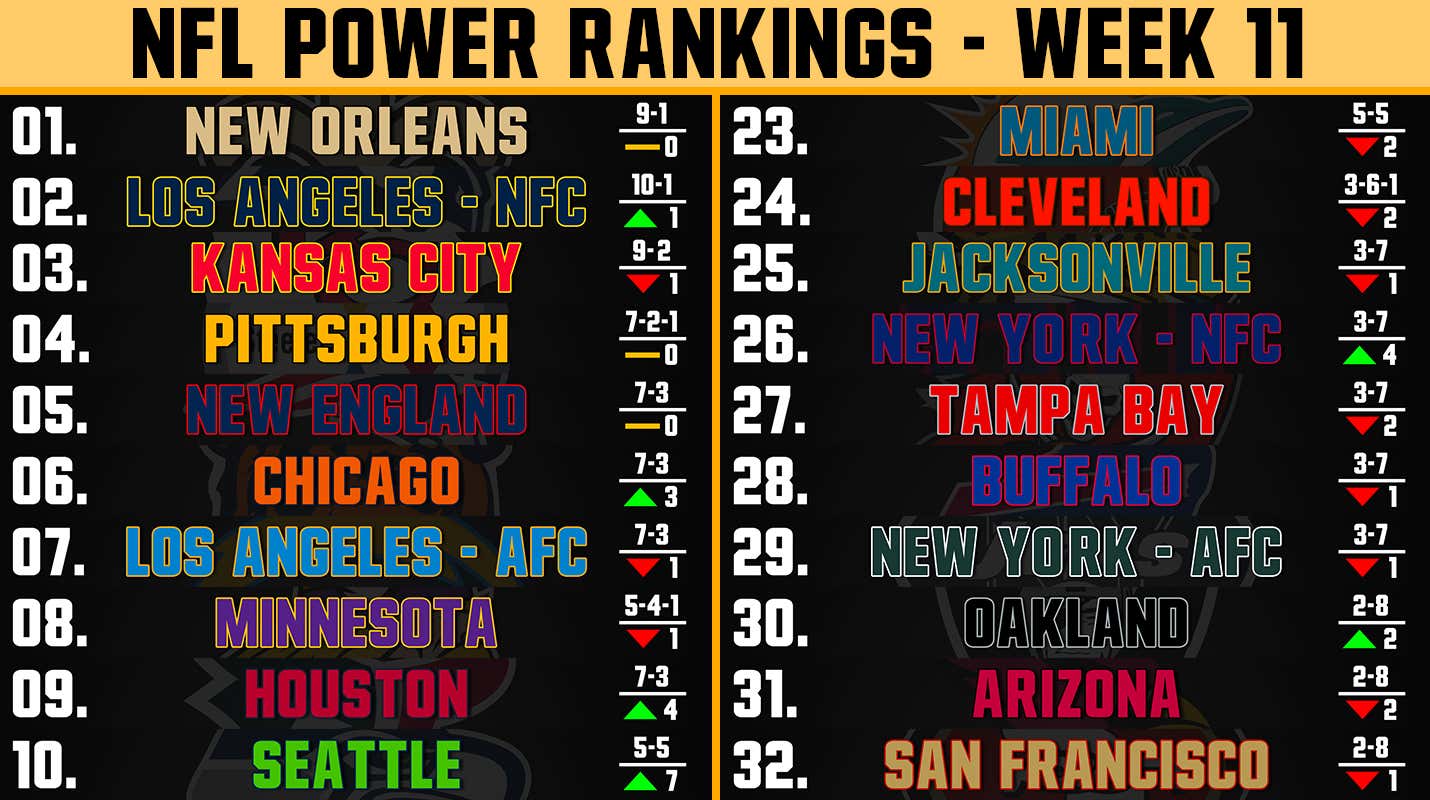 Half of my Top 10 from last week lost. That made my job difficult. Make sure, as always, to get mad at me if I disrespected your team.

A game of cat and mouse has the 49ers now in the last slot on the board, but it’s splitting hairs at this point.

Losing at home to the Raiders is not good, but their offensive line is even worse.

Gruden pulls his squad out of the last place slot, for now, after their win over bottom-feeding Arizona.

The Jets are struggling, and they don’t expect to have Sam Darnold back for their upcoming game against the Patriots.

One of the weirdest teams in the NFL, the Bills look like they’re close to getting rookie Josh Allen back for the stretch run.

It’s officially a quarterback carousel in Tampa as Jameis Winston is back under center. This Buccaneers team is a long way from their promising start.

Somehow, someway, this team is still alive in the NFC East. With that said, they put their quarterback situation in worse shape with each win.

The Jaguars dominated the Steelers… only to lose in the closing seconds. Their season is all but finished at this point.

They drop down two slots by default during their bye week, but head into a stretch of winnable games with a 3-6-1 record. Those losses in overtime to Tampa Bay and Oakland continue to sting.

Like Cleveland, the Dolphins drop by default following their bye week.

Keenan Allen says the Broncos suck, despite their win, but Denver used their home-field advantage to stay alive in the Playoff chase.

Yikes. The injuries are piling up as the Cowboys slowly gain control of the division.

Just when everyone thought this team found their groove, the Falcons drop two straight games and put themselves in must-win scenarios the rest of the way.

Losing Kerryon Johnson and Marvin Jones after their win over the Panthers is tough, but, nevertheless, the Lions keep themselves in the hunt.

I can’t figure this team. I don’t even think the Titans know exactly who they are at this point.

How about the Colts? This team is far better than their 5-5 record alludes to, especially after kicking the Titans’ ass. Those brutally close early season losses may end up not mattering much if Indianapolis keeps playing this well.

A tough loss coupled with losing Alex Smith for the season added up to be one of the worst all around results for any team this season.

Throwing the ball, Lamar Jackson was serviceable, but his ground game shows why he is lethal. I’m curious to see what the Ravens do with their quarterback situation.

The Cowboys have their biggest game so far this season as they have a chance to grab the NFC East lead with a win over the Redskins.

The Packers are a tough team to figure out. They’re back under .500 at 4-5-1 but still have plenty of hope with a relatively easy schedule the rest of the way.

Based on the teams they beat below them, the Panthers didn’t move down with their loss in Detroit. They are back home in North Carolina this weekend in a win they really need against Seattle.

In their last five games, the Seahawks are 3-2 with last-minute losses to the Chargers and Rams. This may not be the juggernaut team they once were a few years back, but the Seahawks are competitive and right in the mix for a Wild Card spot.

Who would have thought the Texans would rattle off 7-straight wins? They’re in the driver’s seat in the AFC South and the best teams left on their schedule are the Colts and Eagles. They legitimately could finish their seasons at 13-3.

There is plenty of season left for the Vikings, but they took an early blow to their NFC North title hopes with a sloppy loss to the Bears in Chicago.

The Chargers would have been a half game out of first (technically 1.5 with their loss to the Chiefs) and the Kansas City Chiefs if they had not blown that game to the Broncos. Nevertheless, this team is one of the few actual Super Bowl contenders in the AFC.

Look, I’m not saying I am the leader of the Bears’ bandwagon, but I have been on board since the first week of the season. Chicago, thanks to that damn good defense, now sits firmly in the driver’s seat of the NFC North.

There wasn’t a single point in their game against the Jaguars that I thought the Steelers would lose. Even when the offense struggles, they still find a way to win.

I can’t drop this team down more than a slot after how close that game was in Los Angeles. The only real issue you can pull from it is the fact that their defense is still a massive liability. Can they overcome it to win the Super Bowl?

What a fucking game! The defense, which was expected to be one of the best in the league, looks a tad suspect at times, but they also did their job with five forced turnovers and two touchdowns.

The best team in football just embarrassed the defending Super Bowl Champions. Anything short of a Super Bowl would be a letdown for New Orleans, at this point.