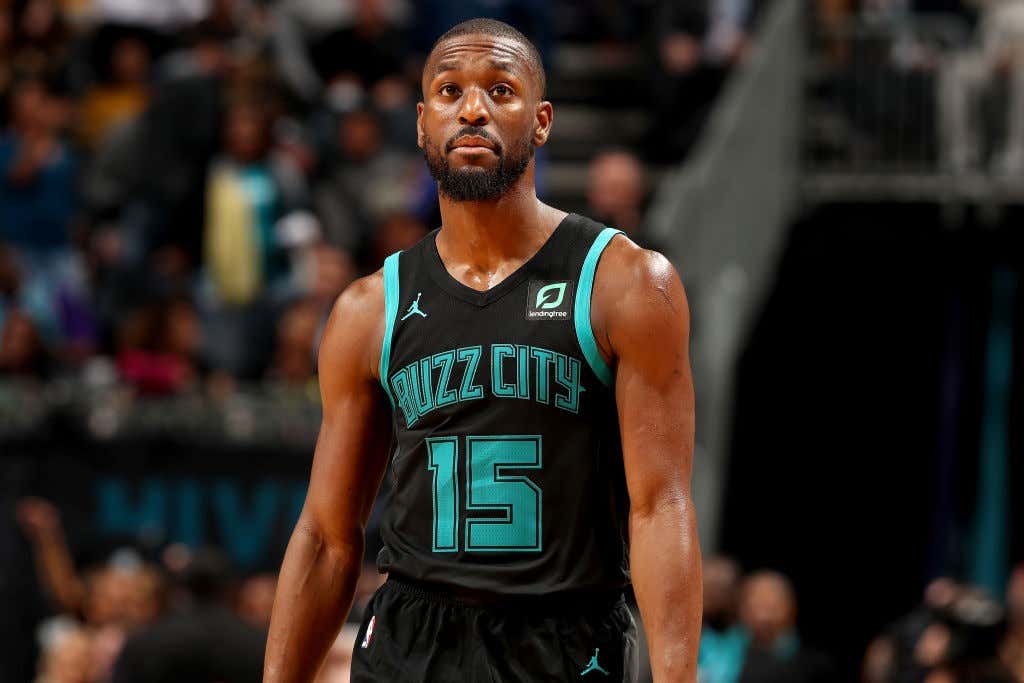 Good morning everybody and welcome back to another edition of Last Night In The NBA where we bring you up to speed on everything that happened from the night before in the Association. Hopefully your office is closed tomorrow which means you’re looking for anything to help you make today go by quicker while also avoiding any and all responsibilities. Well you’re in luck, because the NBA gave us 9 total games last night, so if you spent the night watching that awesome football game and somehow missed another great night of hoops, then keep reading. Here’s what happened

As you know, we’ll be getting to the Celtics in the usual blog, and boy do I have some thoughts about those assholes. For this blog, instead we’ll focus on the basketball magic that was Kemba Walker last night. After just dropping 60 against the Sixers, Kemba followed up that performance with another ridiculous outing

The man had 21 points in the fourth quarter, didn’t miss a shot it felt like, and for whatever reason the Celts kept going under screens which ultimately led to a dagger three. Read a scouting report for me one time would ya? His 103 points in two games is just stupid, and there is little to suggest this man isn’t going to get a big time deal this summer if he keeps this up. The best way I could describe Kemba’s night was as a Celtics fan you were scared every time he had the ball. You knew every time he touched it that he was probably going to score, and he did. What a performance as he singlehandedly carried this Hornets team.

Pretty standard win for the Pistons here who have now won 4 of their last 5, and while TOR was the only good team during that run that doesn’t mean you should give them shit for it. I’d personally love a 4 out of 5 stretch right now for my favorite team. As expected the Cavs had all sorts of defensive problems with the Pistons front line who had a combined 44 points

on 17-29 shooting. When those two are that unstoppable it really makes things tough for defenses. You want to focus in on them, and then the next thing you know you have guys like Reggie Bullock who sneak up and drop 21 on you too

Don’t let the final score fool you either, this was pretty much a blowout and it took a pretty poor Pistons fourth quarter just to make it look somewhat respectable. DET is about to have a back to back with HOU, and then teams like GS/OKC/PHI/NO are on deck so we’ll see just how much better they really are.

For CLE, I mean at this point who is surprised. Like all the other tanking teams in this league, the wins and losses don’t really matter, you just want to see progress from your young players. Well that’s what they’re getting from Collin Sexton, who had another 18 points and has been playing really well for the last week plus

After maybe a little premature panic with Sexton as he learned the NBA, he seems to have settled in nicely.

All these other teams continue to get all the hype and all the publicity in the East, and then there’s Indiana just minding their own business, winning games. Pretty tough to beat this team when they go 52/48% at home, make 12 3PM and then barely turn the ball over. I don’t want to say that’s a perfect outing, but it’s damn sure close. They’ve now also won 4 of their last 5 and the impressive part was this was all without Oladipo! That shouldn’t happen, but that’s what depth can get you sometimes in this league as the Pacers bench balled out for sure.

Sabonis continues to be such a force this year off the IND bench it makes you wonder if they should have given Myle Turner that 80M extension. From the starters it was the Bojan show who led the way with 21

And I think it’s safe to say the Pacers are the best team nobody is really talking about. That seems weird because it’s not like this is the first year they’re good, but they continue to ride under the radar. I just want their fans to know I see what’s going on and it’s pretty damn impressive.

For UTA, what a roller coaster of a team. Look great one night, struggle the next. Hard to win on the road when just two of your starters finish in double figures, even if one of those was Ricky Rubio going crazy

It didn’t help getting down 32-19 early, and from there they never really recovered.

This may have been a little closer than what Sixers fans wanted, but there should have been little doubt that they would ultimately pull this out. The talent level is simply too high. As expected they went on their second half run, and that was that. It didn’t help that they went 6-22 from deep or turned it over 19 times, but when you’re getting the type of dominance that they got from Embiid/Simmons/ etc, you can overcome that

The Embiid vs Ayton battle was fun, and I’d say Embiid won this round with his 33/17 on 12-23 shooting. The Sixers are now a perfect 9-0 at home, and I think they have done something crazy like win 25 straight regular season games in that building? If that’s not the exact number it’s pretty damn close to it. I don’t care how much you may hate them, that’s impressive as hell.

For PHX, they played well, no doubt about it. Ended the night with 50% shooting and only 13 TOs, they had balanced scoring with six players in double figures, and then Devin Booker was fairly ridiculous

Unfortunately the Suns are now 0-7 on the road, but who really expects them to win any games at this point. Bookker was awesome, Ayton was solid against Embiid as well with 18/9 on 8-11 shooting

and they are the reasons why it’s worth watching this team.

I know it was the Hawks, but can we talk about the fact that the Clippers may actually be legit good this year? I mean they dropped 127 points in regulation and didn’t even really shoot it all that well, with 43/30% splits. But what they are doing is they’re getting solid performances from almost everyone on the roster. Hell, Montrezl Harrell is a legit 6th Man candidate!

Credit to Doc Rivers for actually getting the most out of this team, and they have to be one of the early surprises in the West so far this season. They used a big fourth quarter to ultimately pull away, but make no mistake this was a dogfight the whole way through.

For AT, there are two important things here. First, John Collins is back, which is important for them

and second, Trae Young was ridiculous

This rookie class is off to an insane start, what else is there to say.

Look at Memphis go! Healthy and near the top of the West, who saw that coming when the year started? Nobody. But here they were, handling a DAL team that had won 4 straight with relative ease

What their season has told us is that when Conley/Gasol are healthy, they can be a pretty legit duo. What makes the Grizzlies so good is they force you to slow it down and play their style. They will grit and grind your ass to death, and then boom next thing you know Mike Conley has a career night from behind the arc and you look up and somehow they’ve won again. They are playing some of the best basketball in the entire West right now, and you’d think if they stay healthy that’s not going to change anytime soon.

For DAL, a tough loss for sure given how well they are playing, but Luka was still good

sure there may have been a moving screen on that big Conley three, but hey that shit happens.

It’s too bad these two teams could only meet in the Finals. This would be one hell of a playoff series if you ask me. Two high powered offenses with deep ass teams and good coaching, who wouldn’t want that. Just like he has all season we got another MVP caliber performance from Giannis

who had some help with guys like Bledsoe who was solid

and even though they didn’t get much from their bench, those two pretty much carried the load. A big second half was what ultimately allowed the Bucks to pull away, and they now move to 8-1 at home, which is pretty important. If this team wants to go deep in the playoffs, having a legit homecourt advantage is going to help.

For DEN, they were certainly competitive in the first half, and it made you think that perhaps that could steal a game against a good team in a tough place to play. Jokic led the way with 20

but ultimately their three point shooting sort of let them down. You can’t beat a MIL team going 12-41 from deep, and it also doesn’t help that Millsap only had 8 points on 3-9 shooting. The Nuggets are now 3-4 away from the Pepsi Center, and after a hot start they’ve been sort of up and down as of late. That tends to happen with a young team from time to time.

What the hell is going on in SA? Allowing this many points in regulation? They’re now 2-6 on the road this season, and that’s so hard for my brain to understand. Last year they had the same sort of issues on the road and I thought it was a fluke given their 20 year dominance. I don’t know what’s going on but Popovich has to figure that shit out quick. He doesn’t exactly play in a conference that allows you to do shit like this. It’s crazy because they shot 47/50% and played pretty well, with DeRozan leading the way with 21 points

For NO, pick a name and they played great. You had Julius Randle throwing up a triple double off the bench

You had Anthony Davis continuing his dominance

E’Twuan Moore isn’t showing any signs of slowing down

and the Pelicans are now 8-1 at home. Not bad! To think they were down 39-30 after the first quarter and then scored 110 points over the next three is pretty wild.

Westbrook was back for OKC, and yup, he looked like his same old self

And now that he was back, we saw the second banana Paul George, who is pretty legit when he isn’t asked to be the #1 option

Throw in a little Steven Adams and Hamiduo Diallo who had a combined 29, and this was a great showing from the OKC offense

However, in basketball you also have to play defense, and the Thunder didn’t really do that. Some may be shocked by this result, but you have to remember the Kings are sneaky good.

For SAC, can you imagine their coach being on the hot seat? Hey Kings, don’t go all Kings and realize he’s doing a fantastic job you morons

Look at those performances! Everyone played well against a quality opponent, and this is even despite scoring just 15 points in the third quarter. The Baby Kings are no longer a joke, and that’s certainly no reason to fire your coach.

And that’s it! You’re now all caught up with everything that happened last night in the NBA. We’re back tonight with 4 more games, but you’re probably going to be out drinking or something tonight so it’s cool if you miss it, just check back here tomorrow morning!