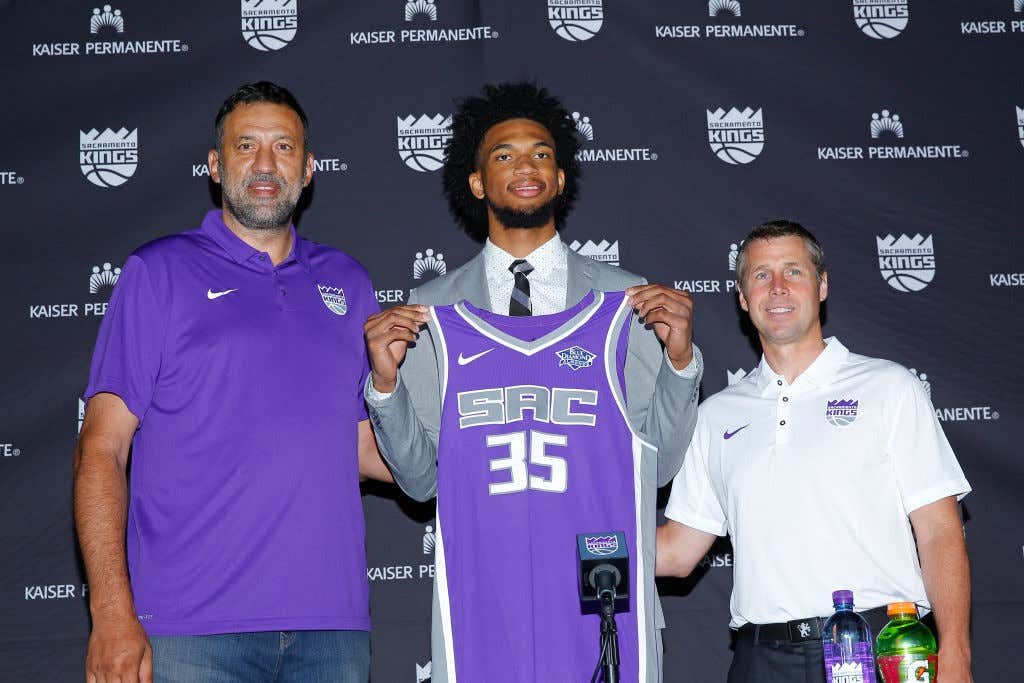 (Yahoo Sports) – There appears to be a substantial disconnect between the Sacramento Kings’ front office and head coach Dave Joerger pertaining to the franchise’s priorities and direction, sources told Yahoo Sports.

It’s win now vs. development for the future.

Sources said the franchise is growing frustrated with how Joerger is distributing minutes and assigning roles to the team’s young prospects.

The front office views this season as a development year, sources said, but it was still confident that the team would be competitive and grow with Bagley, promising guard De’Aaron Fox, and forwards Harry Giles and Skal Labissiere meaningful minutes.

Joerger, generally regarded as one of the best X’s and O’s coaches in the league, has favored playing veteran players over developing youth, especially in crunch time.

You know, I really feel for Kings fans. Finally, after years of being a laughing stock they start the 2018 season off great and appear to have their shit together. They have a bunch of young interesting talent, have a top 15 offense, and are one of the teams that should definitely be on your League Pass rotation. So naturally, after a an 8-8 start which is certainly better than most people expected, of course there has to be drama. Often considered a disaster of a franchise, it makes total sense that despite their good start there are now rumors that Dave Joerger’s job is now in jeopardy. You would think that getting the team to play well in the tough West, with wins over good teams like OKC/MEM/SA would earn him some slack, but remember who we’re dealing with here.

The coaching/front office relationship is the most important thing for a franchise obviously. It’s this delicate balance of the coach wanting to win now, and put players on the floor he can trust, versus a front office that invests high lottery picks on players they want to see play. At the same time, if a coach doesn’t win, he usually gets fired. I can’t remember a situation where a coach had a team playing well and actually, and he was still fired. That would be such a Kings move I almost need it to happen. Honestly I’m not sure what Joerger can do. Sure Bagley’s averages are nice for a rookie, but his advanced metrics are a disaster. He has a 103/112 rating for an overall -9.0 net rating which is the fourth worst on the team. Safe to say he’s struggled defending at the NBA level, and his offensive arsenal is fairly limited. Why should be play more just because he’s a high draft pick? Isn’t that why you hire a coach you trust, who is there every day and can evaluate how ready a player might be?

If the Kings front office wanted Bagley/Skal/Giles to play more, then why did they make an offer to Bjelica in the first place? No one forced Vlade to make that deal, and I highly doubt he agrees to it if Vlade told him this summer that they wanted to bring him in but barely play him. How is that Dave Joerger’s fault? Now of course this is all just speculation, but once we saw the team make this statement, in my mind things became way more real

“Dave has our full support and confidence,” GM Vlade Divac said in a statement. “We continue to work together to develop our young core and compete.”

Yeah that’s the kiss of death folks. Seen it a million times. If I’m Joerger, I’m already packing up the shit in my house and looking around the league for another landing spot. You get that type of statement and combine it with these reports of their beef, it’s a wrap.

Now of course, as a Celtics fan who happens to root for a team that owns the Kings 1st round pick as long as it’s not #1, I find this news spectacular. Any Celts fan will tell you that while the Kings may be fun to watch, they’re winning a little too much for our liking. So if Vlade wants to be stupid and fire the main reason for that success, who am I to tell him not to do that. Part of me thinks the SAC front office doesn’t realize they don’t own their pick. I feel like we can’t completely rule that out because on the surface this makes no sense.

So I’m sorry Kings fans. You don’t deserve this type of drama. You’ve had an exciting start to the year and you should be able to enjoy that. Instead, it’s probably going to end relatively soon as long as Joerger continues to do what is best for this team on the floor each night. That is so backwards it could only happen to the Kings, but such is life.