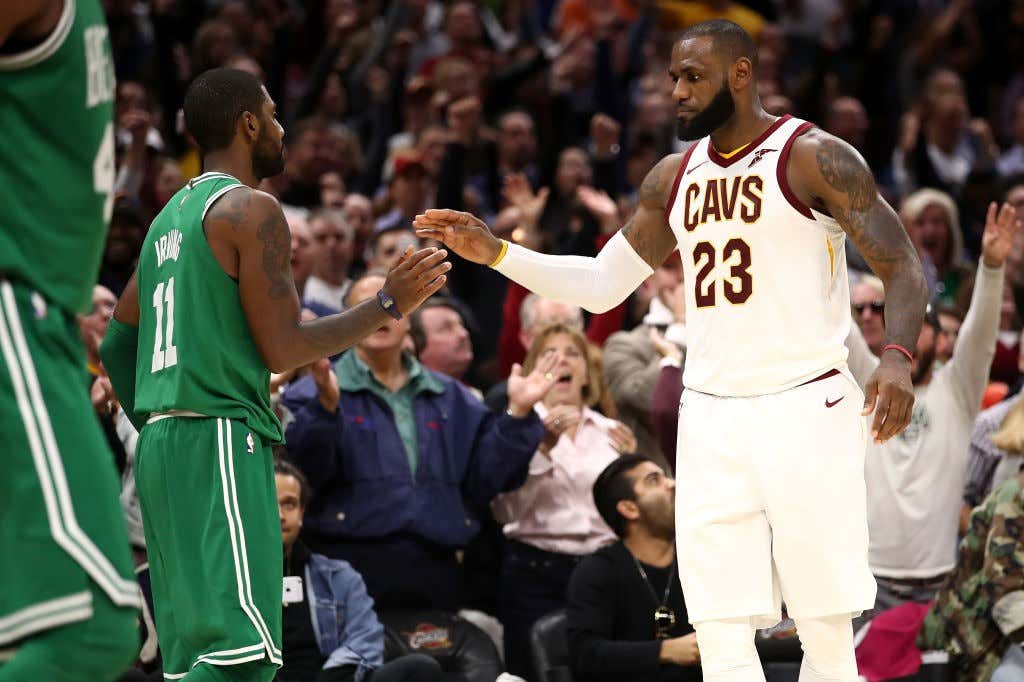 (The Athletic) – The day the Cavaliers agreed to trade Kyrie Irving to the Boston Celtics, LeBron James was signing jerseys for Upper Deck in Santa Monica, California.

When then-coach Tyronn Lue, also in California at the time, found out what was about to happen, he drove out to see James and put him on the phone with Cavs general manager Koby Altman.

James was adamant on the call — do not trade Irving, especially to the Celtics. By the end of the call, according to four separate accounts of people present for the conversation, Altman told James the trade would not occur.

James’ close friend, Randy Mims, and bodyguard Rob Brown came to him with their phones to show him the news. James, who was still signing jerseys, dropped the pen and slumped in his chair.

“Everyone knows that when Kyrie got traded it was the beginning of the end for everything. It’s not a secret,” James said in an interview with The Athletic.

James suggested he didn’t feel he was lied to by Altman, so much as Altman was overruled by owner Dan Gilbert.

Cavs front-office officials declined to be quoted for this story but disputed that Altman gave James any indication the trade would not occur. They also said Altman asked James whether he would commit to the Cavs long-term if Irving were not traded, and James said no.

On Wednesday, James will walk into Quicken Loans Arena as a member of the Los Angeles Lakers for his first game against the Cavs since leaving the organization a second time as a free agent.

“I’m returning to a place where I’ve spent 11 years of my career,” James said. “I had some great moments, had some not so great moments, but, all in all, when you give everything to whatever, the franchise, a teammate, a coaching staff, anything, that’s all that matters.”

Pretty interesting story coming out today from LeBron about the end of the Cavs run. If I’m a CLE fan right now and I read this story, I’m pretty bullshit. As we’ve seen from both Koby Altman and Dan Gilbert, they’re a little shady when it comes to this whole running a basketball thing. But at a time when your best player, someone who happens to be the best player on the planet tells you not to trade Kyrie Irving, and not only that to not trade him to the Celtics, and then you tell him OK no problem only to immediately trade Kyrie to Boston, what do you think happens? LeBron leaves, and that’s a wrap for your franchise.

He can say he didn’t feel he was lied to, but how can that be the case. You don’t think he called Gilbert too and said the same thing? If not, why wouldn’t he? This whole situation is tough because lets not act like LeBron wasn’t holding this franchise hostage either. If he wasn’t going to commit long term even if they kept Kyrie, well what did he expect them to do. They can’t turn down this Celtics offer and then lose LeBron anyway for risk that the Celts deal might never come around again. That’s where this whole thing confuses me. Part of it seems like they want to make it look like LeBron was adamant about keeping Kyrie and was bummed when he was moved, yet he wouldn’t commit, so in my mind that sort of contradicts things. As you go deeper into the story, there’s more juicy details

There is nuance with the Irving deal. When Irving demanded to be traded in July 2017, he did so in large part because he no longer wanted to play with James.

Irving, in fact, told the Cavs he wanted out so badly he’d go ahead with knee surgery and miss a large portion of the year if he wasn’t traded. James, who did little to try to bridge the divide with Irving, told the Cavs to keep Irving in spite of his threats.

Then there is Griffin, who before he parted ways with the organization knew Irving was unhappy and had already explored some ideas of his own to trade Irving — just not to the Celtics, and not for a deal in which the most valuable asset the Cavs were getting back was a draft pick for future use. Griffin’s idea was to leverage Irving’s desire for change as a way to acquire Paul George, another elite player who would have helped James try to win now. But he wasn’t going to do it without first getting a new deal from Gilbert, or without talking to Irving and agent Jeff Wechsler to make sure of Irving’s feelings.

None of that ever happened. Griffin and Gilbert never came to terms on a contract. Enter Altman, 34 at the time, promoted from his position as Griffin’s second assistant. By late July, Irving’s trade demand had become public, and the Cavs, believing the situation between Irving and James could not be fixed, began fielding offers, feeling Irving’s value was at its highest.

If you remember, David Griffin was one of the first people to even mention Kyrie and Boston in the same sentence. He clearly knew what was going to happen and it’s clear his whole situation also played a huge role in LeBron departing. But here’s the thing with this detail about Kyrie’s demand. LeBron is telling the team to ignore it and keep him, yet isn’t doing anything to solve the issue of why Kyrie wanted to leave in the first place. Was he unwilling to take responsibility for that? It seems like with this whole thing it was more LeBron just telling the team what to do, but then not taking any actions to rectify things, whether it was committing long term or working out his problems with Kyrie. That’s a little messed up.

Obviously, when LeBron returns to CLE, not one person in that arena should boo. If he had left AGAIN only without a title, I’d say boo the shit out of him. But he brought that city a championship, delivered on his promise, and carried them to all those Finals where he was essentially super human. If I were a Cavs fan I would be a little annoyed after reading all about how this trade went down, but at the end of the day anyone with a brain knows that this team was never winning anything if LeBron didn’t come back, and that title is going to give him a lifetime pass in that city.

Makes you wonder though, would everything had been different if LeBron was just the bigger man and picked up the phone and worked things out. Crazy how different the league may have looked.