And so Aaron Rodgers career rolls on as it has for the 8 years – eight – since he last won even a conference championship. The Rodgers Apology Machine is firing up its flux capacitor to 1.21 jigowatts and rolling out the excuses of how the Packers lost in spite of his heroic, metahuman efforts.

Last week he got no help from his defense. Last night it was Mike McCarthy’s fault. For not challenging this call:

And for not going for it on 4th & 2 with 4:20 to go. Which is ironic like rain on your wedding day, given that nine years ago a coach did go for it on 4th & 2 late in a game and has been catching hell for it ever since. But that’s a discussion we’ll have some other time. What’s important now is that all the blood in the water right now is coming from McCarthy and the sharks are utterly ignoring this second half performance by Captain Comeback: 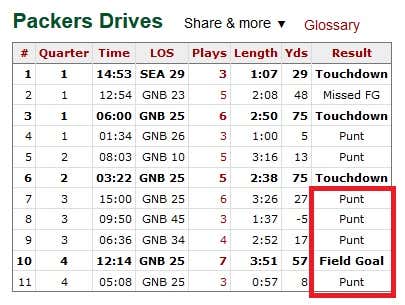 And the fact that there was a dramatic 4th quarter comeback, but it was by Russell Wilson, the 16th of his career. Which moves him ahead of guys like Troy Aikman, Terry Bradshaw, Bob Griese and Joe Namath on the all time list. Where was Aaron Rodgers rank on that list? I’m glad you asked: 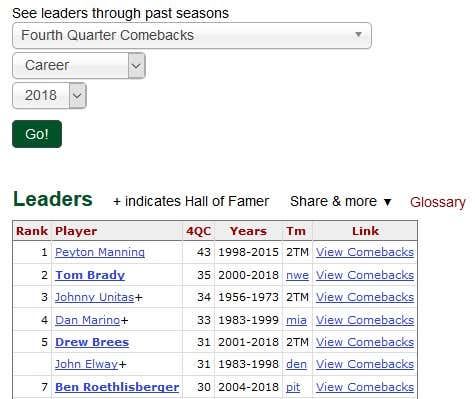 So yeah, the Greatest Passer Ever had a couple of cracks at breaking that tie with Ryan Tannehill in this all important category and couldn’t pull it out, but that’s all on McCarthy. Let’s instead just focus on the Hail Mary he completed a while ago and the two long touchdowns last night:

Short-hopping an open man at the sticks on a crucial 3rd & 2 is not a sign of a quarterback in decline. That’s not us witnessing someone’s career going off a cliff. Father Time isn’t defeating Aaron Rodgers. Mike McCarthy is. Got it? Good. Glad we settled that.

So the Packers, despite having the Best There Ever Was at by far the most impactful position in all of team sports, have like a 30 percent chance of even making the playoffs. And even though ARod gets the Quarterback Matchup checkmark every time he steps onto the field against a mere mortal, this is his record on the season:

But it’s not his fault, it’s everybody else’s. Are we clear on that?