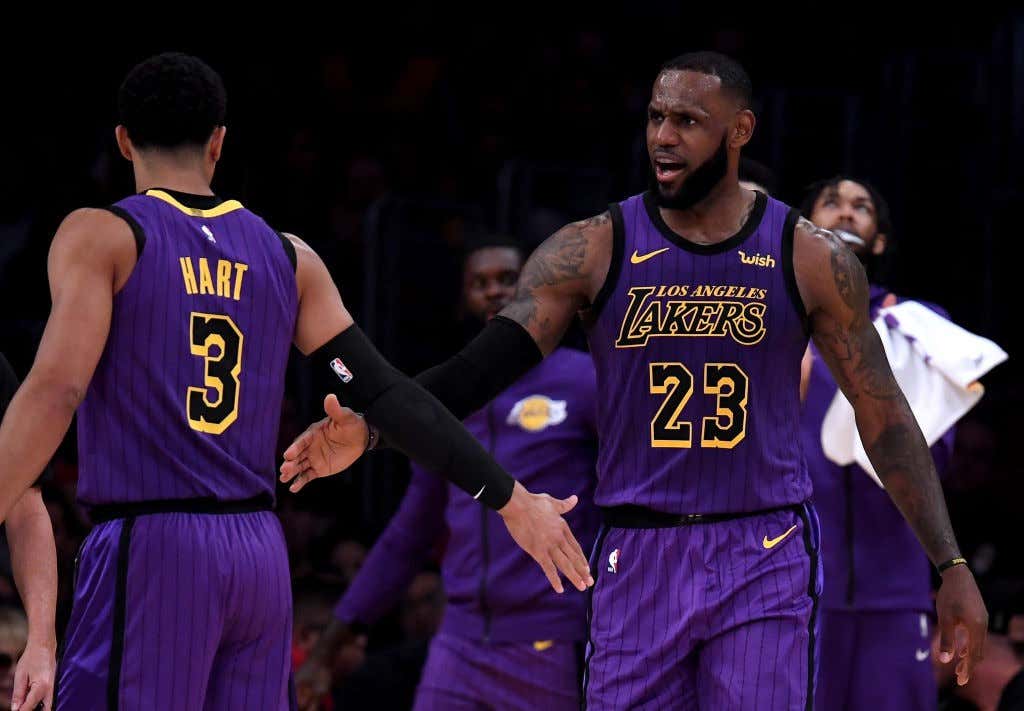 As we know, LeBron passed Wilt last night and is now 5th all time in career points. It was a ridiculous performance that once again reminded us that as fans we are seeing an all time great look better than ever despite being in Year 16. After watching him single handedly beat the Blazers it got me thinking, what other legends are within reach for LeBron to pass this season? When you’ve been as good as he has for as long as he has, you’re talking about some big time legends in NBA history, so I took the time to look around and see what may be within reach

One of the more impressive things about LeBron is that he never seems to get tired, almost never misses a game and doesn’t really ever have to come out. He’s averaging 35 minutes a night which is crazy, and as it stands right now he is on pace to pass some impressive names on this list. To be fair I went and added up his minutes totals from the last 5 years and figured the average would be a fair way to predict what his minutes might be this year. That number is 1,991 minutes. If he were to do that, it would put him at 46,780 career minutes played, which would have him jump the following people: Julius Erving, Robert Parish, Paul Pierce, Ray Allen, and John Havlicek. He would move from 20th to 15th and if he were to somehow maintain that over the course of his entire Lakers contract (which he should) it’ll move him to 3rd all time.

Over the last five seasons, LeBron averages 744 FGM a year. Pretty good. His per game average has lived around that 9.5-10.0 range, and if he were able to maintain that this season we’ll see him pass some pretty impressive names on this list. As of now he’s just 300 behind Kobe, and if he hits that 5 season average he’ll pass: Kobe Bryant, and Julius Irving. A hot month or two could be the difference if he also passes Jordan, who if he makes 744 he’ll trail by just 29 FGM.

Either way, all signs point to LeBron entering the Top 5 all time in this category by the end of this season.

LeBron’s 5 year average in assists is 581. Given that his usage rate is around the same, the one difference here is that his AST% has drastically dipped from 44.4% to 41.7%. That’s why it’s a little ambitious to think he’ll reach that 581 number unless things drastically change, but the one thing we know for sure is LeBron is going to enter the Top 10 all time here as well. Given that he is just 215 assists behind Andre Miller  for 10th, that should be no problem. Up next are guys like Chris Paul and Gary Payton, and obviously he won’t catch Paul this season and it’d be pretty ambitious to assume he’ll get to Payton’s 8,966.

This may be the one area we don’t see him pass too many legends, but getting into the Top 10 is still nice

LeBron’s steals per game are relatively consistent and his 5 year average is 108, so I have some bad news for Lakers fans. He’s about to pass your idol Kobe Bryant. At the moment he’s just 58 steals behind Kobe, and if he hits that 108 number he’ll also pass names like Derek Harper, and Allen Iverson. That would put him 14th all time, and then next year there’s a good chance he enters the top 10 here as well

So as you can see, while moving into the Top 5 in scoring is awesome, it’s not even close to the end of LeBron’s rise up the all time ranks. Obviously this is assuming health, but for a guy that has played at least 74 games each of the last 3 seasons and outside of 2013-14 where he played 69, he’s been in the mid 70s since the 2012-13 season. I know we all hate him because he’s so goddamn good on the court and so corny off it, but any time you can be alive to see an all time great pass legends on a yearly basis, I think that’s pretty cool.

Safe to say he’s lived up to the hype coming out of high school right?