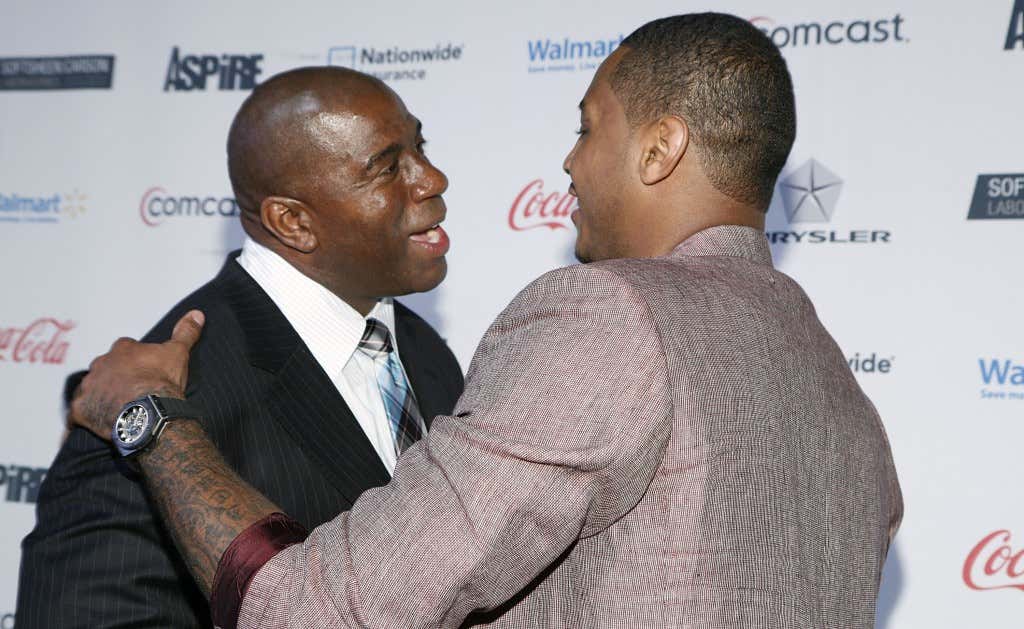 As we all sit here and wait to see where Melo ends up next now that his time in Houston is pretty much a wrap, I couldn’t help but laugh when I saw this clip. First off all, who the hell does Magic think he is requiring Melo to commit to playing defense? Did he mean on the Lakers? Who on that team is committed to playing defense at the moment outside of like Josh Hart. This same Lakers team that is giving up 115 a night and has the 18th ranked defense in the league? Do you think he had the same requirement for LeBron when he made his call in the middle of last season when they first hatched up the plan to go to LA? I’m thinking no. So that part made me laugh, like yeah we all know Melo was going to have to come off the bench wherever he went, but a commitment to defense and trying hard almost makes me feel like Magic had no idea who he was talking to. That also wouldn’t surprise me either. If in reality he thought he was recruiting someone else and accidentally called Melo. That’s probably why he didn’t return the phone call, he heard those words and probably thought there was no chance the call was intended for him.

But now you have to wonder, given the limited options out there for Melo, he should definitely call Magic back right? There’s a strong chance Magic hasn’t watched any of his last 2ish years and still think he can help their shooting issue. Plus as a banana boat member, I’m surprised LeBron hasn’t already made this happen. At this point that’s all Melo really has left, he tried it with Paul and that didn’t work, maybe he’s hitting up Wade to see what can be done in MIA, and then there’s LeBron and the Lakers. And don’t act like the Lakers second unit couldn’t use some help, they rank 19th in points among bench units and even though we all know Melo most likely can’t help, anything to keep LeBron happy after those reports he was already cracking and it’s not even Thanksgiving.

There are reports that Melo’s team is already scanning the landscape to see where he may be able to go, and honestly all he has to do is go to his call log from the summer, find Magic’s number and call him back and he’ll be on the Lakers in no time. In my opinion that’s what this cast of characters needs for the sake of all of our enjoyment. Everyone can tell from a mile away what a disaster adding Melo would be to that locker room and that’s why I need it to happen.

Everyone tweet at Magic and tell him Melo is indeed not washed and he would make a great addition. That’s the chaos we all deserve.