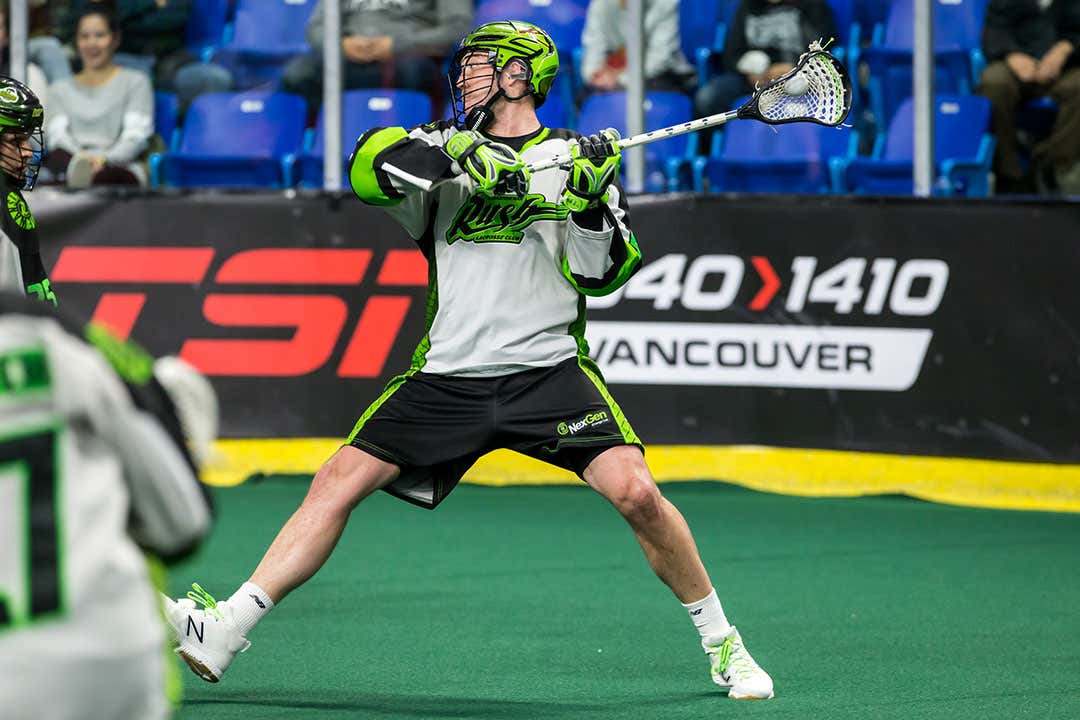 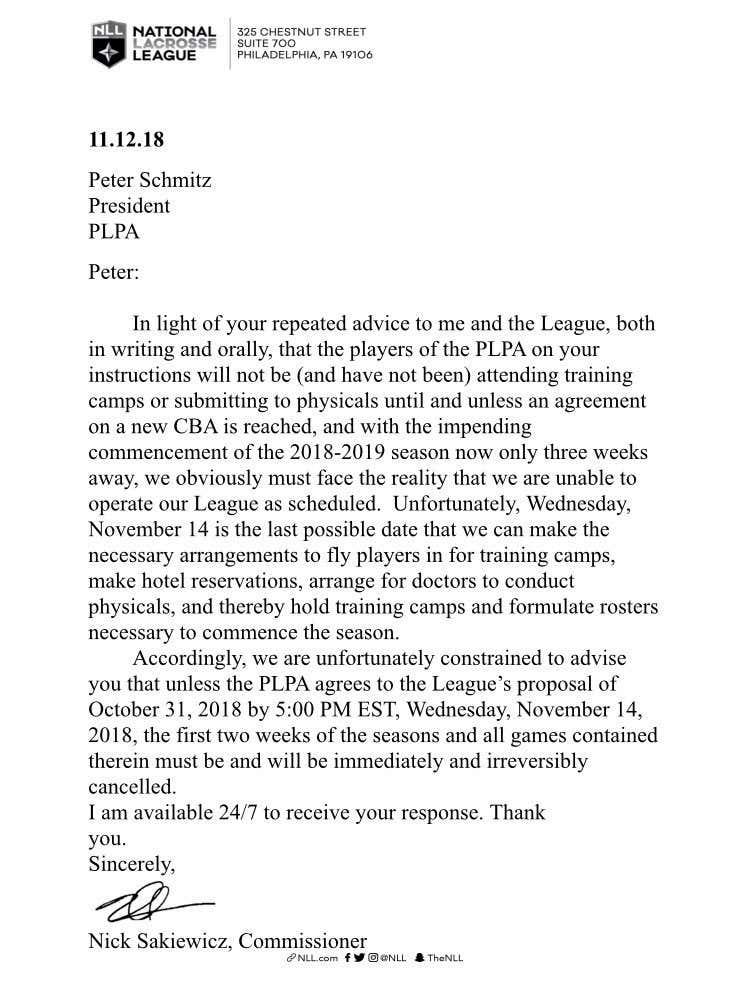 If you’ve been keeping tabs on the National Lacrosse League over the past couple of months, then this isn’t really coming as any sort of surprise to you. There have been talks about a potential lockout for a while now with the players union and the league not being able to negotiate and come to terms with a new CBA for this upcoming season. Players were supposed to report to training camp at least a couple weekends ago by now and the start of the scheduled season is less than a month away. But now it looks like the first two weeks of the season are lost as the sport of lacrosse continues to do everything possible to get in its own way.

Now full disclosure here–I’m probably not going to go scorched Earth in this blog because I have some pretty close connections with both sides here. I don’t want to burn any bridges or anything like that. But what I will say is that this is the absolute worst thing that could possibly happen right now at the absolute worst time. This is an extremely short-sighted argument that is hurting the future of the sport. Obviously losing the first two weeks of the season sucks but it’s bigger than that. The sport of lacrosse isn’t in a position yet where it can handle any sort of bad PR and expect to maintain the interest of people who weren’t already die hard fans to begin with. So many people out there already think of lacrosse as a joke and the moment they see that one of the 3 professional leagues is in a lockout, there’s a good chance they won’t be coming back even after the lockout is resolved. They’ll see a lockout, they’ll think that it’s a joke of a league, and that right there is the stigma that professional lacrosse will continue to carry around. Leagues that can’t function properly and stand in their own way of growth. It’s unfortunate but that’s the reality we’re in. If the NFL goes into a lockout, millions and millions of people will immediately start watching again as soon as the lockout is over. If the NLL goes into a lockout? People who aren’t already fans will just forget it exists and move on. So yeah, the timing of this couldn’t be worse and that’s for a couple of reasons.

For starters–the NLL is in an era of growth and expansion right now. There are two new expansion teams playing in their inaugural season (San Diego Seals & Philadelphia Wings). There are more expansion teams coming in the future with the Rochester Knighthawks moving to Halifax and a new team coming into Rochester to replace them. The Vancouver Stealth (now Warriors) have also been bought by the Vancouver Canucks which will put more money and resources into that organization. The league also signed a partnership with Bleacher Report (gross, but whatever) to modernize the broadcasts of all the games. So there is a lot of hype going into the 2018-19 season and there are a lot of things to look forward to when it comes to the future of the NLL. The fact that this pivotal season is now going to be derailed by a lockout sucks copious amounts of dong. The league is taking two steps forward but one massive leap back.

Now the second reason why the timing here is irreversibly damaging to the league is because in case you haven’t noticed, Major League Lacrosse is in turmoil right now because a new league came in with the intentions of putting the players first instead of business. It’s called the Premier Lacrosse League. Maybe you’ve heard of it.

The entire lacrosse world is gravitating toward the PLL right now because everybody knows this is the future. Everybody knows that in order for lacrosse to finally make the jump to the next level, it needs to be viewed as a sport where players can make a legitimate career out of it. The players are the most important piece to the puzzle when it comes to the growth of lacrosse. The owners, the sponsors, the commissioners and everybody else mean nothing compared to the players. If players still need to work a second job then nobody is going to take it seriously when talking about professional lacrosse. It’s a shame the NLL isn’t following that lead right now and putting the players first because it damages the image of lacrosse players being able to be full-time professional athletes. Which is, of course, the end goal that everybody should be working towards.

And another thing about not putting the players first; I mentioned above that the NLL is currently in an expansion era with 2 new teams starting up this year. So that means that there are 2 new rosters full of guys who are off to a new team. So there are guys around the league who have probably already planned on moving to either San Diego or Philadelphia. But these aren’t millionaire athletes we’re talking about here. These are blue collar guys who mostly all work some form of a second job along with playing pro lacrosse. I don’t know if you’ve ever seen property values in San Diego or Philly before but they’re not necessarily cheap places to live. So you have guys right now who have already planned on moving but they can’t physically move yet because they’re not getting their paycheck to be able to afford rent or a mortgage or whatever. So the league wants to get a deal done right now so that they “make travel arrangements” and “conduct physicals” which seems pretty inconsequential compared to guys who are essentially homeless at the moment until a CBA is signed and they can move into their new homes in their new cities. I realize that the NLL is a business and they need to operate like one, but I have to imagine it would be better for business to not treat your employees like that.

Okay so from my understanding, it seems like neither side is really open to negotiating here. I mean, the two sides have been talking but it doesn’t seem like either side is budging much. The PLPA had attempted to put in an offer for just a 1-year deal on the NLL’s terms just to make sure the season stays intact and they could come back to negotiating a long term deal next year, but the league apparently refused that one. And from the letter at the top of this blog, you can see the league is going with a “take this deal or nothing at all” type of approach at the moment. I don’t have any idea about any of the numbers involved in the negotiations but from what I’ve heard, it sounds like there’s a couple thousand dollars holding everything up. Now I understand that a couple thousand dollars doesn’t sound like a ton of money but when you consider what these guys are making, it’s pretty significant to the players. Especially so for the younger guys who haven’t been able to really save up anything yet.

But on the other side? Well let’s think about some new ownership groups coming into the league. You have billionaire Joe Tsai who bought the San Diego Seals. You have a billion dollar company in Comcast who purchased the Philadelphia Wings. You have the Vancouver Canucks who bought the now Vancouver Warriors. Billionaire Terry Pegula is buying another team. So the players see all this growth and all this new cash flowing into the league and all they want is a fair piece of the pie. A couple thousand dollars doesn’t mean anything to these owners, but it means a ton to the players. Again, I’m not certain about any of the actual numbers holding up the negotiations but I haven’t heard of any outrageous asks out of the players union side. To me it seems like the owners are being stingy, the players want a fair deal after getting a little steamrolled for the past few years, and there are a bunch of people floating around in the middle of it all. The players are ready to go but they just don’t want to get stuck in a shitty situation for the next few years because the owners are being greedy. And the league probably knows that the players don’t want a lockout and they’re attempting to scare them into accepting a deal now by putting a deadline on the offer before cancelling games. Personally I think both sides are bluffing but they know that the other side is bluffing so they don’t want to be the one to cave first. Which is how we got to where we’re at today. And where do we go from here? I’m not too sure. I’m sure that a deal will get reached at some point over the next week or so once the pressure really gets put on the teams who have to cancel games and refund tickets. But if for some reason this goes on long enough to jeopardize the Philadelphia Wings season opener on December 15th, well then we riot.  Full fledged riot.