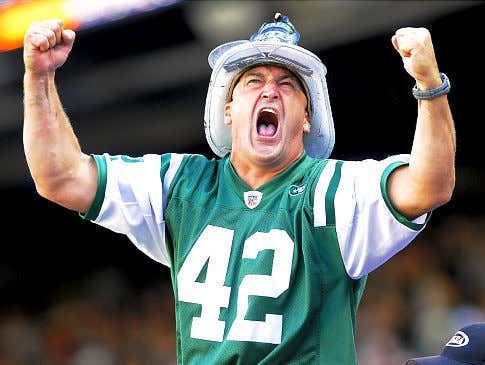 Source – A man arrested for a drunk driving crash in New Jersey last weekend gave officers a bonkers excuse for his drunkenness and the accident that followed: the continuing suckage of the New York Jets.

Christopher Greyshock, a 57-year-old man from West Milford, New Jersey, was arrested after rear-ending a car and injuring two people on Sunday, a short time after the Jets had been soundly thwacked by the Buffalo Bills 41-10. The North Jersey Record reported that police were called to the scene of an accident that had taken place at 5:15 p.m., and two people were being treated by paramedics when they arrived.

As officers approached Greyshock, Capt. Larry Martin told the Pascack Valley Daily Voice that Greyshock was “staggering and swaying,” nearly falling into traffic and unable to stand up straight. Greyshock also had liquid stains on his pants and officers could smell liquor on his breath, so they administered a field sobriety test. Unsurprisingly, Greyshock failed. After he failed the test, he gave the officers his reason for being so drunk.

“I drank too much because the Jets suck!”

I don’t approve of Christopher Greyshock’s actions. I won’t try to excuse them away. Drunk driving is a serious offense. He could’ve harmed, maimed or killed himself or others so I can’t justify in anyway what he did. But I understand it.

Simply on a human level, you’ve got to feel for this poor, miserable soul. Even at the age of 57 – almost old enough to be cashing in on his 401K – this wretched creature still hasn’t learned to cope with the utter futility of his life as a Jets fan. Pissing his pants. Staggering and swaying. Slurring his words. Swerving all over the road. Crashing into somebody else. All because he had to drown the feeling of utter hopelessness in an ocean of sweet, sweet booze.

Yes, it’s wrong. But at the same time it’s profoundly sad. I hope that when The State of New Jersey v. Greyshock finally goes to court, the jury will take some degree of pity on him. The way you would a guy who got ripped because he had a death in the family. Or George Bailey slamming into tree in Bedford Falls because the Building & Loan was missing $8,000, his life was a shambles and he thought he was going to jail. They’re called “extenuating circumstances.” And circumstances don’t get any more extenuating than getting blown out by Matt Barkley and the fucking Bills.

It’s stories like this that really put 7-3 at the bye in perspective. Thank you, Christopher Greyshock. I needed this. Cheers!