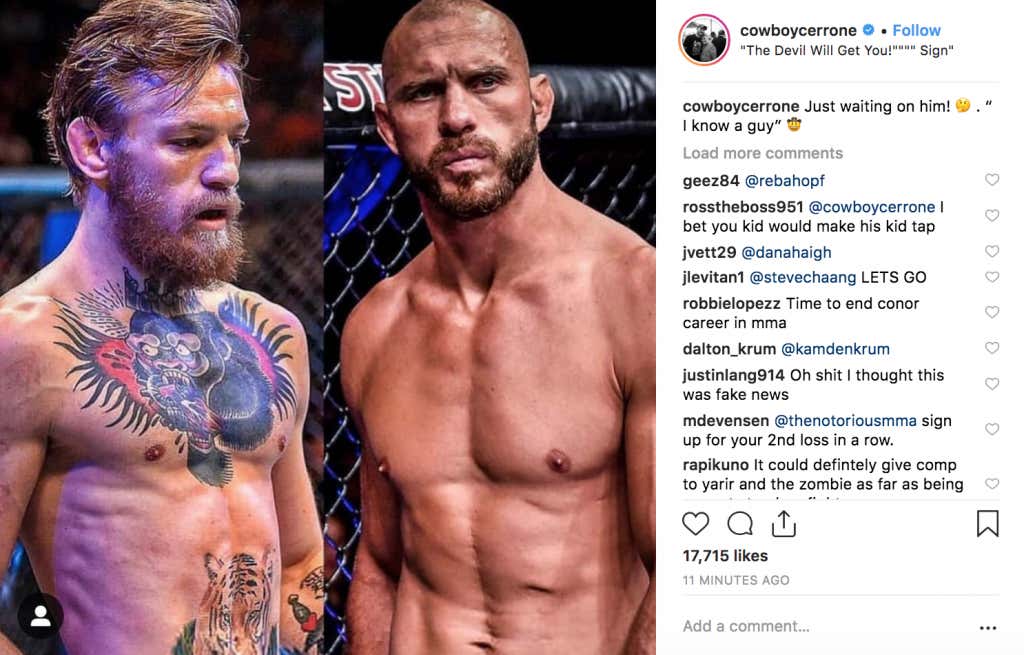 After picking up a phenomenal first round submission over “Platinum” Mike Perry this past Saturday night – breaking the UFC all-time victory AND all time finishes records – Donald “Cowboy” Cerrone made it known that he had his eyes set on a move back down to Lightweight, calling out champ Khabib Nurmagomedov, but later said that the UFC had presented him with a “very exciting” opponent everyone would be happy about…

Instantly, a few names came to mind: Justin Gaethje, Dustin Poirier, Jose Aldo, Anthony Pettis, Tony Ferguson, and then dark horse Nate Diaz, you know, all fighters willing to throw down in the center of the cage in classic “Cowboy”-fashion……and then I guess super duper ultra never-in-a-million-years but maybe because shit’s crazy, Conor McGregor. I reeeeaaaally didn’t think it was Conor, though. I thought it was Justin Gaethje. Then…earlier today…I found out it wasn’t Justin Gaethje.

My heart sorta instantly skipped a beat, realizing this just massively narrowed down the options for who the mystery opponent could be, and then I flashed back to reading the usually unreliable Irish tabloids running with a rumor that it was the Notorious who’d be interested in this fight a few days ago. Then, I re-analyzed everything Chael Sonnen said in this YouTube video explaining why he thought this fight had actually developed into a legitimate possibility…

…and then the gears started turning in my brain, slowly but surely starting to ignite the #TeamMcGregor fire under my ass, being teased with the idea of being able to go to war for my guy in the near future.

I could totally see McGregor sitting at home, watching UFC Denver on Saturday night, and being impressed enough by “Cowboy” Cerrone’s performance/post-fight interview and overall promotion of the fight to shoot Dana White a text that says like, “Tell Donald he’s next.” or something right afterwards. And that’d make Cowboy’s ominous upbeat attitude completely justified. After all, Dana did say at the UFC 230 post-fight presser that he’d just spoken to Conor McGregor on the phone for an hour a week prior, and that the Champ Champ was extremely eager to get back in the cage and start working his way back towards his Lightweight Championship, no matter who he was facing.

To add a little more smoke to the fire, McGregor and Cerrone famously got into it a few years back at the UFC’s “Go Big” Press Conference, which would provide perfect fodder for a video package:

Now, after all of these rumors, clues, and whateveryawannacallems, Cowboy posts a photo of both he and McGregor to his Instagram, claiming he’s signed his half of the contract and is just waiting on Conor to sign his. Obviously, McGregor is awaiting a suspension from the Nevada State Athletic Commission (which I may have to break out the bullhorn for depending on the severity), and this could just be a cry for publicity by Cowboy, but I don’t think he’s thank kinda guy…I and kinda think there’s a real chance we could be on the verge of McGregor vs Cowboy. And if that’s the case – I can’t fucking wait.

He’ll be slept in one…when the sheriff comes to town. 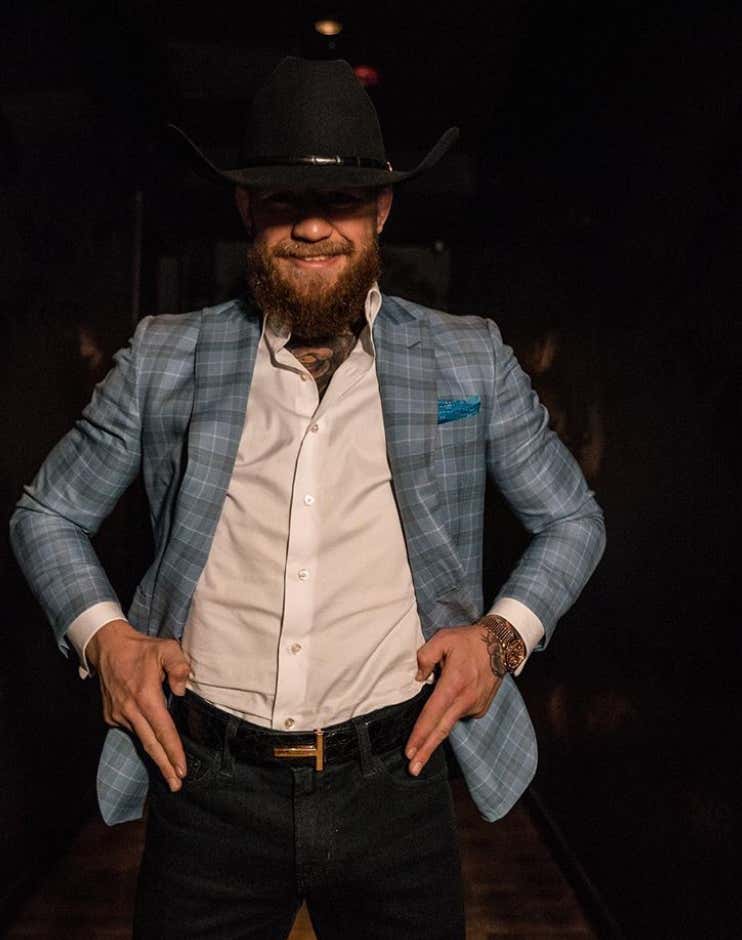