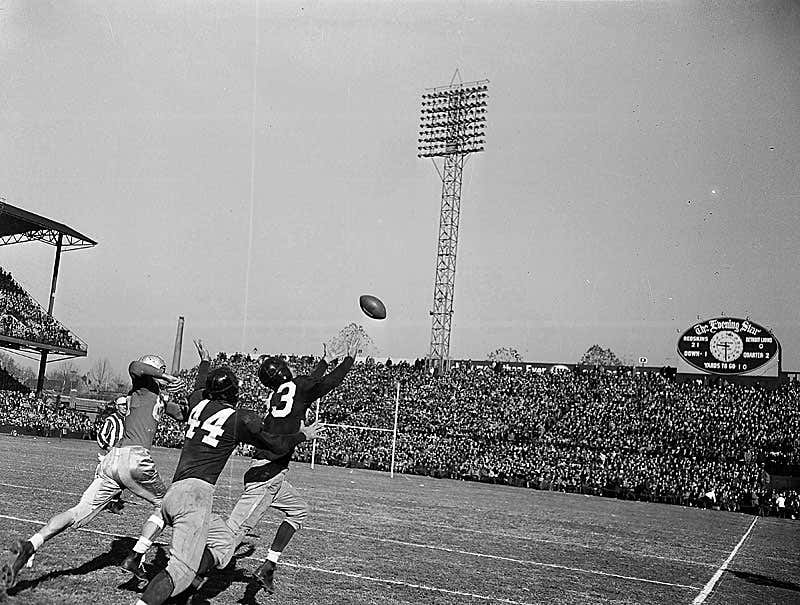 Slingin’ Sammy Baugh of the Washington Redskins stars on both sides of the ball in a 42-20 win over the Detroit Lions at Griffith Stadium. Baugh accounts for most of the Redskins offense throwing four touchdowns, while on defense he became the first player in NFL history to a have four interceptions in a game. Sammy Baugh also played on special teams and had an 81-yard punt.

Sammy Baugh was born on March 17, 1914, in the rural parts of West Texas, a versatile athlete he became a star at Texas Christian University in Fort Worth. In 1936, in the awards second season, Baugh garnered enough attention to finish fourth in voting for the Heisman Trophy. Picked sixth in the 1937 draft, Sammy Baugh became a star right away with the Washington Redskins, leading them to the NFL Championship. Baugh and the Redskins again won the NFL Championship in 1942, setting up the best season of his career in 1943.

On Halloween against the Brooklyn Dodgers, Sammy Baugh became the first player in NFL history to throw six touchdown passes in a game as the Redskins won the game at Ebbets Field 48-10. The record would be topped two weeks later by Sid Luckman from the Redskins archrival Chicago Bears in a 56-7 win over the New York Giants in the Polo Grounds. While Luckman was shredded the Giants, Slingin’ Sammy was having a more impressive day, showing just how versatile he could be. Once again, his arm was providing for all of the Redskins offense as he completed touchdown passes one to Bob Masterson and one to Bob Seymour. Lou Rykmus meanwhile gave Washington a 21-0 halftime lead at home. In the third quarter, Baugh completed his third touchdown pass to Bob Masterson for ten yards to make it 28-0, while the Lions got on the board as Frank Sinkwich showed the ability to go both ways like Baugh throwing a touchdown pass and returning a Baugh pass 39 yards for a touchdown to make it 28-13. The Redskins got back on track in the fourth quarter with a 41-yard run by Andy Farkas, as Sinkwhich added a second touchdown to Bill Callihan. However, it was Sammy Baugh’s day all the way, as the Redskins everyman had a fourth touchdown pass for four yards to Joe Aguirre to make the final score 42-20. In the same game, he also had an 81-yard punt and four interceptions, setting a new single-game record.

The four interceptions remain an NFL record that has been equaled 19 times but never topped. This includes Jerry Norton of the St. Louis Cardinals who did it twice. The most recent four-interception game was DeAngelo Hall of the Washington Redskins against the Chicago Bears in 2010. Sammy Baugh finished the 1943 season with a record 11 interceptions while passing for 1,754 yards with 23 touchdowns and leading the league in punting average. Baugh’s record would last seven seasons when it was topped by teammate Dan Sandifer with 13. Sandifer was later topped by Dick “Night Train” Lane of the Los Angeles Rams with 14 picks in 1952, which remains the record. The Redskins would go on to play in the NFL Championship but lost to the Bears 41-21.