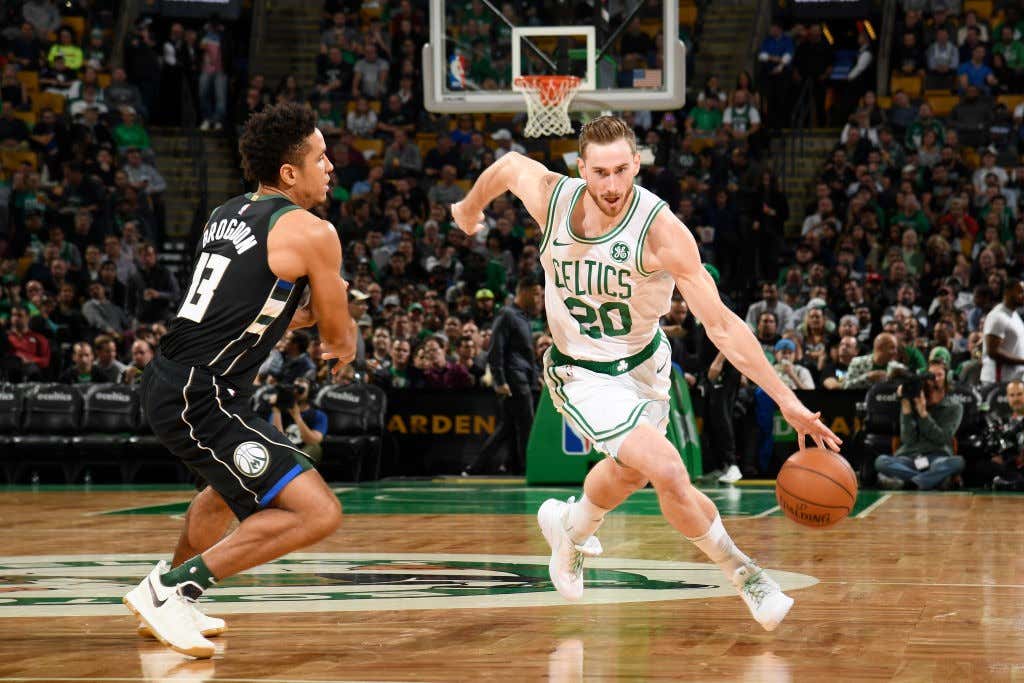 In a word, yes. I could end the blog right there but I won’t. By far this is the biggest question I get from stoolies and one that I see asked everywhere on the internet when it comes to the Celtics struggles. Is Gordon Hayward capable or being the same player he was before he got hurt? Are there any signs that progess is actually happening? What I’ve noticed, is people love to talk about how “he doesn’t have a burst” and that based on what we’ve seen in the first 12 games that his days as an All Star level player are over. I find that extremely silly because what you do when you say stuff like that is you completely ignore 90% of what he does on a basketball court.

Yes, his offense has not come around yet. But since when does scoring completely define a player? If Hayward had been awesome at scoring but really bad everywhere else, would people think differently? Well thanks to NBA.com and their tracking statistics we can look at the whole picture of how Hayward looked pre injury compared to what we’ve seen so far. I took the time to look into this partly because I am a lunatic, but also because I feel like people talk about Hayward and his situation without doing any of the research, and I simply want the facts out there so we can all be on the same page.

The first thing we’ll look at it how Hayward is running. The NBA tracks average speed on offense and defense and this is how he compares to what was his best season of his career in 2016

Right off the bat this tells us that Hayward is moving better this year than he was back in 2016. Coming off an ankle injury I find this pretty important, because a lot of concern lived around if he was going to be able to move the same way once he got back. Mind you, this is without him really being in the best basketball shape either, but nothing we’ve seen from him when it comes to actually running should give you any concern. If anything, it should make you confident.

Next let’s look at his jumping. I’ll classify this in terms of his rebounding.

We see the same story here as well. Hayward is off to a better start and has shown no signs of not being explosive on the glass. We’ve seen him get rebounds in traffic, we’ve seen him have to utilize a second jump to secure rebounds, nothing here is telling us his ankle is giving him any problems or holding him back.

Now let’s turn to defense. I’ll have you know that Hayward’s 104 Drtg so far is the lowest of his career, and it’s not as if UTA was a poor defensive team while he was there. But knowing that Drtg is a team oriented stat, let’s look at how he defends per 100 possessions so far

Here’s the thing that’s also true when it comes to Hayward and his defense that has to be said. When players attack him, they’ve been successful. Opponents are shooting 48% on defended FGA when Hayward is there, compared to 42% when he was in UTA. This is the one area where Hayward’s defense hasn’t totally come around yet. Players are attacking him and he’s figuring out how to handle that. I don’t exactly expect his 48% to be that high all year, but it is the one area defensively he has struggled.

Offensively, this is probably the biggest difference. Obviously his 9 points on 39/31% splits isn’t exactly what this team needs. But percentages aside, is there anything we can compare in his approach that should make us feel more confident that Hayward is going to get better?

Now there are a couple factors to remember here. First, Hayward is on a minutes restriction which limits his opportunities. He also has a much lower usage rate (19%) compared to what he had in UTA (27.6%). This is where it gets tricky when you try and compare Utah Jazz Hayward offensively to Boston Celtics Hayward. Things were always going to change, and probably dip compared to the production and the usage he had in UTA. That’s the nature of being on a team with so many options. But what I wanted to know is if Hayward is being less aggressive because he doesn’t trust his ankle. Here’s what I found

Factoring in the minutes difference, Hayward drives around 19% of the time so far this season, which is down from 26% of the time that season in UTA. Obviously not being the primary ball handler and not being used as much in P&R impacts this, and as of now Hayward is third on the team in drives per game slightly behind Jaylen Brown. To me this is more a team problem as this Celtics team does nothing but shoot threes, but perhaps one of the ways to solve Hayward’s offensive issues is to give him more situations where he can attack, because he flourished with that in UTA. Remember, Hayward is getting just 42.3 touches a game, down from 62.5 that last year in UTA. Of course this is going to impact his offensive production.

I think when people talk about Hayward’s explosiveness, they are referring to his dunking and above the rim play, which we haven’t really seen. We did see him have that nice trailing block in the preseason, so I’m not so sure it’s a case of Hayward not having that leaping ability anymore or not having his first step back because as you see he’s playing faster and rebounding better so far this season. He just hasn’t had that monster dunk yet.

It’s important to remember how major his injury was, and the fact that it’s just 12 games into the season after missing a whole year. I know people use the Paul George comparison but that’s not really fair. George had a stretch at the end of the season to come back, and then had a whole summer to get stronger so he looked like himself at the start of the year. Hayward hasn’t had that, and is figuring things out as we go. But it’s pretty clear that if you look deeper than just his points and his shooting, you’ll see a guy that looks a lot like the Hayward we were expecting. The defense is there, the playmaking is there, the rebounding is there, honestly the only thing lacking is his scoring, which in my opinion is to be expected.

So please, take a deep breath when it comes to Gordon Hayward. Try and give him a couple months to find his footing within this offense because all the other signs are there. He’s going to be fine, and no he does not need to move to the bench.