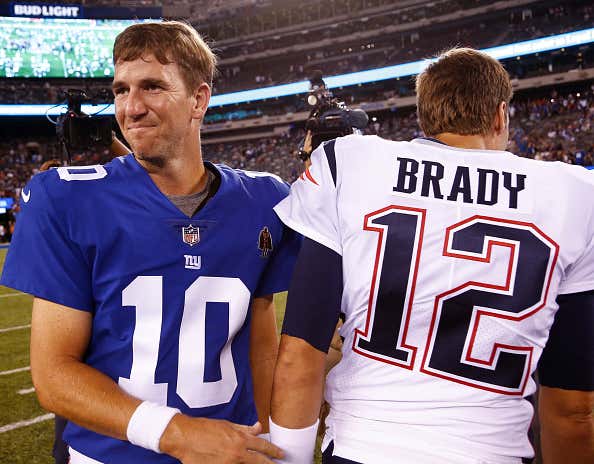 NY Daily News – For those two minutes, Manning put out of his mind all of the doubt in his abilities. …  He will remain the Giants’ starting quarterback for their next game against the Tampa Bay Buccaneers, trotting out in front of an adoring home crowd just trying to win another game, keeping it simple — the way Eli does, especially in the clutch.

NY Post – Eli Manning is not dead yet. Not after the 37-year-old quarterback — who’s become a human punching bag as the centerpiece of the Giants’ struggles for the better part of the last two years — did what he did to the 49ers on Monday night at Levi’s Stadium, engineering his 41st-career game-winning drive (including playoffs) to lead the Giants to an exhale of a 27-23 victory. …  This remains Manning’s team.

NFL.com – Is it finally happening? Is Tom Brady … getting old? The G.O.A.T. authored up another flawed, human-like performance in a lopsided loss to the Titans. … My game notes keep questioning arm strength and mobility.

Max Kellerman – Tom Brady has a wet noodle for an arm right now. Let’s just say what it is. They’re dinking and dunking teams to death. If we’re going to sit here and pretend that arm looks the same to us, come on. Why is he off target so often? Look at the throws when he tried to put mustard on it yesterday. I’m not inventing this.

And there you have it. My entire world view, reduced to about 240 words. You think Patriots fans are deranged? You think we believe this team is persecuted? That we look around and see one set of standards for them and another for the other 31 teams? Well here is People of New England’s Exhibit No. 19,630. We’d like to publish this to the jury, Your Honor.

What was last night for Eli Manning? Redemption. Further confirmation of what has long been universally established: That he is Mr. Clutch. Captain Comeback. The Titan of the Two Minute Drill. People have been saying he’s in decline? Well you can stick that decline talk up yer arse, mister. Look at that win for the ages! How can you bench a guy who’s still capable of putting up 7 big points in the 4th quarter against the 2-8 San Francisco 49ers? How do you doubt that ability? Or question whether the Giants (2-7) are Eli’s team?

Meanwhile, what are we saying about Tommy Cliff? He’sold. No strength or mobility left in his feeble body. Father Time has knocked him to the ground and is slapping him with his own weak, old Noodle Arms saying “Why you hitting yourself, huh? Why you hitting yourself???” The fact that he’s led his offense to the 4th most points in the NFL be damned. Never mind those games with Dwayne Allen as the only tight end in a tight end-centered offense. Don’t tell us about Cordarelle Patterson playing tailback. Forget those three games of 38 points. Or the 43 he put up against an undefeated Kansas City team. That’s ancient history. He was so much younger then it doesn’t matter any more.

And you know what? I’m not even bitter. I wouldn’t have this any other way. Of course there’s a double standard. There has to be. Because Tom Brady has set such a standard that no mere mortal can be judged by it. There’s not another quarterback in the history of the world who could have a 6-game winning streak snapped on the road against a playoff team and be declared legally dead. He’s that 4.0 student who can’t get an 89 on a quiz without the teacher wondering what’s wrong with him. He’s that co-worker who hasn’t called in sick in 10 years, and one day the train breaks down so he’s 15 minutes late and the boss calls him into the office to ask what the hell is going on. Meanwhile the Elis of the world are that remedial student getting straight C-‘s and every time he does above average work he gets it put on the bulletin board with a “GOOD JOB!” sticker.

So hell yeah, I’m paranoid. But as I’ve said before, being paranoid doesn’t mean everybody isn’t really against you. And there is nothing more in the world I want over the bye week than for everybody to keep singing the praises of mediocrities like Eli while loudly and confidently declaring that one below-average game from Brady means it’s time to take the GOAT out back behind the barn. Please keep it up. I’m begging you.