Well, well, well, what do we have here? Looks like some trouble in paradise if you ask me. I mean Draymond trying to take over as the star with Curry out. Refusing to acknowledge even giving Durant the ball. You know him? Kevin Durant – the guy that’s probably the best offensive player in the history of basketball? Yeah, may want to get him a touch with the game on the line.

The sneaky best part about this all? Klay in the middle of it. You know he doesn’t care what’s happening between the two of them. I mean look at this guy: 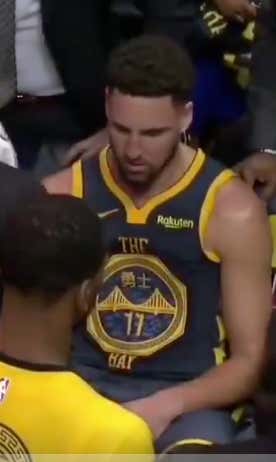 The stretch of :30-:35 on the video is hilarious though. Durant just chuckling, shrugging his shoulders and nodding his head. You know Draymond is spewing some nonsense – likely how they won before Durant was around. Durant probably responding ‘Okay, Draymond, you right. You right. You’re a star. You don’t need me. Go ahead and let’s see this play out.’

So, Durant to the Knicks confirmed.