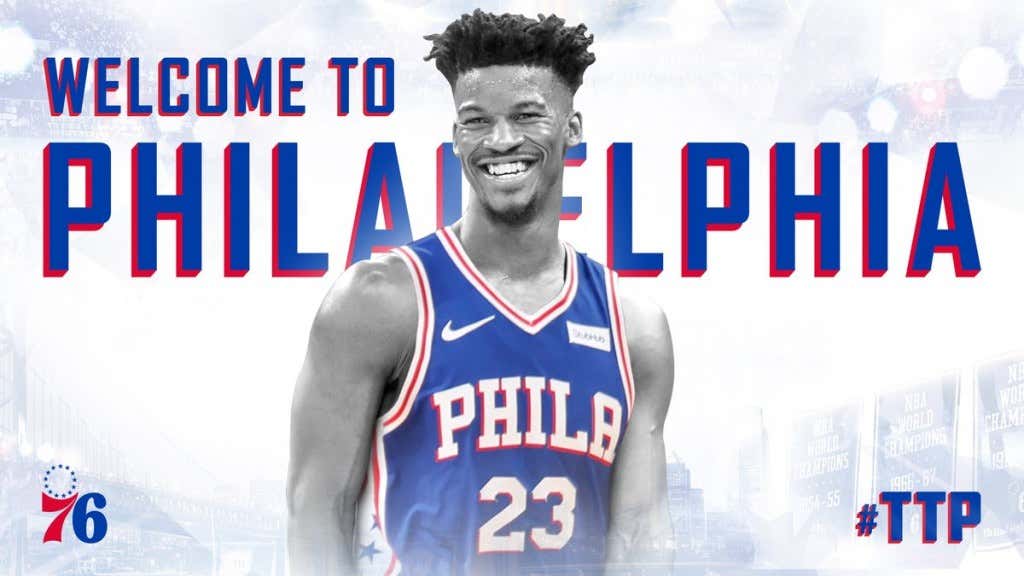 The Sixers are going for it, no doubt about it. They feel like in a wide open East this move makes them legit contenders and and despite questions about fit and all that stuff, the facts are they added an elite player when healthy and motivated and there are things that Butler is going to bring to this Sixers team that they desperately need. While we have no clue how it will work, there are a variety of areas where in theory Butler should make a noticeable impact that will be important if this team wants to have the postseason success their fans think they are ready for. So for all the Sixers fans out there, I wanted to take a look at what this team already does well and how Butler fits into that, as well as some areas they are lacking that match up with Butlers skillset so you could have an idea of what to expect once he finally starts playing. Here’s what I learned

Right off the bat, this is going to be the most obvious change in my opinion. You see the Sixers do a lot of things well on the offensive end, but driving the basketball is not one of them. In fact they barely do it, ranking 29th in the NBA in drives per game. This isn’t necessarily a bad thing so don’t view it that way, for example GS ranks 30th. Instead, look at it as an additional area that defenses are now going to have to worry about when guarding Butler and this team. So far this season, Jimmy Butler ranks 14th in the NBA in drives per game at around 13.4, or just under Giannis at 13.7.

This is important for a variety of reasons. First, having someone who is in attack mode and a guy who is great at getting to his spot if going to have to force defenses to react. With Redick most likely being a starter, they are going to have at least one shooter to help create space, but really I care about this for what it will do with Embiid. Bigs haven’t really had to worry about making a decision against this offense because nobody really creates his own shot with the intent to score. Butler does, so now opposing defenses have a dilemma, because the second you leave Embiid you can pretty much guarantee that’s going to be a dunk.

Improvement in the clutch

As of now, the Sixers are about average in terms of offense in clutch play and then pretty below average defensively. When things get tight they have a 103 Ortg which is 18th and a 117 Drtg which comes in at 22nd. Their two best players (Simmons/Embiid) haven’t thrived so far during these times, with Embiid having a -14.1 Net rating and Simmons a -2.2. Here’s where Butler comes in. Last season Butler averaged 4.3 points in clutch situations which as of now would be 2nd on the Sixers. To me it’s not so much his production that is going to benefit the Sixers most, but the fact that now the defense has another option to legit worry about since it always seems like Butler rises to the occasion. Right now, they know the only real option the Sixers had when things get tight is to dump it down to Embiid. Simmons hasn’t really stepped up in this area yet, scoring just 1.6 points in clutch situations. Even if you have to move him off ball, the fact that the Sixers will not be as predictable when the games get tight is a huge win for them.

Right now, the Sixers are giving up 112.9 points a night and are the only team in the top 6 in the East with a negative point differential. It’s safe to say they could use some improvement on the defensive end. Now losing Covington may seem like it hurts, but what if I told you Jimmy Butler averages more deflections (3.6, 3rd in the NBA), more loose ball recovered (1.9, 7th), and more steals (2.4, 3rd) than Covington? This type of activity alone is why I think Butler is going to be a defensive upgrade for PHI. Not to mention he’s been holding opponents to 48/38% splits.

Much like RoCo, the Sixers are going to be able to throw Butler at essentially 1-4 positions and let’s not act like he hasn’t proven to be an All NBA defender when healthy. I know Convington just made an All NBA Defensive team, but he also got a little exposed in the playoffs. I would say Butler’s intensity is going to help a team that is used to playing defense at a high level

Scoring in the paint

We all know Embiid is a monster in the paint, but when you look at things from the guard/wing position, this has been an area of struggles for PHI. A lot of people talk about how Butler doesn’t help them stretch the floor, but what he absolutely does is give them a more reliable option outside of Embiid in the non-restricted area. For example, here are the main current Sixers FG% in this zone

Both Saric and Covington came in at 31.6% and 25%. So far this season in MIN, Butler averaged 3.4 FGA in this zone which would be the second most on the Sixers, and he shoots a very respectable 44%. That’s 6% higher than Embiid, who is legit unstoppable there. So put it all together, you have a guy who is going to be so much better at creating his shot and driving the basketball, and then once he gets into that zone is by far the best shooter PHI now has in this area. That’s big.

I don’t need to rehash the on/off stats with Fultz, we all know they aren’t great. Well what this trade now does is it gives the Sixers more options in terms of their lineup. They now no longer need to heavily rely on TJ McConnell because now they just added a guy who you can absolutely use as a ball handler in non-Fultz lineups. This is important because while people have been focusing on Simmons moving off ball being a problem, I think it all depends on how Brett Brown uses him. For example, what if when they have Butler as the primary ball handler they post Simmons up more? He only does this 12% of the time so far this season, but averages 1.00 points per post up possession and shoots 54.5%. That’s not all that bad when you think about it. Embiid does it wayyyy more at 30% and averages 1.01 points per possession. Who’s to say the Sixers can’t counter the lack of shooting by now having Simmons spend more time on the block and use Butler as the facilitator?


It’s fair to question how Butler solves some of the current issues on this Sixers team, but it’s also true that the areas in which he excels in are some exact areas the Sixers struggle in. To me the fact that they become less predictable is probably the biggest thing, because now they have another legit weapon for defenses to worry about. It’s going to be fascinating to see how this all plays out, and I think like with everything it’s going to take some time for everyone to learn how to play together, but if this was a move that is supposed to really pay off during the Spring, Jimmy Butler may prove to be exactly what the Sixers need to prevent another quick exit. At the very least what he does is no longer allow PHI to have any excuses. You have the talent, you have the coaching, now let’s see if you can put it all together.