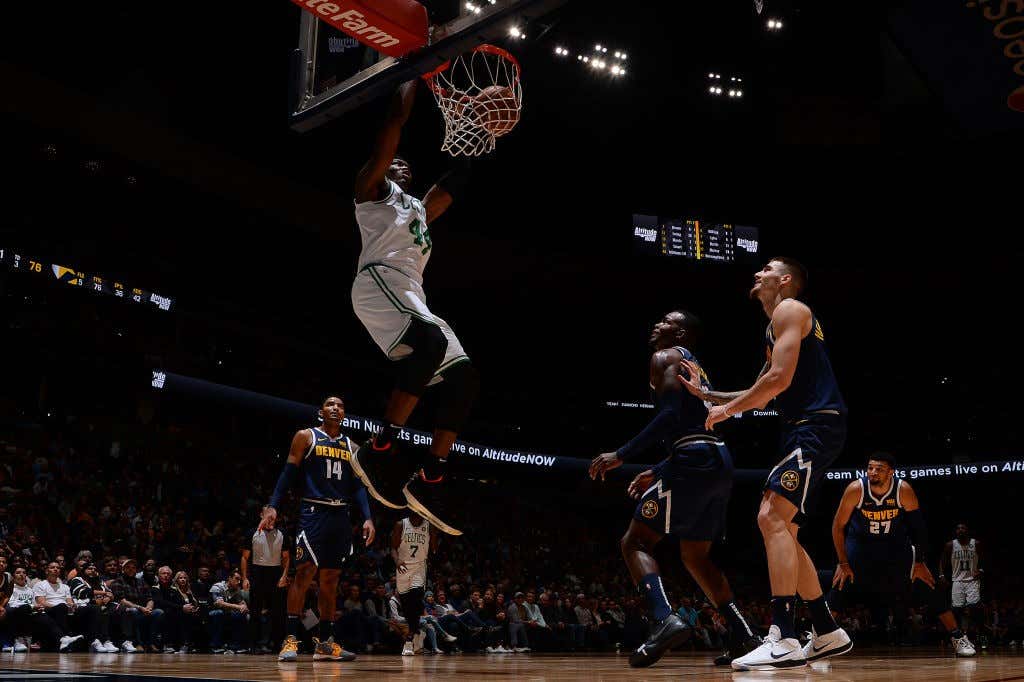 As we know, times are tough right now. The Celtics look like dogshit, other East competitors either look great or just added elite talent, and with each passing game not much looks all that better for the Celts. So while Brad tries to figure out what the hell is going on and how to fix it, we can all join together and ignore out problems by focusing on the best plays from the last week. I know it’s not much, but my brain needs absolutely anything to distract me from the god awful basketball we’ve seen over the last week. As a reminder this covers the week of 11/5-11/11 which were the DEN/PHX/UTA/POR trip, where the overall results were bad, but there were still a handful of good moments. Of course this is subjective, so if there’s a different play you liked from the last week that I didn’t mention, just list it in the comments below

I’m including this play as video proof that this team can in fact have good ball movement. No more excuses for stalling offenses or plays where someone holds the ball for 20 seconds and then takes a bad shot. I have seen it with my own eyes, this team can move the ball when they want to, and obviously when that happens the Basketball Gods reward you with a prayer bucket like what Horford had here.

What a tough shot this was from Kyrie. Anytime you have all your momentum going one way, then you pump fake and immediately go back up with it and hit nothing but net I’m impressed. Sure it was all for nothing given they blew that quarter and couldn’t stop Jamal Murray, but that doesn’t make this any less of an impressive shot. These are the kind of Fuck You Threes that make you have to live with Kyrie and his shot selection. He gets that Isaiah level pass where you just live with whatever he decides because he can make stuff like this on the regular.

Listen you give me any signs of Gordon Hayward returning to form I’m going to include it. This pull up from deep was one of those moments and considering he’s struggled big time from deep (I know his foot was on the line), this was great to see. To me this told me Hayward is starting to feel more confident, and it gives us a preview into the different options Brad can utilize with Hayward initiating the offense. We saw this week his playmaking ability when it came to getting others involved, so this shot right here tells me that eventually teams will have to respect his pull up ability from deep similar to how they have to with Kyrie

He didn’t have many opportunities this week, but this play from Robert Williams was awesome. Sort of makes you wonder why he couldn’t get at least a little bit of burn in any of the games following this considering the Celts frontcourt didn’t look all that great, especially on the glass. Some might just see an innocent OREB and dunk, but to me I see the future. Sooner or later Brad will unleash him for like 10 minutes a night and we’ll be getting more of these type of monster dunks.

No brainer for our top spot in my opinion. Not only was this a great ATO from Brad, but it was yet another situation where Mook was not afraid of the moment and came through in a big spot. Also cool it happened in PHX given everything that went on with him in the past with that team. Sure the Celts got lucky because the Suns messed up and didn’t foul, but without this shot we feel even worse about this horrific road trip. I thank him for that.