CB (via tipster) – “Chelsea Handler was at the eagles game tailgate yesterday. No one knew it was her at the time. She was baiting fans into interviews. For example her video crew claimed they wanted to interview people about the super bowl win and the food that they were cooking. They did multiple shots of the grills and tailgate buses. Then proceeded to interview people about the Super Bowl and general eagles questions. Out of nowhere during this interview she turned the questions into our thoughts on Malcolm Jenkins protests, Kap kneeling and Black Lives Matter propaganda. The questions were purposely asked in a way that no answer would be correct. Her producer set up people to get a reaction. For the interview I was witnessing the guys being interviewed declined to answer the questions after they realized they were being set up. Some signed a waiver before this interview as they were told this was an “eagles fan documentary”. We watched her do this to multiple people yesterday in the tailgate lot. I don’t keep up with her but this 100% will be used in whatever she does these days. Just a heads up to give you guys a chance to tell the real narrative of what really happened when this bullshit comes out and eagles fans are trashed by national media per usual.” 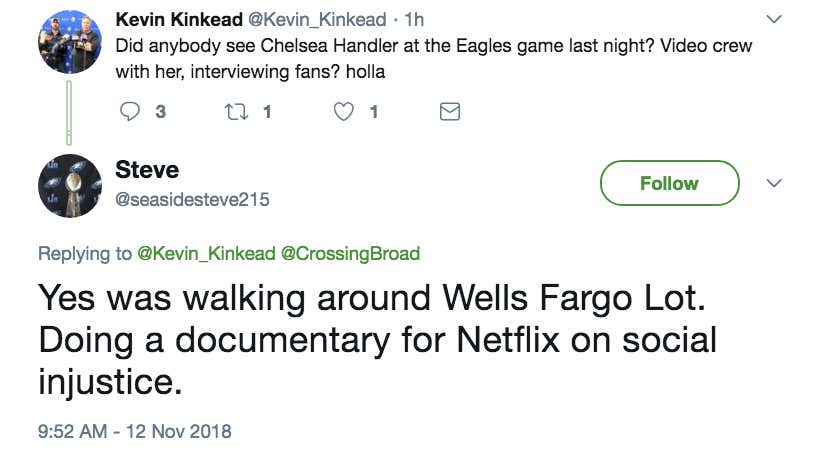 Gonna have to borrow the book for Michael Scott’s PR crisis management and get in front of the story before it even becomes a story. I don’t know for sure, but we all know for 100% certain this is NOT going to look good for the city of Philadelphia when her Netflix special drops. Nope. No Siree Bob. First off, if you want to have a intelligent discussion on the political and social discourse in America today, obviously you want to hear from Joe from Jenkintown who is 15 beers, 4 lines, and 2 divorces deep in the Jetro parking lot just feet away from a communal piss bucket. Warm ‘em up on what it’s like to win a Super Bowl for the first time in their lives and BOOM – mousetrap them with a question that will automatically garner a controversial response no matter how it’s answered. I’m not gonna lie, this is a pretty savvy move by Chelsea Handler and her cronies for their “Cause”. I’m not going to condone any soundbites that are absolutely coming from these Eagles fans, but I’m sure that Chelsea got EXACTLY what they wanted. Go America.

If she didn’t get hit by batteries that should at least be mentioned in the Netflix special. Because, you know, that’s what Philly fans do. They throw batteries all the time, every time.