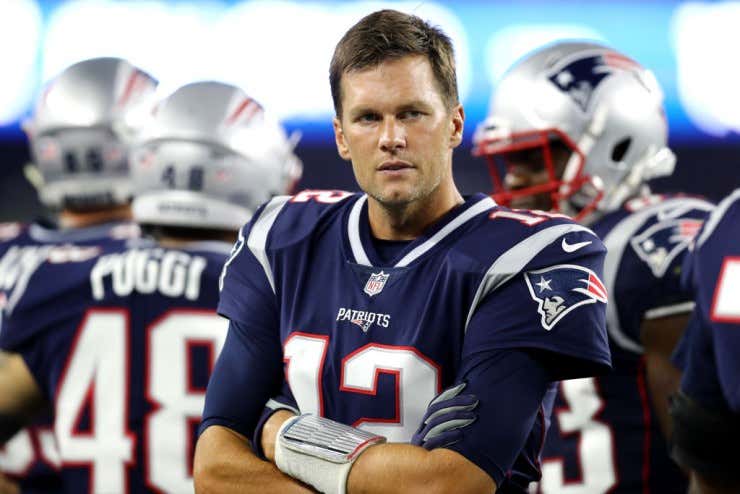 There, we stated the obvious, and no fiery hail rained down upon us. So it’s OK to say it out loud. Brady looked like a knuckleball pitcher in the Patriots’ stunning 34-10 upset loss to the Titans, and he didn’t have much of a fastball against the Packers or Bills in his last two games.

Long Brady passes now flutter out of bounds or bounce before they reach receivers. Short ones take too long to reach their targets, allowing defenders to swat them away. Passes toward the sideline arrive low and outside.

The Patriots offense has become a succession of touch passes over the middle, intricate screens and increasingly desperate trick plays. The Titans caught on, and other opponents are about to figure it out as well.

I don’t know how else to react to this. Other than to say, from the bottom of my heart, with all the heartfelt sincerity I can express in written words: Thank you.

I needed this. I’ve been in a dark place since that full diaper of a game yesterday. I started to slip into that mood where the End Times are here, all is lost, the rivers will run backwards and the dead will rise from the grave. In fairness to me, since 2003 the Patriots have averaged 3.5 losses per regular season. And that includes all those Decembers when they were locked into a playoff spot and just took a game-sized knee. So we’re not used to losing to .500 teams this late in the season. So when it happens, it feels like Footballmageddon. I’m sure we all went through the same thing when they lost to Miami in Week 14 last year. But that memory is lost to those playoff wins and another trip to the Super Bowl.

Anyway, when we hit a rut like this, there’s nothing that will slap the funk right out of my head like some good “It’s All Over” talk. That sweet, sweet sound of “Brady is done” and “He’s finally hit that cliff.” You know the cliff. The one we’ve been hearing about since Bernard Pollard took his knee out a decade ago.

Yup. Tom Brady looked bad yesterday. His receivers were not coming open fast enough for his protection to hold up. He dodged pressure and slid around the pocket and threw off the wrong foot. He missed on some throws low, missed on some throws high, and absolutely intentionally threw an undeterminable number of them away in an effort to not turn it over. And if you want to declare that this is the end of the line for him, to pull the sheet over his professional face and call it “Time of death: November 11, 2018,” I just want to be on record as saying “Bring it. Bring it the fuck on.”

There is no other quarterback like this, nor has their ever been. Where he can’t have a subpar game without everyone making the funeral arrangements. Aaron Rodgers puts up 17 against the Patriots and the national conversation is about how he has no help. Peyton Manning would go face down in a puddle of his own sick in a postseason loss and the Manning Apology Machine would double its output. Brady’s team stumbles on the road without Gronk and Sony Michel just coming back and he should’ve retired a year ago. I love it.

I mean, where was this talk when Brady was leading this offense to the third most points in the league? When they put up 38 on the Bears, Colts and Dolphins. When they dropped a 43 burger on the Chiefs, for Christ? Then it was crickets. Now it’s definitive proof that the guy who threw for 500 yards in the Super Bowl nine months ago is finished and his arm is a form of cooked pasta. And I needed it.

So again, thanks. Your grossly exaggerated negativity will be welcomed over two weeks of the bye and beyond. So by all means, keep it up. I need it. The Patriots need it. And Tom Brady, who has used the doubts of others as a kind of performance enhancing drug since he was behind Lloyd Carr’s son on the Michigan depth chart can certainly use it. Keep it coming.