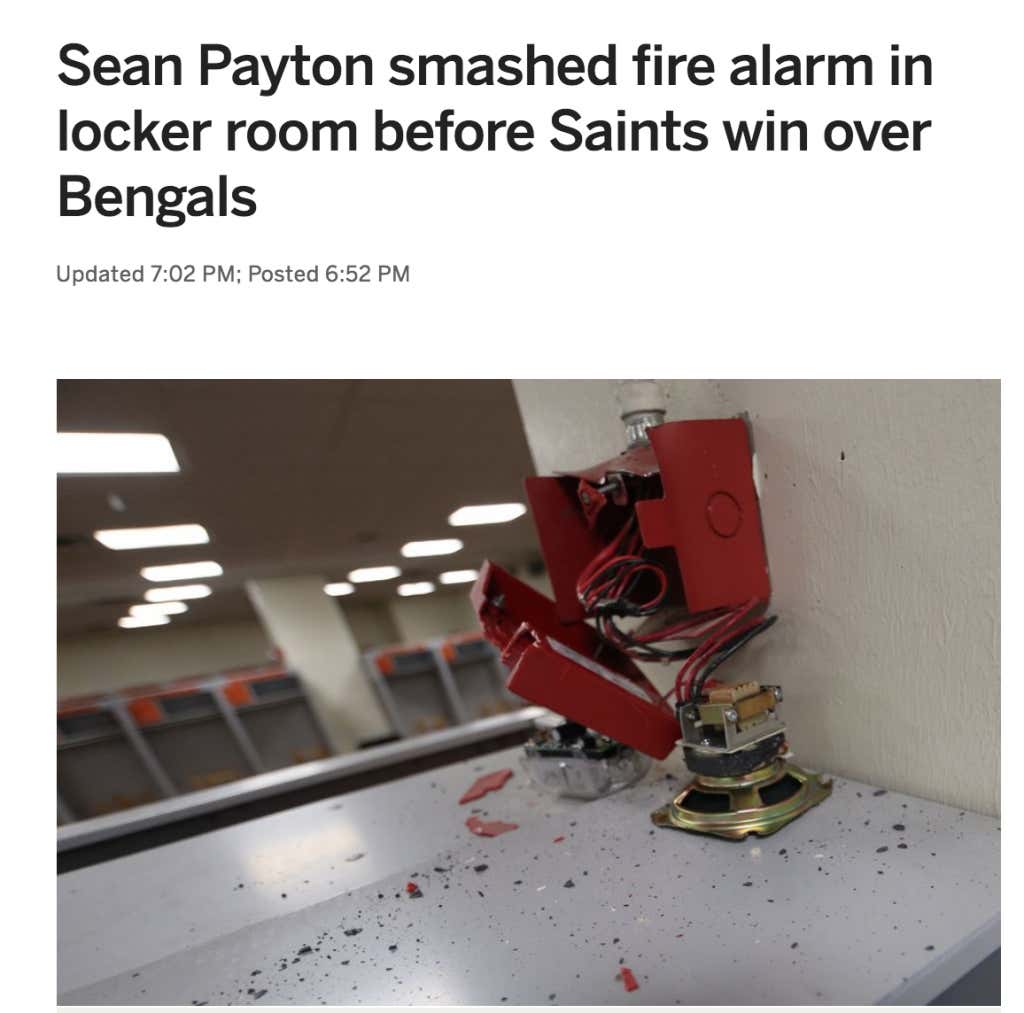 Sean Payton smashed the fire alarm as it was going off then instructed his payers to treat the game like it was a bank robbery. As my good freind Rick Reilly would say- between pulling the fire alarm and the dye packets from the bank this guy has more ink on his hands then a Octopus’s gynecologist folk’s.

But guess what- as people are rushing to condemn Sean Payton for destruction of property, the realty is his quick thinking might of saved lives. Hearing loss can occurr when noises exeed 90 decibels and most fire alarms are well above that. Hearing loss can make it more diffcult to win playoff games on the road, and make it more likely for players to not hear  Sheldon Browns footsteps approacing after catching a ball out of the backfield. On the other hand it also makes you more able to tune out the media rat poison being served to you when your being told how good you are. The fact is that Payton knows that firefighting resources are better served being sent to the west coast which you can donate to here btw. His quick thinking saved the citizens of Cincinatti thousands of dollars in a uneeded response from first reposnders whose time is more valuable extinguising flames inside the buttholes of Skyline chili customers.

Although he probably smashed the fire alarm because he clearly mistook it for the “sign a old injury prone free agent WR” button, hes fessed up and admitted to doing it and said he’d pay for the damage. And now Brandon Marshall is coming into town hoping to brake his career long streak of never playing in a playoff game and I think he can finaly do it. This is the big body red zone target that Taysom Hill needs to be a decoy while he instead chooses to put his chin in his own neck and run through 2 linebackers and a safety.

The Saints are playing there best football perhaps ever but more importantly I think it tells us something about what the NFL is trying to do to rosters with all there offense. Thomas Morestead didnt punt this week, and him along with Johnny Hekker out in LA have been collecting dust on the sidelines in a touching nod to Lawrence Taylor. But the fact is all the offenseive rule changes, and the hiring of dumbass coaches like Jason Garrett are leading to the ultmate destruction of the punting position as we know it which will mean one fewer roster spot and more money for the owners who are more football players then most punters because occasonally a owner gets a game ball.

Todd Bowles has not lost the lockeroom even though he shares it with another euqaly bad team every other week. Its time to ask if MetLife stadium is cursed or haunted by either the Tom Coughlin-shaped cloud of dust he left behind when he snubbed Mr Mara at his final press confrence, or by the ghost of Darren Rovells man-cave he so tragically lost in Hurricane Sandy.

Unfortunately for those out there who lack football IQ it might look like Bowles has been a massive disspointment this year but how can you blame is defense for losing to Matt Barkley since there wasnt any tape out there of him over the last two seasons.

Ten Things I Know I Know

2. Jon Gruden continues to insists that players are lining up dead or alive to play for the Raiders while Mark Davis has taken repsonsibilty for this seasons shortcomings. Employing a roster filled with dead guys might actualy improve the Raiders tackling since they’d force a few trips every now and again- plus you woudnt hear any of the discord coming out of Oakland if the guys were actualy dead. Dead men tell no tales, they keep everything in house.

3. The Panthers looked awful on Thursday and while its not suprising the a team whose motto is “keep pounding” struggles to adapt to no nut November, I expected a little more out of them.

4. Happy Veterans Day to anyone whose ever served in any branch of the miltary wether it be the War on terror, war on christmas, war on the war on football, or played Doom.

5. This is actualy a bad thing to do

Good coaches will teach you that screaming gives away the elment of suprise. During the D-Day invasion there’s a reason we invanded during a new moon and didn’t fill up half the boats with wolves who were all on there periods. My great-uncle was on one of those boats that hit the beach in France and I tell you what if the whole gang had been screaming “Omaha” the whole time like another former Colt they would of known exactly where they were landing.

6. While the rest of the NFC East is a landfill fire- a category 2 upgrade from the dumpster fire meme, The Washington Redskins put there fait in Alex Smiths tiny hands to guide them to the top of trash mountain. Its important to remember that its called a garbage can- not a garbage cannot, and Smiths steady leadership has Washington crusing to the playoffs.

Washington is a town of incumbants and the Redskins are no diffrent. Whoever gets the lead in Redskins games keeps it. They havent had a lead change all season in any of there games because sometimes you gotta go with the devil you know instead of the one you dont. The problem with some teams is they think that all there problems will be solved by trying to come back and win a game but then you have to comprimise your values and idenitity. The Redskins would rather lose playing exactly the way they are then win trying to be someone there not. Thats the difference. Other teams are posers and the Redskins are going to be themselves even if there losing instead of making “adjustments” aka flip-flopping.

Ha Ha Clinton Dix came out and said thanks to the Redskins fans who made it feel like a home enviroment in that there were the the exact same dozens of numbers of skins fans in attendence at Raymond James as at Raljon. Playing in front of a less then capacty crowd at home is a sneaky advantage for Washington because there are less scenarios players need to calculate for whose fantasy teams need which players to score in order to make them happy so they’re more free to focus on the playbook. Thats why the Chargers have been domnant as well despite playing in a soccer stadium half made up of Philip Rivers children.

7. Louisville fired Bobby Petrino, setting up a soon-to-be reunification with his former protege Lamar Jackson in Baltimore. But that leaves a hole for the Cardinals that can only be filled by one man and one man only- Greg Schiano. If you want a real culture change then you move on from Patrino to his polar opposite- a man whose so singularly passionate about football that he doesnt have time to put his penis anywhere except in a cereal bowl filled with icy-hot that he uses instead of coffee to wake himself up every day.

That is, if Cincinatti dosen’t get him first. The Bengals just fired Defensive Coordinator Teryl Austin and now have the opportunty to do the right thing with a DC who happsn to live just about a hour away with a track record of accountbility and excellence in Greg Schiano. Through some loophole in international governance, Greg Schiano possessing a Vontaze Burfict isnt looked upon in the same red alert apocolyptic fashion as Iran getting a nuke, or Palestine getting a flag.

8.  Cody Parkey hit the uprights 4 times in a row as a kicker which is by far the most impressive thing I’ve ever seen. I;ve long maintained that hitting the upright should be worth 4 points, but also the kick should be returnable if it doinks off and lands in the field of play. Also fire should shoot out the top of each upright. Randy Savage had better luck finishing drives hitting posts then this guy, but the good news is they were playing verse the Lions so leaving 12 points on the field is like if you accdntally drop some of your potato wedges when your eating at a Golden Corral. Plenty more points where that came from.

9. The Chargers find themselfs in a unusual position recently not having to dig themselves out of any holes they’ve created. Do these Chargers have it too easy? Rivers by there very nature take the past of least resistance as water finds its level. But Philip tends to pump his liquids through a series of tubes, uphill. Hes better when he sucks and I’m starting to think that getting off to a hot start was a misstake.

10. Peter King makes a great point that the Titans beating the Patriots isnt totaly out of the ordinary for a Bill Belchick disciple given that its happened 3 times in the past 10 years or about as often as they lose Superbowls. Mike ready willing and Vrabel knows from history that a group of castoff expatriats can write a hell of a storybook ending as the aging Captain Tom Brady The Old Man and the C is trying to haul one last catch back to the shore.

11. Runner up for Road Grader of the Week goes to Elvis- who many people are talking about more and more on the heels of his nomnation for a Presidential Medal of Freedom along with Babe Ruth. Some other canidates I’d like to see considered for the Nation’s highest civilian honor include:

-The dog from Something About Mary