The Houston Oilers stun the New England Patriots 26-23, scoring 26 unanswered points after spotting the Patriots the first 23 points at Schaefer Stadium in Foxboro. The game turned late in the second quarter when Stanley Morgan fumbled a punt. This helped set up the Oilers first score on an eight-yard run by Rob Carpenter. Houston carried the momentum into the second half, outscoring New England 19-0 to improve to 7-4 on the season.

The 1978 season began a new era in the NFL, as the schedule increased from 14 to 16 games, and a new round of postseason play was introduced with the Wild Card Game, with each conference now getting five teams into the playoffs. The Patriots coached by Chuck Fairbanks entered Week 11with a record of 8-2 overcoming the tragic injury to Darryl Stingley during the preseason to lead the AFC East. The Oilers led by Bum Phillips were 6-4 and chasing the Pittsburgh Steelers in the AFC Central.

The Patriots entered their game against the Oilers as a seven-point favorite. The Patriots got points with the first drive, as David Posey nailed a 32-yard field goal. The Oilers first drive stalled, as the Patriots continued to control the line of scrimmage driving down the field for another field goal by Posey from 34 yards. New England got the ball quickly as Rod Shoate recovered an Earl Campbell fumble at the Houston 35. Steve Grogan made it count with a 32-yard pass to Stanley Morgan, which set up Horace Ivory for a three-yard touchdown run. The Patriots were swarming up 13-0 in the second quarter when Johnnie Dirden fumbled the ensuing kickoff, which was recovered by Ray Costict at the 28. The Patriots were unable to advance the ball and settled for another 37-yard field goal by David Posey. Houston continued to have trouble hanging on to the ball as Tim Wilson fumbled it on the Patriots 41. New England would take full advantage this time Steve Grogan made it 23-0 with a seven-yard run. Everything was going in the Patriots favor, as they went three and out on the next drive. That’s when the game suddenly changed, as Stanley Morgan muffed a punt by Cliff Parsley, the muff was recovered by Ted Thompson. The Oilers would get on the scoreboard by the end of the first half on an eight-yard run by Rob Carpenter. 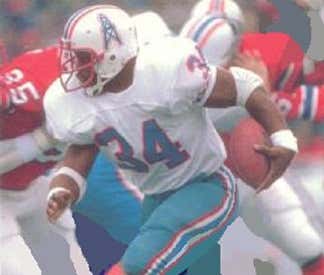 The Patriots looked to regain momentum as they set up Posey for a 38-yard field goal attempt which was no good at the end of the half. As the third quarter began, the Pats had a chance to add on to their lead after Steve Nelson intercepted Dan Pastorini. The Patriots would again settle for a field goal try by Posey that hit the upright giving Houston an unexpected reprieve. The Oilers would use a nice steady drive to continue their comeback, with Carpenter scoring his second touchdown of the game to make it 23-14. As the third quarter was coming to an end, the Oilers continued to take over as Willie Alexander picked off Steve Grogan setting up a fourth-quarter comeback for the Oilers. The Oilers cashed in the turnover with Campbell running the ball into the end zone from the one-yard line as the snap on the PAT was botched with the Patriots clinging to a 23-20 lead. The Patriots drove to midfield on the ensuing possession but were turned away, when Grogan’s fourth-down pass fell incomplete. The Oilers would drive 59 yards in ten plays to take a 26-23 lead on a ten-yard touchdown pass to Dan Pastorini to Rich Caster. Once again, the Oilers missed the PAT as Tom Fritsch’s kick sailed off course. Now trailing the Patriots looked to get back in front but failed as J.C. Wilson picked off Grogan to end the game.

A week after the Oilers amazing comeback in Foxboro, they hosted the Miami Dolphins in a pep rally filled Monday Night Game at the Astrodome, in which the Oilers debuted a fight song stealing from the Miami Dolphins fight song in a show of “Luv Ya Blue”. The Oilers won the game 35-30 and went on to post a record of 10-6. In the first AFC Wild Card Game, the Oilers beat Miami again 17-9 at the Orange Bowl. A week later they returned to Foxboro and beat the Patriots, who finished 11-5 in the Divisional Round 31-14. The Oilers run would come to an end with a 34-5 loss to Pittsburgh Steelers in the AFC Championship.