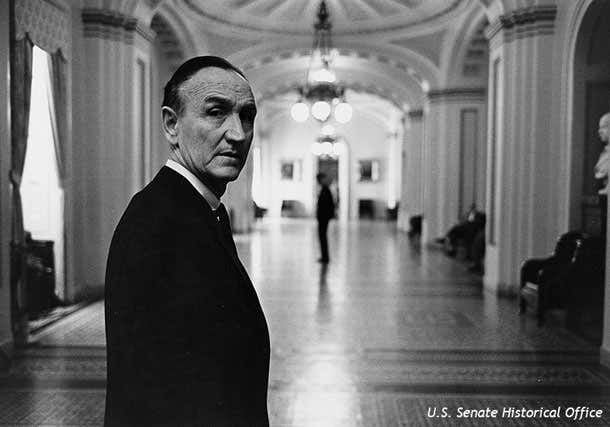 The last three days have included the 243rd birthday of the United States Marine Corps, the 100th anniversary of Armistice Day, which marked the official end of the First World War, and Veteran’s Day, which officially observed today. I could spend all day writing separate posts about each of them and not come anywhere close to doing any of them the justice they deserve. So instead, let me try to combine them all into the story of one man, Mike Mansfield.

If you don’t know who he was, let me give you a brief biography of him and what he meant to his country.

Mansfield was born in Montana. And when the United States entered World War I, he wanted to serve his country so he enlisted in the Navy and was shipped to off to Europe. But before he arrived, he was summarily given his Dishonorable Discharge, for lying. Specifically, for lying to his commanding officers and the War Department about his age. He told them he was an adult when he was, in fact, only 14.

When he was old enough to serve, he enlisted again, this time in the Marines, where he served his full two year commitment.

When his enlistment was up, Mansfield returned to Montana, worked in the copper mines shoveling ore and waste for eight years. He never attended high school but he did get himself into the University of Montana by taking high school classes before earning his degree.

After graduation, he ran for office and on his second try got elected to Co,ngress.

He later got elected to the Senate and eventually became House Majority Leader. He held that post for 16 years, longer than anyone else ever has.

After retiring, he was named U.S. Ambassador to Japan. He held that post for 12 years, also longer than anyone else ever has.

–Mansfield delivered the eulogy for JFK as he lay in state at the Capitol rotunda.

–An outspoken critic of racism and Jim Crow laws, he worked with Lyndon Johnson, a Democrat, to get Civil Rights laws passed.

–An outspoken critic of the Vietnam War, he worked with Richard Nixon, a Republican, to get U.S. troops withdrawn.

Mike Mansfield died in 2001 at the age of 98. And, in accordance with his wishes, he was laid to rest with this memorial. Carefully worded to sum up his singular, extraordinary life of accomplishments, worldwide acclaim, universal respect and public service for eternity. 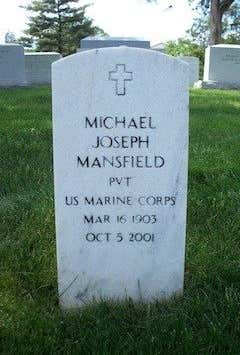 Please just remember Pvt. Mansfield and the millions of Americans who have gone above and beyond in their call to duty. And keep him in mind the next time someone is going on about some politician they love and remind them what real service to your country is all about.

Here’s wishing a great Veteran’s Day to all who have worn the uniform. And Semper Fi, Marine.