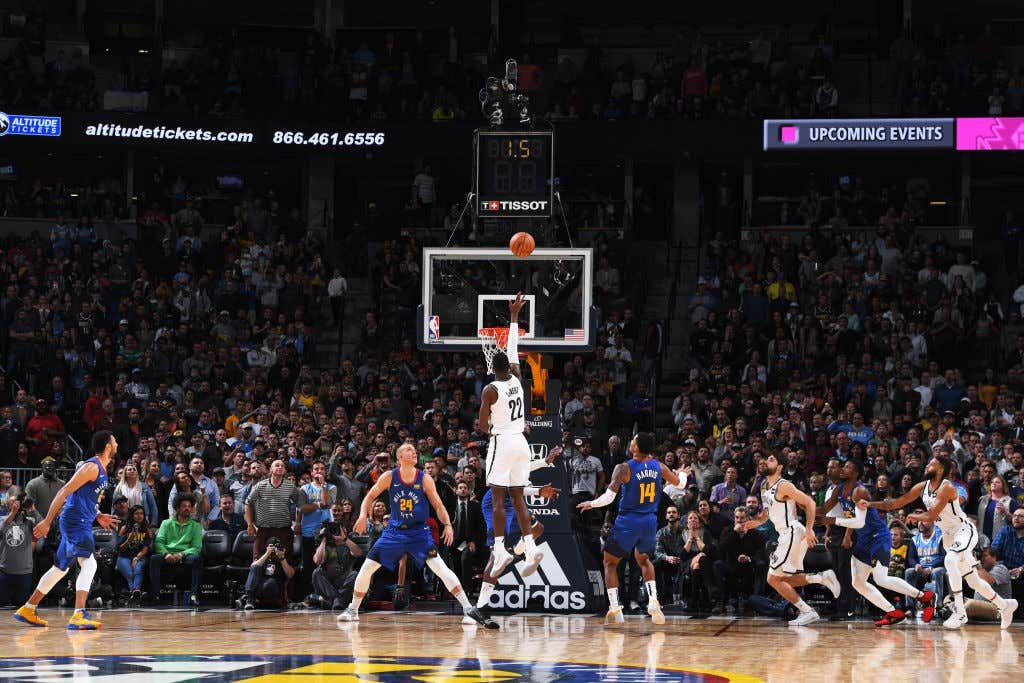 Good morning everybody happy Saturday and welcome to another edition of Last Night In The NBA where we bring you up to speed on everything that happened last night in the Association. It was a busy Friday night with 7 games on the schedule and I’ll have you know if you did something fun like go out to the bar or whatever, you missed a fun night of hoops. There was a revenge game, some upsets, some disasters, some thrillers, all in all another quality night everywhere you looked. You’re probably hung over to some degree at the moment which is why this is my favorite blog of the week to write. Let me help you get back to neutral by showing you a bunch of basketball highlights you can mindlessly watch on the toilet. If this sounds like you, keep reading because here’s what you missed

I don’t know if this is rock bottom for the Wizards, but we’re getting pretty damn close. Now 1-6 on the road, and losers of 7 of their last 8 with that only win coming over NYK, times are certainly tough in the nation’s capital. I guess maybe there was some thought that when Dwight came back maybe that would help some, but really it’s been more of the same with this team. Yeah, Wall/Beal continue to lead the way

but the problem continues to be their defense, or lack thereof. They gave up 63 points in the first half, never held ORL to a quarter under 26 points, and the result was a game where they essentially trailed the entire way. I would say it’s time to blow it up and trade pieces, but their contracts are so bad how could they possibly? No one wants to pay John Wall $46M or whatever he’s about to get. Nobody wants that Otto Porter Jr money. They’re kinda stuck at the moment and I’m not so sure that’s a great spot.

For ORL, listen rag on them all they want, but this team plays hard. They shot 51% for the game, had 7 players in double figures and no doubt absolutely controlled this game

Three of their five wins have now come at home, so while they’ll probably still make the lottery, they have shown this season that they aren’t really a team you can look past. When you’re in a rebuild, that’s an important step. Make teams take you somewhat seriously, which the Magic have done in my opinion.

Give the Sixers credit, they simply refuse to lose at home. One of the better games of the night, this was a heavy weight fight with each team throwing blow after blow. As you can  imagine, the story here was Joel Embiid/Simmons

Listen you may hate the Sixers, you may like to joke about them on the internet, but one thing you have to admit is a healthy Joel Embiid, which is what we have right now, is one of the most unstoppable forces this league has. That’s just the truth whether you want to admit it or not

What you love about Embiid is he talks shit and then he backs it up. The biggest question for him was always his health, and that looks to be a thing of the past so Sixers fans have every right to puff their chest out when it comes to Embiid’s dominance. Fultz is a disaster and Simmons still can’t shoot which will hurt them come playoffs, but forget about that for a second and just appreciate the work of a man that is ridiculously impressive.

Oh and JJ Redick had 17 off the bench as he continues to be so solid this season.

For CHA, it was a struggle for them shooting the ball in this game, just 39%, but they were awesome taking care of the basketball with 4 TOs, got a good night from their bench that had four players in double figures, and of course, there was Kemba

Kemba willed this team into OT essentially all by himself. He and Kyle Lowry have been the best guards in the East to start the season, and this dude is playing his way into max money or close to it. The Hornets continue to be feisty, and to me they have the look of a team that is going to crack the top 8 when it’s all said and done.

Ahh the Gordon Hayward return. It finally happened and we’ll cover everything from the Celtics side in a minute, so now let’s just focus on the Jazz. A game they probably felt like they had to win given everything that happened, they came out and punched the Celtics right in the mouth. Joe Ingles had a career night with 27 points on 10-14 shooting

he was virtually unstoppable in that first half, they shot a ridiculous 55.8% for the game, and even someone like Ricky Rubio, a guy that shoots 31/28% came out and put up 17/6/7 on 7-13 shooting. When it came time to closing time Donovan Mitchell took care of that by getting to the line at will with his 13 FTA, and then there was former Celtic Jae Crowder. You think he enjoyed this?

They boo’ed Hayward whenever he got the ball which was expected, and he was iffy at best so Jazz fans can have their moment in the sun with that too. They nearly blew it in that fourth quarter, but poor shot selection by the Celtics helped them avoid disaster of blowing a 20 point lead. They now move to 2-4 on the year at home, and this offensive performance tied their third highest total of the season.

I don’t think anyone is all that surprised by this result, everyone knows the Pistons are better than the Hawks. They dropped 40 in the first quarter and had a 20 point lead and that was that. What was impressive was they did this all with Blake going 2-10 from the field. He did do a little bit of everything though to make up for his lack of scoring

With that lack of scoring, that just meant someone else was going to have to step in and fill that role. There are many candidates to choose from for that role, but wouldn’t you know it was Stanley Johnson who rose to that challenge

This is now a couple wins in the row for DET after their 5 game losing streak, but things don’t get all that easy with CHA coming up next.

For ATL, like always, you just care about Trae Young, so here you do

Another game that was pretty entertaining throughout. Both teams were great shooting the ball, but also couldn’t stop turning it over. A combined 41 TOs for both teams, that’s bad. But thankfully the Pacers were able to pull it out mostly because of the work done by Victor Oladipo and his 22/5/10/4

Sabonis continues to be such a factor for this team off the bench with another 17/11 on 6-7 shooting and it almost makes no sense the run he is on. I mean look at this!

For a team that went just 7-20 from deep and 17-29 from the FT line, you could argue the Pacers got a little lucky here but they’re now 5-2 on the road and every bit legit as we thought they may be coming into the year.

For MIA, it’s crazy what a difference an engaged Hassan Whiteside makes isn’t it? He’s been great to start the year and last night was no exception

This is a team that also missed a shit ton of FTs (16-27) and turned it over 23 times so maybe they are the lucky ones that they even still had a punching chance. Things got a little away from them in the second half where they had a combined 43 points, but hey at least my dude Kelly Olynyk looked great off the bench!

Can you feel it? The tide is slowly turning in BKN. This is no longer a laughingstock of a team and a franchise, and they deserve a lot of credit for finally getting to this point after being shitty for so long. They got great performances from guys like Jarrett Allen who had 18/9 with 5 blocks, D’Angelo Russell was solid with 23/4/5

and then when it came down to win the game in a building where the opposition had not lost, they turned to their best player Caris LeVert (17/5), and boy did he come through

I think it’s fair to say LeVert is having a breakout year this season and should absolutely be in the MIP conversation. The Nets are another one of those teams you no longer can just laugh at and look over when you see them on your schedule. They play hard and can beat the best of the best on any given night.

For DEN, rough night for Gary Harris who went 1-11 and Jamal Murray who went 5-14. Not often those two both struggle at the same time. The good news for Nuggets fans in this one though was finally Jokic took more than 1 FGA. He was a beast

I also don’t think this loss really changes anything in regards to the Nuggets. They are still one of the three best teams in the West right now.

Wait….are the Kings good or does MIN just really suck? Maybe a little bit of both, but man is it fun to see the Baby Kings play well

All five starters had at least 14 points, they shot 45/37% from the field and after losing the first quarter 31-29, they did not lose another quarter the rest of the way. I know people are hesitant to believe in this team, but I’m not trying to tell you they are going to make the playoffs, I’m just saying the Kings can no longer be talked about as one of the biggest jokes in the league. Their young talent is good, and is for real.

For MIN, now 0-8 on that road, and that’s pretty impressive. Some may say not having Jimmy Butler at times is the reason for their struggles……but

The good news though is both KAT and DRose looked great

but let’s not pretend like things still aren’t a complete disaster right now in MIN.

And that’s it! You’re now all caught up on everything that went down last night in the NBA. We’re back tonight with 10 more games so pretty much a full slate. Enjoy the day of football if you want, just make sure to check back tomorrow so I can fill you in on what you missed.