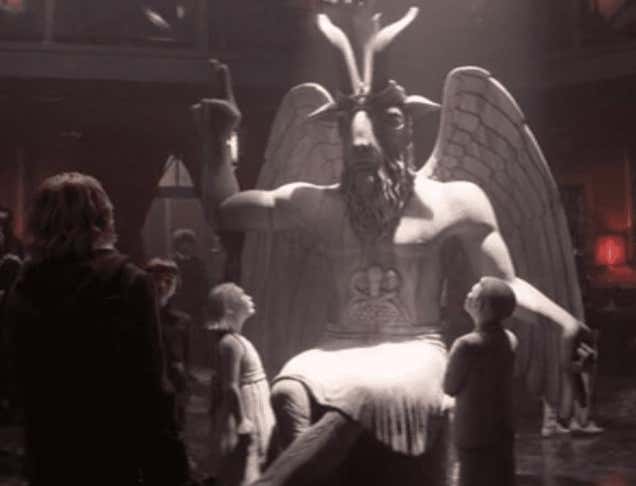 Variety- The Satanic Temple made good on its threat to sue Netflix and Warner Bros. on Thursday, filing a $50 million copyright suit accusing them of ripping off the temple’s statue of Baphomet to fuel “Satanic panic” in the Netflix series “The Chilling Adventures of Sabrina.”

The lawsuit… alleges that four episodes of the show feature a Baphomet statue that bears a striking resemblance to the one created by the temple.

The statue features two children looking up in awe at a goat-headed man-beast.

I’m simultaneously fascinated and terrified by worshippers of the Dark Lord. (I capitalize to hedge my bets, not because I worship Him myself. Fuck, maybe I’m sending myself to hell. But then he’ll be glad I honored Him with capitalization. So maybe, as Jim Jefferies said, I’ll be his boy and he’ll give me a ticket to the buffet.) I started researching this particular subset of Satan worshippers. Turns out, they’re a lot less scary than you might think!

Everyone gets a picture ON the statue, not just with it in the background:

It’s a massive assumption, but it appears they are LBGTQ friendly:

I spat out my bat blood and it’s extremely expensive when I read the comment “very cute happy birthday hail Satan.” Also, I give that body 3.2 balls.

They encourage civic engagement! Whereas many Christian churches will do a food drive, the Satanic Temple did a tampon drive for their “Menstruatin’ with Satan” campaign:

They love getting into the holiday spirit!

If you can’t laugh at that picture, you’re dead inside. But not in a good way.

They have Satan-themed yoga classes:

They even organize family-friendly beach outings!

Looks like a goddamn party to me, and I didn’t even show you the mugs they have for sale (no free ads, right God?!) So here’s wishing them luck in their lawsuit against Netflix. I’m fairly sure they can pay the speeding ticket. And uh, good luck with everything else guys. Next time I find myself in complete darkness, I’ll think of you.