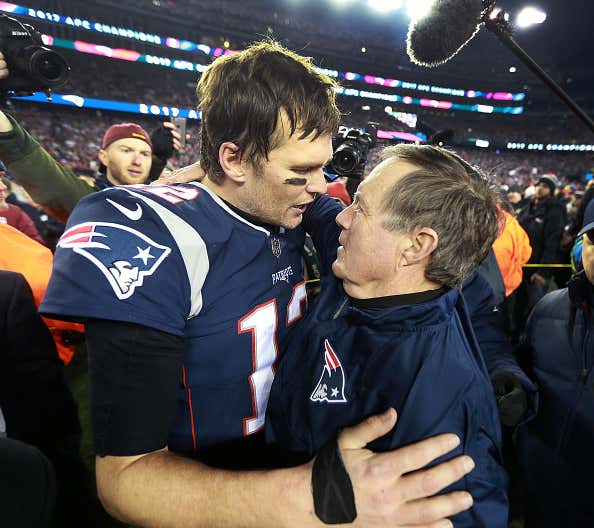 Boston Magazine – The New England Patriots have redefined the phrase “sports dynasty,” winning at a clip over the past 17 years unmatched in the history of North American sports.

And quarterback Tom Brady, not head coach Bill Belichick, is the indispensable cog in that relentless victory machine. …

[I]f the question is “who is more important to New England’s success, the coach or the quarterback?” – well, the answer is obvious. …

The Patriots were a bad team who instantly became a Super Bowl champion and a dynasty. Brady was the only difference in 2001.

Belichick had coached 100 games in his career up until Brady’s first start. Belichick’s record in those 100 games? Just 42-58 (including 1-1 in postseason). That’s a .420 career winning percentage for those of you keeping score at home. And it’s .420 over 100 games, a statistically significant sample of games. One hundred games make a complete career for most coaches.

Belichick was a great defensive coordinator who struggled as a head coach. Then Mo Lewis hit Bledsoe. Then Brady trotted on the field. Then Belichick became a great head coach.

Who made whom? The numbers don’t lie. Brady made Belichick.

I love this debate, I honestly do. Because to me it’s like one of those religious discussions theologians have that don’t definitively have a right or a wrong. Like debating where God would be without Jesus vs. where Jesus would be without God. No matter which side you come down on, you still walk away a winner.

And believe me, I get asked this a lot in one form or another. Either “Who do you think deserves more of the credit?” or “If you had to choose one who would it be?” And while I concede those are tough questions because theirs is a symbiotic relationship that works to near perfection as it is, a dynastic Yin-Yang of success that shits Lombardi trophies, if I’m forced to choose, my answer is always the same.

I’m on Team Belichick. I think most Patriots fans feel the same, even while we have “Organ Donor for Tom Brady Only” stamped on our driver’s licenses.

The numbers here, while accurate, don’t tell the whole story. Yes, Belichick’s career record was under .500 before Mo Lewis’s hit on Bledsoe changed the world forever. But to reduce his time in Cleveland into just W-L is to ignore what he had done there before he had his nuts chopped off by Art Modell. When he left the Giants to take over the Browns in 1991, the franchise was in free fall. They’d gone 3-13 the year before and had had three coaches in three seasons. In his first three seasons he won 6, 7 and 7 games before going 11-5 and beating Bill Parcells Patriots in the Wild Card round in 1994.

More importantly, Belichick had established something. Something that was poised to be lasting.  His coaching staff was basically a Jedi Council of talent that would be running pro and DI programs for a generation. He had stockpiled future draft assets. And that’s when Modell announced in the middle of the season that he was moving the Browns to Baltimore. And they imploded. And Belichick was fired. Thanks entirely to forces beyond his control. But the foundation he had laid for that organization ended up becoming the 2000 Ravens Super Bowl winner. Including the 1st round pick he’d acquired but never got to use. Instead Ozzie Newsome, the executive Belichick had hired and mentored, got to use it. On Ray Lewis. (You’re welcome, Modell.) If you want to count that W-L record against him, you’re factually accurate but totally missing the big picture.

As you are when you bring up Belichick’s 5-11 in 2000. In coming to New England, he’d inherited a team that not only had suffered a talent drain thanks to years of terrible drafts, free agent losses and horrendous contracts that put the franchise in Maximum Security Salary Cap Jail. GM Bobby Grier had been handing out guaranteed money like it was Halloween candy. Such that Belichick and Scott Pioli were cutting guys without freeing up any money against the cap. And having to somehow replace them with better players without paying them much. Eventually he said he made it under the cap “by about $40.” Not to mention he had to change the culture after three years of Pete Carroll running the place like it was Sunnyside Day Care. Yes, that 5-11 is on him. Just like Parcells’ first year 5-11 is on him. But unlike that Bill, this Bill didn’t throw a 6-10 stinker in there a couple of seasons later. He started winning and never stopped.

Yes, that is in large part thanks to Brady. I’m not going to sit here and argue that if the sainted QB coach, the late, great Dick Rehbein, hadn’t spoken up in the War Room in 2000 and asked for the gangly, slow-footed kid from Michigan that Belichick would’ve taken the Pats to eight Super Bowls with Todd Husak or Tim Rattay. But at the same time, if Brady had come off the board earlier to say, Buffalo, Jacksonville or Arizona, that he’d be a Hall of Famer? I’m not sure he ever makes it off some other team’s bench. All we can do is speculate. And look at Belichick’s admittedly limited record without Brady.

If you give Game 1 of 2008 to Matt Cassel, which I do since Brady started but was tragically lost for the season on the opening drive, here are the numbers which are much more relevant than what he did with Bernie Kosar during the Clinton Administration:

By way of perspective, .700 would be the 5th highest winning percentage by a coach in NFL history. And you have to go back to John Madden, who retired in 1978, to find a higher one.

I love the argument. I take a back seat to no one when it comes to loving Brady. But Kiss the Rings.