I had a weird day yesterday.

I almost shit my pants and a then a stranger got to see me naked.

By the way…  I said a stranger “got” to see me naked as if it was some kind of bonus.  Like I “got” a great prize at the bottom of a Cracker Jack box, or I “got” genital warts from some random stripper.

Anyhoo…  I did morning radio from 7-9AM yesterday.  Solid show.  Really helped actually having access to the internet for the first time in 2 days.  Towards the end of the show, I felt a tad gassy, but the studio is close quarters and I am deathly afraid my co-host, so I clenched-up and held in all emissions until our time was done.

Those Kegels I’ve been doing have really paid off.

For people not familiar with the Barstool office, this office is fucking disgusting.  So if I can’t use the home field before I drive in, then I often go to a nearby hotel and pretend I am staying there in order to use their lobby bathroom.

As a result, I am getting very familiar with the hotels in Nomad… So if anyone visiting the city needs a hotel recommendation within a 5 block radius of Barstool HQ, just hit me up, and I will hook you up.

Moving on…  I went to the lovely Hotel James, or perhaps The James Hotel (I never really pondered which one it was until now).  Reason being, the James‘ men’s room has actual water closets, and I like the private intimacy that shitting in a closet provides.  I also like this specific joint because they offer citrus water on the main floor, so sometimes I can be found post-dump sitting on one of their lobby couches, enjoying a beverage, and checking social media… All in the glow of a successful bowel movement.

I realize mentioning the specifics of my routine potentially shines a spotlight on me for hotel security, but the staff there seems more like a Deadspin crowd, tbh.  Plus, they say any press is good press, and I am giving their place a free plug (which I am also going to YELP)- The Hotel James/James Hotel is spotless and well run.  I can only assume the rooms are spacious and the beds are comfy because even though I have never left the lobby, the actual guests all seem well-rested and satisfied with their stays.

I give it 4.5 stars out of 5… That missing half star is for their utter lack of bathroom security, obviously.

Moving on…  I rushed to my favorite WC in the bottom floor of the James.  I quickly stripped naked and hung my clothes on the hook the hotel graciously provides on the inside of every Water Closet door.  And then I sat down and proceeded to drop some fucking wolf-bait.

This was all on a Wednesday morning and the night before I had taken the family out for ramen at a local joint.  I can’t really pinpoint the exact culprit from that meal, but I had the devil inside of me, and the resulting bowel movement that following morning quickly turned into something more of a painful and obscenity-laced exorcism.

At one point, I uttered…

Moving on…  I realized I casually mentioned that I “quickly stripped naked” a couple paragraphs above, but for those who don’t know me, I should mention that I am only comfortable shitting in the nude.

I am not sure why, but that’s just the way it is.

I have had countless arguments about this practice throughout the years.  Some people have leapt to my defense, and some people have ridiculed me profusely.  Either way, if I am in a private bathroom (not semi-exposed stall), I strip down to my shoes (never barefoot, obviously).

I even take my watch and wedding ring off.  If there is no ledge to hold them, I tuck my watch into the pocket of my pants, and I tuck my ring beneath the fat fold of my left tit (near my heart… “I love you, Honey!”).

So if you were a fly on the wall in a bathroom that I was destroying, you would see nothing but a mound of pale sweaty skin hunched over, staring at its phone, wearing nothing but eyeglasses and shoes.

Moving on… I am now naked and afraid, fully dilated, and dropping heat in the hotel.  After I am done, I just kind of sit back on the toilet.  I am fully wiped and flushed, but utterly exhausted.

I put my phone down on my knee and I just lean all the way back, so my head rests against the wall while the cold of the exposed plumbing behind me ices down my lower back.

Before I close my eyes to ponder life I hear someone else enter the bathroom, and I casually look forward at my own closed door as he is passing, and that is when I noticed something.

In my harried rush to disrobe and unload, I had forgotten one critical thing.

I never locked the door to the fucking stall.

I gasped like a bitch at the exact moment this unsuspecting stranger grabbed the handle to my lair, and in the split second it took for him to open and look in, I uttered out a high pitch scream of “OCCUPADO!”… Which I believe is the Spanish word for “occupied.”

Why the fuck did I choose to speak Spanish here?… Life is strange.

Either way, it was too late, the guy essentially looked into the Ark of the Covenant.  He took a stunned step back and slammed my door closed saying, “I’m so sorry.”

But he shouldn’t be sorry… This was all my fucking fault.

There was a latch that when properly flipped would’ve given him a clear message of “IN USE” above the handle in block red letters.  Instead, this poor bastard saw only block green letters that said “AVAILABLE“, and now he was innocently backstepping towards the next stall saying. “I’m so sorry.”, but really meaning, “I’m so confused/nauseous.”

It really shouldn’t make a difference, but I think it is worth noting that the man was also Middle Eastern and yesterday was the Hindu holiday of Diwali.

Diwali is their “festival of lights”, which is celebrated every autumn in the northern hemisphere. One of the most popular festivals of Hinduism, Diwali symbolizes the spiritual “victory of light over darkness, good over evil and knowledge over ignorance.”

Well, it also represents the fact that no matter what a doorknob says, you should always fucking knock on a public bathroom stall door.  Otherwise, you may be greeted with a figure who strangely resembles a reclining Ganesha. 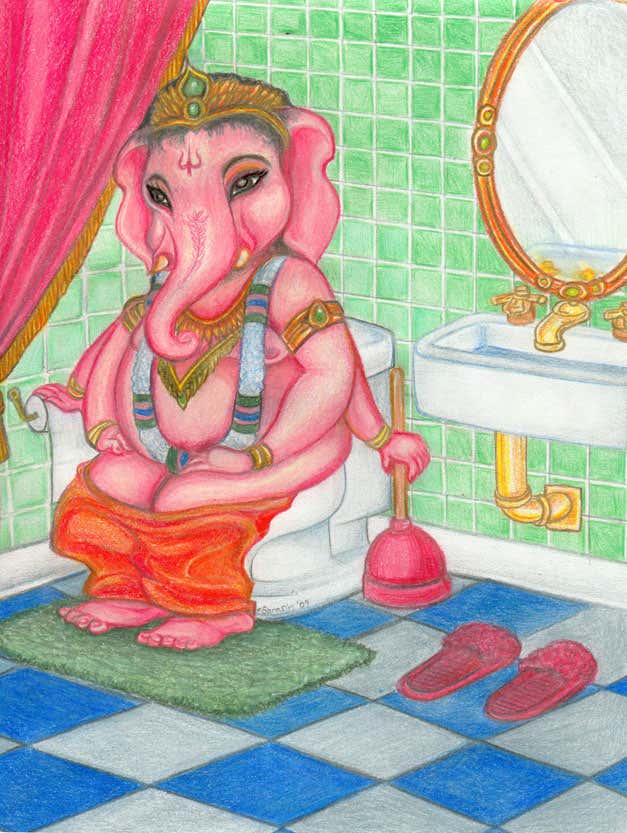 I hope to never see you again, strange man, and I am sorry you had to see that.  Happy Diwali, nonetheless… Hopefully, your light will somehow claim victory over my darkness.

Moving on… After “the incident” I was pretty embarrassed and frazzled, and I didn’t pay attention to what was going on outside of my stall as I rushed to put my clothes back on.

As I was buttoning the top button on my shirt, I had a small revelation- What if I come out of this closet now, and the guy who saw my goodies happens to be finishing up wherever he is also?

Do I really want to see the man who has seen me at my most vulnerable?

The answer was a resounding, “No!”, so I decided to wait it out.

I didn’t feel comfortable sitting back down because of the crime scene I just recently created in the bowl below, and I didn’t feel right stripping down again in order to feel comfy taking a seat.

So I just stood there… Alone… Ashamed… Fully clothed… For about 20 minutes, until I was absolutely sure the coast was clear, and then I ran out of the hotel, stopping only briefly for a refreshing glass of citrus water.

When I got back to the office, the only person who noticed I was gone for almost an hour was Pat, who produces/co-hosts the Barstool Breakfast show.  And since we have talked about my hotel visits before on the air, Pat quickly said, “That must’ve been some hotel dump, Large.”

I leaned over sheepishly towards him and whispered, “Patty… It was a lot more than that.  I just wound up exposing myself to some Middle Eastern guy in a public men’s room.”

To which Patty replied, “Oh, man… I’ve been there before… Fucking brutal.”