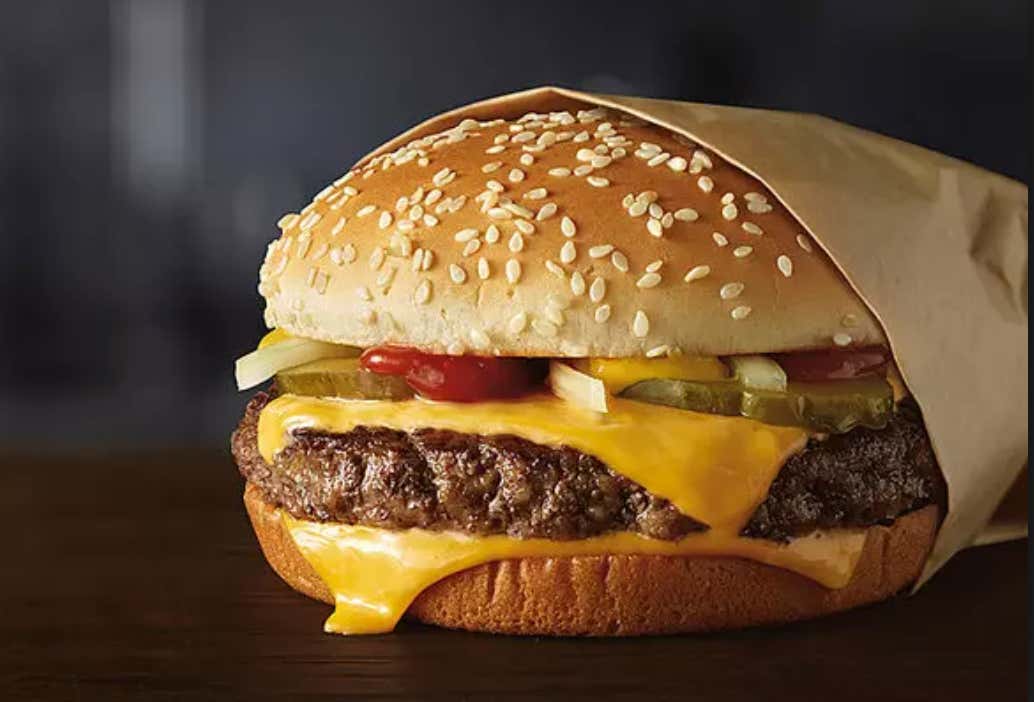 NY POST - A $5 million lawsuit brought by two McDonald’s customers in Florida was thrown out last week by US District Judge William Dimitrouleas, granting a motion filed by McDonald’s.

Dimitrouleas dismissed the lawsuit last Friday “with prejudice,” the Miami Herald reported, meaning the plaintiffs are not allowed to file the lawsuit again at a later date.

In May, the South Florida couple, Cynthia Kissner and Leonard Werner, filed the suit, complaining they had been charged the full price for a Quarter Pounder with Cheese, even though they requested the burger not have cheese.

Kissner and Werner argued that hamburgers and cheeseburgers are different prices on the McDonald’s menu, but when they order a Quarter Pounder without the extra dairy, they’re still forced to pay the same amount.

I don’t know what it’s going to take to bring attention and awareness – and most importantly, action – to our corrupt legal system.  I mean how clear does it need to be?  Do we need to literally beat you over the head with it?  Our judges have turned into the same judges as the Colombians during the Pablo Escobar era.  On the take.  Lining their pockets with bribe money.  You tell me how else this judge dismisses a lawsuit over cheese on a quarter pounder when the customer CLEARLY STATED NO CHEESE.  Maybe she was lactose intolerant.  All she was asking was $5 million for her night full of diarrhea.  Maybe she was staying over Leonard’s house that night and blew up his entire bathroom.  The embarrassment alone is worth like 4 of that million.  Maybe she even had to hire a housekeeper off Cleanly to come in and clean the toilet smears off, a service that is exorbitantly priced.  Maybe she had to turtle walk 3 blocks to CVS to buy an extra large Pepto and a 12 pack of Immodium, and the self-checkout wasn’t working, because the little silver tray was telling you it had the incorrect weight on it, requiring the cashier to come over and swipe it away with their key card, when they noticed what you were buying and gave you that look like – you got diarrhea huh.  Humiliation after humiliation.

And Judge Dimitrouleas doesn’t even care!  All his poops are solid one-wipers.  Doesn’t understand the pain from your legs falling asleep from being perched on the ceramic for a full hour, the inconvenience of waving your arms around like one of those inflatable guys at the car dealership to get the motion sensor light back on.

The subsequent clog from the baby wipes and the distinct embarrassing smell of Febreze mixed with shit.  I mean what else could the “injury” be?  Mental health is just as important as physical.

Despite the couple’s claims of having “suffered injury as a result of their purchases because they were overcharged,” the judge did not feel the plaintiffs proved being harmed by having to pay more.

And of course – he has no concept of money, since he’s taking cash under the table every day of his life to influence court rulings.

According to the lawsuit, McDonald’s used to sell four different Quarter Pounder options, two of which came without cheese and cost between 30 and 90 cents less, the Miami Herald reported. However, “at some point,” the fast food chain stopped selling the different variations and currently only lists the one Quarter Pounder with Cheese on the menu.

“McDonald’s is being unjustly enriched by these practices because it receives payment for cheese it does not deliver to its customers,” the lawsuit states.

And if that motherfucker has fucking cheese on it so help me God.