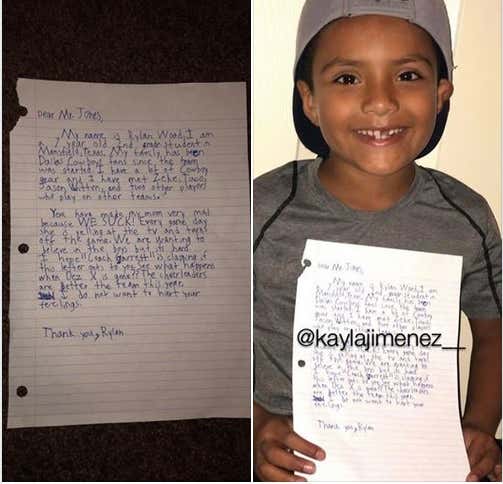 Source – With a 3-5 record, it’s safe to say that Dallas Cowboys fans aren’t happy right now with how the season is turning out for America’s team.

That dissatisfaction doesn’t discriminate, even if you’re just 7-years-old. Ask Rylan Wood, he’s a 2nd grader from Mansfield, who isn’t very happy with the team he’s rooted for all his life. …

On Monday, as Wood and his mom were watching the Cowboys lose to the Titans during primetime, he vowed to do something if the ‘Boys didn’t pull off a win. Spoilers…they didn’t.

“He told me if the Cowboys lose, I really want to write a letter,” his mother, Kayla Jimenez, said.  … The handwriting is a little squiggly and Jimenez helped with the spelling of some words, but the finished product is simply too funny.

My name is Rylan Wood. I am a 7-year-old 2nd grade student in Mansfield, Texas. My family has been Dallas Cowboys fans since the team was started. I have a lot of Cowboy gear and I have met ‘Zeke, Taco, Jason Witten and two other players who play on other teams.

You have made my mom very mad because WE SUCK! Every game day she is yelling at the TV and turns off the game. We are wanting to believe in the boys but its hard. I hope “Coach Garrett” is clapping if this letter gets to you. See what happens when Dez X is gone?? The cheerleaders are better than the team this year. I do not want to hurt your feelings.

Let’s begin by addressing the elephant in the room by admitting Rylan Wood no more wrote that letter than my 4th grader did his own Science Fair project about “What Makes a Baseball Curve?” I’m sure like my kid, Rylan was more or less in the room, absentmindedly watching Nickelodeon while his mom did all the work. For starters, 7-year-olds are not inspired to “write letters.” They might be vaguely aware there was once a form of communication known as letters, but most of their human interaction is done via Fortnite. Your average 2nd grader probably Snapchats his list to Santa for all I know. He might have asked his mother how to text the Cowboys, but that kid hasn’t seen a “letter” since the last time he watched a rerun of Blues Clues.

That said, I appreciate the sentiment contained within. I don’t doubt that it expresses the feelings of poor Rylan and Kayla perfectly. I know, because I lived it. Being emotionally attached to a failed franchise that has been beaten down since before you were even born will scar a young mind without the maturity to process it. Having a doddering fool running the ship in circles is hard on even the most developed brain. Been there. Suffered that.

I’m sure at one point when I was 7 it crossed my mind to write a letter to Billy Sullivan saying “WE SUCK!” But back then our parents were preoccupied with their own shit like running the house and earning a living and not so much into stunts to make their grade schoolers internet famous for a couple of days. Plus I’m the youngest of five so I was pretty much raised like a free range chicken. If I’d told my mother I wanted to write a letter to the Patriots, she would’ve said “That’s nice,” and gone back to having Screwdrivers with my aunts while I immediately lost interest and went back to annoying my brothers with my Brady Bunch impressions. Like a normal family.

Still, thoughts and prayers to the Wood/Jimenez family. All I can tell them is, it gets better. Maybe. Possibly. Not always. And in the Cowboys case, it’s for sure not getting better right away.