Some older folks seem to have a penchant for collecting sugar packets, free pens, Werther’s candies & obliviously offensive phrases. At 70 years old Taiwan’s Chen San Yuan has other ideas… With a full body rig of cell phones (& a bike that can hold even more) he roams the streets collecting all the creatures from Pokemon Go!

The Taiwanese man, affectionately known as Uncle Pokemon, learnt about the game from his grandson, and can play up to 20 hours straight before he runs out of battery power for his devices.

So this kid introduced his grandpa to Pokemon & proceeded to watch all of his inheritance go to Charmanders & Snafblats instead. Brutal.

San Yuan believes playing the game so often helps keep him sharp against Alzheimer’s disease & he enjoys the friends he makes along his way. That part I really like, and hearing he’s out until 4am sometimes is a little scary but at that point in life I suppose you can do whatever the hell you want.

Maybe I’m out of the loop but one of the more surprising things to me in this story is that the Pokemon game is still going strong.

The other month on a trip I couldn’t figure out how to start one of those electric Byrd Scooters & the security guard in the La Quinta parking lot where I found it helped me out. In return I let him take a spin around the hotel & when he came rollin’ back he said something along the lines of, “Man, you could get so many more Pokemon using this thing.” Yes, he looked like the teen who works at Krusty Burger in The Simpsons, but I was still taken aback.

I rolled off into the night pondering the lasting popularity of a virtual game craze, likely as San Yuan was rolling home in the wee hours of the morning on the other side of the world from playing it. 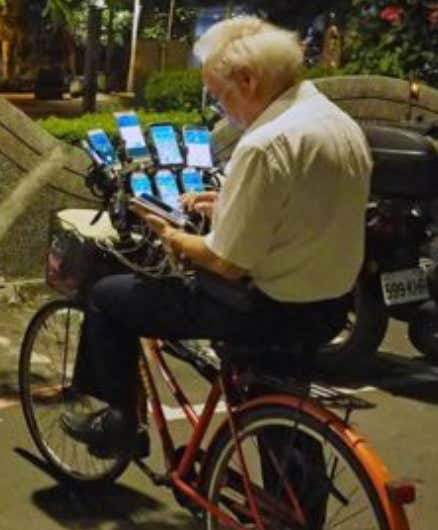