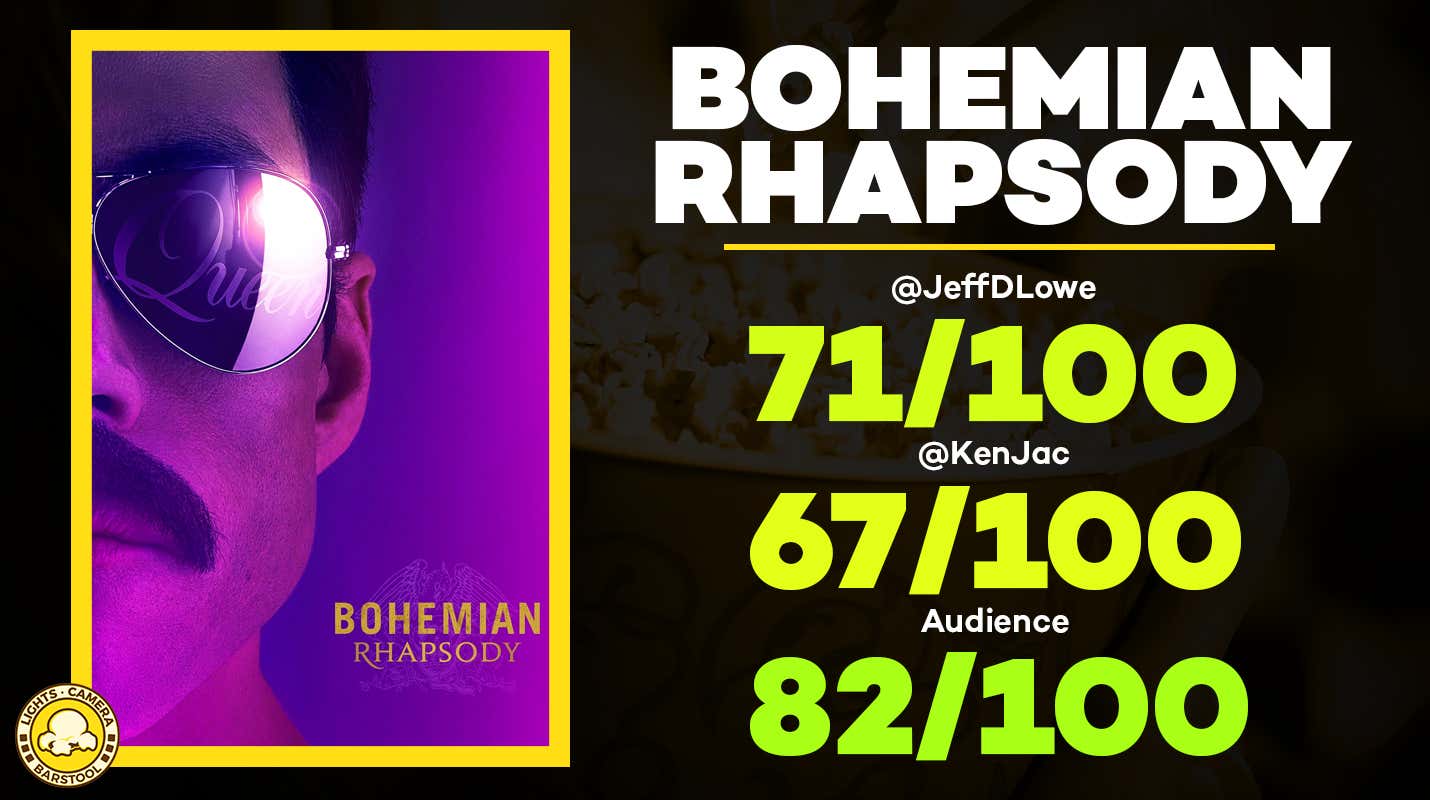 One of the most anticipated releases of 2018, ‘Bohemian Rhapsody’ opened to big box offices numbers and high praise from fans but low praise from critics. Where do the Big Time Movie Boys fall on that scale? Let’s find out…

Jeff (71/100): Even with Rami Malek’s great performance and a stellar recreation of Queen’s Live Aid performance, ‘Bohemian Rhapsody’ falls well short of properly doing justice to the legend of Freddie Mercury. Focusing more on the story of Queen, the movie’s lack of depth when it comes to the complex and important life of Freddie Mercury results in a rather bland final product.

Let me get this out of the way from the start: this is not a bad movie by any stretch of the imagination. The visuals are all great, especially in any scene where Queen is performing. You truly feel like you’re at the concert and experiencing it like those who actually got to see it live decades ago. This is especially the case for the Live Aid performance, which is a virtual shot-for-shot copy of the band’s original legendary 1985 performance. It’s truly captivating to watch and one of the standout scenes from any 2018 movie. Award season buzz will also arrive for Rami Malek, who did a great job as the lead role. He was able to capture the flair as an entertainer and his emotion off the stage. That humanizing emotion and struggle, despite being a larger-than-life star, is what makes the story of Freddie Mercury so interesting. I just wish we could have seen more of that from Malek had the story been more catered in that direction.

By now, most people know that Sacha Baron Cohen was set to portray Mercury back in 2010 before he left the project due to creative differences. Queen guitarist Brian May and the band wanted a more family-friendly approach, while Baron Cohen wanted a more adult-oriented, gritty look at Mercury’s life. Now, obviously, at least in my eyes, the Baron Cohen version of the movie sounds better when you consider the crazy lifestyle and tragic events of Mercury’s life. Rating and reviewing the movie based off of what could have been would be unfair, but there were plenty of things lacking in the actual movie that was released.

This is such a paint-by-numbers biopic and it’s a real shame. I love Queen, they’re a great band with so many iconic songs, but too much of the movie focuses on the Queen angle and not the Freddie Mercury angle. Every time it dips away from something about Freddie, I found myself rather bored. A big part of Mercury’s story, being gay in a time where it was wildly misunderstood and not accepted, doesn’t really get the focus it deserves. The movie brushes the subject just enough to acknowledge it, but avoids going for any substance. Not every movie has to be a social commentary, but treating Mercury’s sexuality and hardcore partying lifestyle like some sort of “bump in the road” during Queen’s story as a band is just a disservice to the man. Everything is so formulaic and lacks any risks taken whatsoever. On top of that, while I do love the Live Aid scene, a movie’s “big draw” shouldn’t just be a remake of a better version of something you can just go watch on YouTube.

NOTE ABOUT TRUE STORY MOVIES: I won’t dock any points for movies being inaccurate because I have to review what I am given. For example, ‘Argo’ and ‘Frost/Nixon’ are two of my favorite movies and they both take some liberties in a few places to heighten the drama. Hey, it’s Hollywood, that’s just how movies work. With that said, ‘Bohemian Rhapsody’ has a few glaringly inaccurate changes to the timeline of Freddie Mercury’s life. It’s sort of strange, especially considering how heavily involved the band was in helping make this movie. They were worried about Mercury’s legacy when they cast Sacha Baron Cohen, yet this movie is twisted in a way that almost makes the entertainer look worse than he really was as a friend and bandmate. It all left a bit of a bad taste in my mouth as I left the theater.

Overall, ‘Bohemian Rhapsody’ does everything that the creators of the movie intended it to do. Audiences mostly love it and it’s easy to see why. There is plenty of good Queen music, great visuals, and an engaging lead performance. I had fun going to see it, but when you look at the nuts and bolts of what’s really there, you get an average, if not mediocre, biopic at best.

KenJac (67/100): Queen is a band that took a ton of risks in music, but ‘Bohemian Rhapsody’ is a very by-the-numbers affair for cinema. It’s highlighted by an amazing performance from Rami Malek, but outside of him, there isn’t a ton to take away.

Rami Malek does an outstanding job playing one of the most influential and well-known icons in musical history. I can’t even begin to imagine the amount of prep involved in this sort of portrayal, but it totally paid off. Outside of that, I didn’t feel like I took a ton away from the movie. They rearrange a lot of timeline events in Mercury’s life and really make him seem like sort of a selfish asshole that abandons the band. The heavy lean in telling the other band members stories and contributions over Mercury’s is one aspect I’m aware most critics and I might have been looking because of how fucked up the movie was in the production process.

Sacha Baron Cohen was originally supposed to play the lead and tried to get the movie made for six years. He ended up leaving when his vision, which included a higher focus on Mercury and his darker side, was denied by the remaining band members who wanted to protect their legacy.

It was still beautifully shot, with outstanding set pieces for each respective time period. They also didn’t rely too heavy on CGI, although that which was present didn’t look great. It’s no disservice to Mercury or the band by any means, but it felt more like reading his Wikipedia page and less like an experience which is what you might expect.

—
This movie is not yet Officially Buttered even after a high score from our audience. Trillballins’ will decide if the movie is buttered when he drops his score on tomorrow’s Lights Camera Barstool. Make sure to subscribe to Lights, Camera, Barstool where we will review ‘Bohemian Rhapsody’ in depth and remember to rate all 2018 movies below.