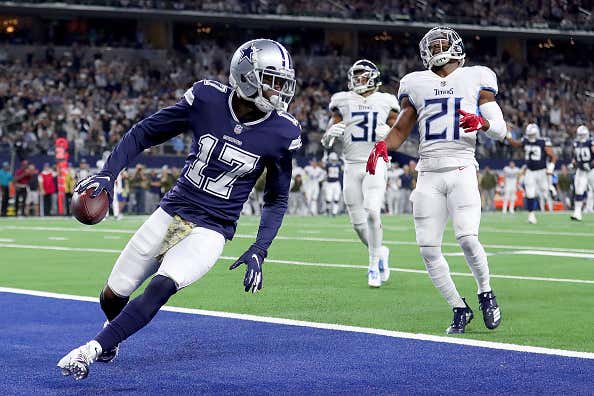 I was done talking about Malcolm Butler for this season, I truly was. I’ve posted about 2018 Malcolm a couple of times already and mentioning again how objectively terrible he’s been yet again would’ve just felt like piling on. Or hitting a defenseless receiver. And I have no intention of being the Vontaze Burfict of bloggers. Not toward anyone. But especially not toward a guy who provided us with a Top 3 moment of our sports lifetimes and is a great American success story.

But then last night this happened:

Which, OK, was a tough moment obviously. But also a nice route run by Amari Cooper that can be tough to defend, as we saw Julian Edelman use it twice in the very Super Bowl that Butler saved. So no shame there. But then there was this one, with Malcolm Go now on Allen Hurns:

Ouch. That’s tougher defense to defend. You know it’s bad when your league’s social media account is talking shit to you on behalf of the receiver who just burned you. And that touchdown took us from this to this:

Now before we go any further, please promise you’ll listen to what I am saying to you. I am putting open hands on either side of my face and yelling very slowly “This is NOT about Butler getting benched in the Super Bowl!!!” It simply is not. There’s a weird dynamic that happens whenever you bring up the topic of Titans Butler strug-gl-ling where everyone wants to argue with you about February in Minnesota. It’s like when your wife starts to realize you might actually be right in the argument you’re having so she begins to pivot the discussion around to that time in Italy when she wanted to go in this one direction but nobody would listen to her even though she turned out to be totally in the right. (If that seemed very specific, I’ll leave you to speculate how autobiographical it is.) I’m not here to relitigate the past. I’m talking only about the present. And with Butler’s performance last night and Tennessee on the schedule this week, I’m left with no choice.

In an offseason so overstuffed with controversy that you had to sit on it to get the zipper to close, transitioning from Malcolm Butler was the second best personnel move the Patriots made. (Behind only letting Nate Solder go to the Giants to get Eli Manning killed and replacing him with an actual giant in Trent Brown. But that’s a topic for another time.) A few numbers to make my point:

–Among cornerbacks who qualify, Butler has the 4th highest Passer Rating when targeted, 140.6.

–Pro Football Focus has him ranked as the 82nd best corner in the league.

–Mike Vrabel has begun to take him off the field, as his 384 Total Snaps and 244 Coverage Snaps (through eight games) is significantly less than Jason McCourty’s 491/344 (in nine games).

–Butler has one Interception this season and five Passes Defended. Jones has two picks and six PDs.

That’s as unpleasant for me to say as it is for you to hear. Everything Butler accomplished in New England has its own roped-off, reserved, VIP table in the nightclub of my soul and always will. But facts are often like that. And the unpleasant fact in this case is that Bill Belichick made a great move … say it with me, now …  in the best interest of the football team when he let Butler walk. When he didn’t do what I and you and everyone we care about in this world would’ve done, which is think with our hearts and paid him whatever he wanted. Belichick thought with his towering football intellect. He relied on his genius for gauging performance as well as managing the cap and every  day we benefit from his unemotional, rational judgment. You can argue that he might have moved on one game too soon, but we’ve had that conversation. This time he was spot on. Still sad, but positively true.

P.S. It’s going to be wild to see if Josh McDaniels and Brady go after Butler like ever other team has. I shudder to think what Josh Gordon could do to him.