https://www.instagram.com/p/Bpz2nniFzXE/
Chris Johnson, a former member of the Tennessee Titans, New York Jets, and Arizona Cardinals announced his retirement from the NFL yesterday at the age of 33. Something he could have done of PMT a few weeks back, but that is neither here nor there. During his first 5-6 years, Johnson was one of the most electric players in football. He was must see TV. As a Titans fan, I loved him the second he was drafted 24th overall in 2008 out of ECU. I remember talking to someone who said Johnson would be a bust because he never played against anyone in college. I called that guy an idiot and told him to watch. Literally anytime he had his hands on the ball he was a threat to take it 90 yards, and he did just that a few times.
Johnson was the fastest guy in football the second he laced them up at the combine. He set the then record for fastest 40-yard dash at 4.24. 4.24 is fucking fast. It's scary because he probably was faster IN pads than at the combine. The second he got his hands on the ball he was a freak. Made him a great RB to play with in Madden too.
https://www.youtube.com/watch?v=9k-WgXTavTQ
He made noise in the league during his second year when he ran for 2,006 yards, 14 touchdowns on the ground and had an additional 503 receiving yards with 2 touchdowns receiving, he set the NFL all purpose yards record that season with 2,509, not bad. As a Titan he ran for 7,965 yards and 50 touchdowns in 6 years. Not to mention the 2,003 yards receiving and 8 touchdowns he had through the air as well. He was the ultimate weapon. Love his nickname of CJ2K as well, that of course was given to him when he ran for 2K yards. And when he was paired with Lendale White, they were named "Smash N Dash". Titans were unstoppable running the ball with those 2. Some nice accolades for CJ too, 3-time Pro Bowler, NFL Offensive Player of The Year in 2009, First Team All Pro in 2009, and most scrimmage yards in a season.
Johnson would go on to end his career in Arizona after being a platoon guy/injury replacement for a few seasons, but finished his career with pretty good numbers. 9,651 career yards in 130 games over 10 seasons in the league, good for 35th all time. He also scored 64 touchdowns, with 55 of them coming on the ground.
HE was the most fun player to watch in the league when he was young and you could see why. He was a firework with cleats on. It's also pretty wild that he was only a two-star recruit coming out of high school and chose ECU over Uconn and Eastern Kentucky. Could you imagine if Cj2K went to Uconn? Yuck.
His 2009 season may be one of the best seasons by a running back…ever. Just look at the numbers. 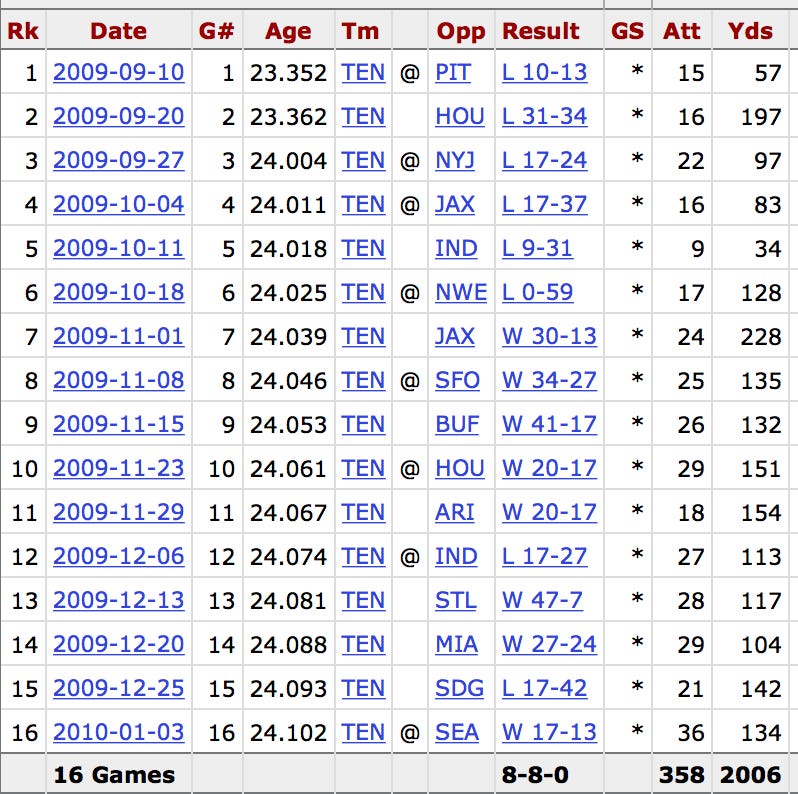 11 straight 100 yard games to end the season which includes a 228 yard game, a 151 yard game, a 154 yard game, and a 142 yard game. Monster numbers on a team with Vince Young at QB so you KNOW the other team was loading the box. Johnson was a special talent man, will alway be one of my favorites.
PS. People forget he raced a cheetah.
https://www.youtube.com/watch?v=7FYmYMb-kIU
PPS. He lost.