As many of you know, or should know from reading Hard Factor Mark’s blog, Hard Factor is going to be profiling some of our favorite candidates who are running for office in Tuesday’s crucial midterms.  My pick is a man with VERY BIG DICK Energy, House of Representatives Candidate, Denver Riggleman.

Denver Riggleman, what a name huh?  I mean, naming your kid Denver is pretty much guaranteeing him a life that could go one of two ways.  The first way being a life filled with man stuff, like owning a craft distillery, being in the Air Force, running for The House of Representatives in the great state of Virginia, and perhaps most importantly, having a little bit of an obsession with bigfoot, and some say, with bigfoots giant dick.  On the other hand, naming your kid Denver could curse him to a life full of trying to fit the mold of a guy named Denver, like being obsessed with hiking and camping, working at REI, exclusively driving Ford Broncos (although the 2020 Bronco is slick), and most likely being way too into beard health. Luckily for us, Denver Riggleman picked the first path.

The seat that Republican Denver Riggleman, and his opponent, former 60 minutes producer and author Leslie Cockburn (yikes, “Cockburn”, I’ll let you guess her party affiliation), are vying for is being vacated by Virginia Representative Thomas Garrett because Ol’ Thomas has a little bit of a drinking problem (I feel you buddy), so much so that he is giving up what I can only assume is a pretty lax job that pays around $175,000 a year; especially since reports were that he was using his staffers like servants.

Now, let’s get to the “meat” of this race.  Leslie Cockburn is claiming that Denver Riggleman is a “devotee to Bigfoot Erotica.”  Quite the claim.  What is Bigfoot Erotica you ask?  Well it’s basically monster porn.  In most cases a distressed woman is captured by a beast, such as Bigfoot, ravished, and then becomes obsessed with how awesome the experience turned out to be.  Why does she think this?  Well back in 2006, Riggleman co-authored the book “Bigfoot Exterminators, Inc.: The Partially Cautionary, Mostly True Tale of Monster Hunt 2006.”  I imagine they got REALLY close to finding bigfoot on pretty much every hunt in that book, but it WAS NOT erotica.  So where does the “erotica” claim come from?  See below.  Also see a photo of Cockburn below. 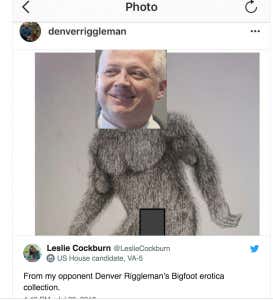 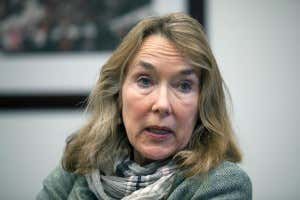 That picture, posted by Riggleman to promote his new book “The Mating Habits of Bigfoot and Why Women Want Him,”  is Cockburn’s main claim that he is obsessed with Bigfoot Erotica, which is TOTAL BULLSHIT.  Riggleman explains that the picture and book are all a long running joke with his military pals, I mean who hasn’t had their buddies photoshop their face on a monster with a giant dick?  It’s a classic gag!!  And who has not written a parody book about the mating habits of fictional monsters?  Gimme a break Cockburn…..Me thinks the lady doth protest too much….

At any rate, get out there and vote, those “I Voted” stickers are the easiest way to look informed and tell everyone “I stood in line and voted for a lot of people and other stuff I had no clue about”

GET YOUR HARD FACTOR MERCH HERE

LISTEN TO ALL EPISODES HERE